Shortly before publication, received word of the death of J.R. Ewing after a long battle with cancer. He was the villain that TV viewers loved to hate and will deeply be missed by many. 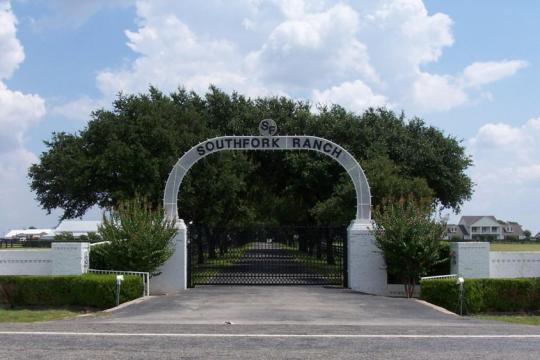 Things are always bigger in Texas, and Southfork Ranch has always been portrayed as one of them. Starting in 1978, this was home to the Ewings and the rest of the world arrived as weekly guests on Dallas. Here guests could dream of life as an oil millionaire, including shady dealings and dysfunctional family dynamics.

Today a tour of the set for the TV show is destination for many fans of Dallas, both the old show and the recent revival.  In Parker, Texas, guests can tour the Visitors Center and the pillared Ewing Mansion to hear stories and see memorabilia of the extravagant 340-acre Southfork Ranch.

Re-live some of the memorable moments from  Dallas, at one time the world’s most popular TV show, in the “Dallas Legends” Exhibit. See the gun that shot J.R., Lucy’s wedding dress, video clips from the series, interviews with the stars, and other memorabilia that will make you feel right at home with the most infamous Texans of them all, the Ewings.

Take a tram from the Visitors Center en route to the Ewing Mansion. You’ll hear a history of the ranch, and see Texas longhorns and American quarter horses. As you approach the Ewing Mansion, the driveway seems much shorter than it did on the TV show. A special filming technique, or perhaps camera magic, was used to make it appear much longer, thus more elegant. Actually the entire ranch was much smaller than the show portrayed.

At the famed Ewing Mansion, a tour guide will give interesting tidbits about the years of filming, and insight into the character of the Ewings. J.R. seems to be the name that first comes to mind when Dallas is mentioned.  His ethic for the business world was one word – win, but he had an equal passion for women. Guests are given a full guided tour of the “most famous White House west of D.C.” where they even get a glimpse of J.R.’s bedroom !

Found it interesting that Miss Ellie’s kitchen had a window to the entire ranch. Southfork Ranch originally belonged to the family of Miss Ellie. When they were about to lose it, she wisely married Jock Ewing to save the ranch, but came to care about him deeply as the years progressed. Here the mother of the Ewing family could keep an eye on what was happening. Many interesting conversations regarding business and family took place with Miss Ellie in this kitchen.

Rest at the pool in the beautiful Southfork gardens where Dallas was filmed. On the right side of the picture you can see the edge of the balcony where J.R. was shot…the end of a season that made viewers eager for the fall season to return.

As you depart the Mansion, feel free to stroll through the ranch grounds, and stop and visit “Lincolns and Longhorns,” displaying Jock Ewing’s original 1978 Lincoln Continental. Guests can shop here for “Dallas-inspired” men’s and ladies’ apparel, decor, and accessories.

Return to Dallas today, the show and Southfork, as some original members of the cast are back to fight the next generation of Ewings for power. As John Ross said at the end of episode one for the new Dallas, “The fun is just beginning.” But now the question will be, can the show continue without the outrageous and compelling J.R.?

Southfork Ranch is located in Parker, Texas just north of Dallas. Take US 75 north to exit #30, Parker Road. Travel east on Parker Road for five and a half miles, then take a right on FM 2551, also known as Hogge Road. The entrance to Southfork is immediately on your left.

“Want to take a ride?” Those were familiar words growing up, as my father always enjoyed a drive through the country, at any season of the year. While mom always went along, she never enjoyed them as much as father and daughter. Since we liked to explore all the back roads, mom came to calling us “gypsies”. The passion for exploring has never left, so now you know a little background for my blog, Gypsy Road Trip. 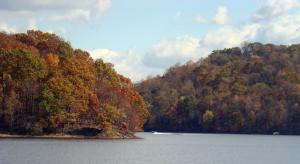 This beautiful autumn Sunday Drive in the hills of  Southeastern Ohio began at the dam of nearby Salt Fork Lake.  With fluffy clouds in a bright blue sky, the shades of autumn leaves were reflected off the calm lake. Tranquility surrounds you here interrupted only by the distant sound of a speedboat sliding through the waters. Sit and soak in the sun and grab some fresh ideas floating through the air.

Sunday Drives are aimless ventures and who knows where the next random turn will lead. Along the side of the road the autumn colors catch your eye where a large red and white striped tent is fall home to Center Creek Farms. Here families  stop to let their children explore the scarecrows, pumpkins, and wagons that are all part of the fall scene. There is even a pick-your-own pumpkin patch so everyone can see pumpkins at their various stages from green to orange. No roadside stand at this time of year would be complete with out apple cider, preserves and honey. Bought a jar of local raw honey as it’s always good to ward off a cold when a sore throat first starts to develop.

Farther down the road, an old Studebaker pickup is loaded down with autumn treasures at the Troyer’s Country Market.

There’s a cute scarecrow driving this load of beautiful mums, pumpkins and other autumn decorations. Mums were brought to the United States back in colonial times and colors range from the traditional yellow shades to oranges, purples, and pinks.  Since they are  ‘short day plants’,  chrysanthemums bloom in the autumn when the nights are longer.  A pot of beautiful mums will brighten your life, or the life of a friend, for perhaps several months. 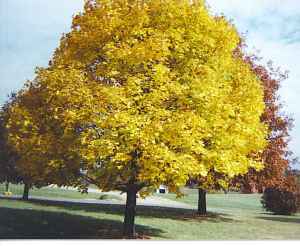 Sometimes a single tree can catch your eye as it glows like a ray of sunshine.  Here a golden maple tree is the center of attraction in someone’s beautiful yard. Temperature and moisture are the two elements that determine the amount and intensity of autumn colors. The most beautiful colors occur when there is a series of warm autumn days with cool, but not freezing nights…following a year of a warm, wet spring with normal summer rainfall. With those determining factors, every autumn brings about a new spectacular display. 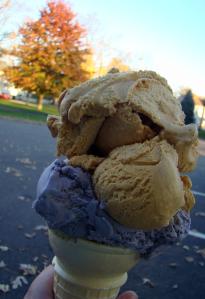 Had to top off the day with a stop in West Lafayette at a favorite ice cream stand. Noticed that keeping with the season they had pumpkin ice cream, so had to give it a lick. Wasn’t sure if the pumpkin would be something to my taste, so had them put a scoop of raspberry on the bottom so there would definitely be something deliciously satisfying. Both flavors hit the spot!

Any season of the year is a great time for a drive through the countryside wherever you happen to live.  If  for some reason you can’t take a drive, stop back and read another gypsy jaunt here on Gypsy Road Trip. Enjoy the adventure!

Back Roads, Just for Fun, Ohio

Dickens Mannequins on the Move Volunteers Make It Possible

What is a volunteer? Although this isn’t a Webster’s Dictionary definition, Margaret Mead seemed to understand the role of volunteers when she said:

Never doubt that a small group of thankful, committed citizens can change the world; indeed, it’s the only thing that ever has.

In the small town of Cambridge, Ohio, a group of volunteers may not have changed the world, but definitely have changed the face of Cambridge during the months of November and December. Over 200 volunteers work almost year round to make Dickens Victorian Village a big success.  As the director would say, “It takes a village to run things.”

After the Restoration Team worked at Dickens Universal all summer long to make and repair heads and bodies, fix or replace clothing, and even build whole new scenes, finally the day arrived to move them to Wheeling Avenue for Dickens Victorian Village.  This is no easy task to move 186 mannequins. Some of them were moved on an old trolley that was given to the village, while others were hauled on trailers. 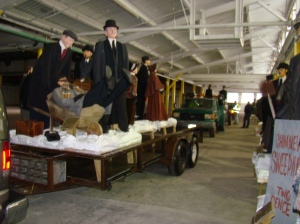 Wonderful volunteers lined up inside Dickens Universal while mannequins were loaded onto the trailers behind their trucks and vans.  Usually this is done on the weekend, but due to Hurricane Sandy this year, it was delayed. So men appeared after work to load their trailers and take them to the appropriate spots in downtown Cambridge. Keeping them in order wasn’t a big problem as they are stored in order at Dickens Universal.  It’s a long warehouse and there’s enough room to make it appear like a walk down Wheeling Avenue – just not as much sidewalk in between! 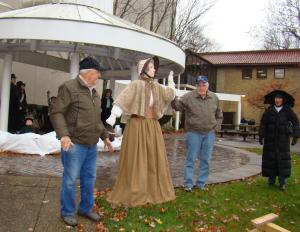 Once downtown, finishing touches had to be made. Skirts were attached around all the scenes, most containing more than one mannequin. Then everything needed to be securely attached as a caution from further wind storms. Long metal rods were placed beside some mannequins to hold them in place.

But when it is all finished, the volunteers have a sense of pride in their long year of hard work to make downtown Cambridge have a festive air.  Even though the hurricane had made 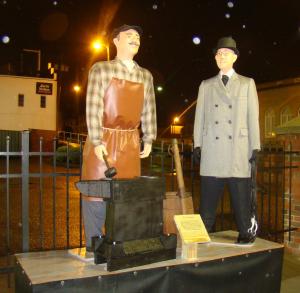 its way north, rain still fell for the entire time of mannequin invasion.  One of the new scenes, The Blacksmith, was getting its first taste of being out in the weather.

Take a walk downtown to enjoy a look at days of old. Each scene has a descriptive plaque telling a little history of that particular scene. For the volunteers, work doesn’t stop here.  During the Dickens Victorian Village season from Nov. 2 – Jan. 5, the restoration team checks on mannequins daily repairing costumes, reattaching loose items, or sometimes even changing costumes completely.  These people really care about appearances and are very particular about each scene. Yet they have lots of fun working together! As Tiny Tim might say: “God bless them every one.”

Dickens Victorian Village is open in downtown Cambridge, Ohio from Nov. 2 to Jan. 5. Cambridge is easily located as it is at the crossroads of I-70 and I-77 in beautiful Southeastern Ohio.  Perhaps you will get a chance to visit this holiday season and feel the Magic of Dickens in the air.