Downtown Cambridge has been transformed into a bustling city with the opening of the fifth year of Dickens Victorian Village.  It is hard to imagine the change that has occurred in such a short time.

Just imagine one evening when the downtown Chocolate Walk was taking place.  There were cars, buses, and people all up and down the streets of Cambridge.  It was as busy as a summer resort town with beautiful Christmas music playing in the background as visitors went from store to store collecting chocolate surprises.

Fun is had by all ages at Ye Ole Curiosity Shoppe.  A favorite part of the day is going to Imagination Station and putting on the dress of the Victorian era. Ladies can wear a  long dress or skirt, fur coat, stylish hat, and even gloves or jewelry. Men can don a top hat and cape and even sport a dashing cane. Then have their picture taken for a great souvenir.

Here you can also find a Christmas treasure to take home with you.

The downtown courthouse also has the best Christmas Light Show ever, perhaps the best in the state of Ohio.  Our local communications team organized the project and has synchronized thousands of pulsating lights to the Christmas songs to provide an exciting and colorful display. Each year something new is added so it never loses its appeal and excitement to those who enjoy the treat. It runs from 5:30 t0 9:00 each evening for the enjoyment of visitors and residents alike.

Hot chocolate is available from the peddler’s shop on the square to warm the hands and heart. If it is a very cold night and you are there early, you may be lucky enough to find a parking place near the courthouse.  Then you can watch the show from the comfort of your car and even listen to the light show music by tuning to the local radio station, 102.7 FM. Be cautious as you travel this area and try not to stop in the middle of the street to watch the beautiful lights.  It is quite a temptation!

If you want to step back in time even further, you can ride one of the horse drawn carriages that take passengers a slow ride down historic Cambridge’s Main Street where you can see the created Dickens figures, handcrafted by local artists.  The carriage rides also add a little glamour to the evening with their  lighted wheels rolling down the street.

This is a hometown project that has really taken off and brings people into the city for the special events surrounding the Dickens Victorian Village.  A local businessman, Rob Ley, had an idea and started making sketches of Victorian figures.  With the help of local artists, the figures became a reality. The scenes created line Main Street of Cambridge and tell stories of life in years past.  If you get a chance, drive to Cambridge some evening to view the lights, Dickens figures and maybe even take a carriage ride with a cup of hot chocolate.

In everything both great and small

The hand of God is over all

These words were the first thing to catch my eye when visiting the Glen Rock Amish School near Adamsville.  There was a peacefulness about the classroom that was very noticeable and unusual for a school setting. Students and teachers talked in a very soft voice to promote the calm atmosphere. 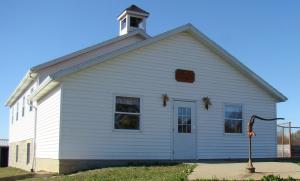 This one room school had approximately 25 students and two teachers.  Heat was provided by a gas furnace from a well on the property.  Lighting was generated from a solar panel in the roof of the classroom.  There was no evidence of electricity being used for anything.  Perfectly clean outdoor restroom facilities were located right behind the school.

School days are from 8-3 from September through part of May.  Students either walk to school or are brought by their families using a horse and buggy or a pony wagon.

All of the students were of thin build.  The obesity problem that is noticed throughout the United States was not evident in this Amish school setting.  They did have a basic playground of merry-go-round, slide and swings and were playing when we arrived.

Other signs on the wall showed their deep base in religion as both sides of the classroom had a sign that said:

Beside this saying there were cards for each student with indications of how many verses they had learned.  German Spelling was also noted on the walls as they learn to write German first and on Fridays they use only German in school.

With a few soft words from the teacher, students moved smoothly to one side of the room and shared the old traditional school desks with inkwell hole and pencil holder at the top and fold down seat. Song books were passed down the rows and students joined in singing two songs of religious nature, one of them being ‘Mansion Over the Hilltop’.

Our next stop was Country Lane Pantry, an Amish kitchen, whose smell met us in the driveway. We were seated at long tables and served generous servings of chicken, roast beef, mashed potatoes, homemade noodles, green beans, and a special coleslaw.  Of course there were fresh baked rolls with homemade strawberry jam.  In case you weren’t yet full, they also had delicious black raspberry, apple or cherry pie for desert.

Outside everyone was greeted by the friendliest little dog called Snowball.  He enjoyed lots of attention and even posed for a picture.

Now time for an Amish buggy ride driven by one of the young men of the community and pulled by a horse named Pete.  We were taken through the hay fields and told more about their settling in the area.  It was a cool day but the canvas sides were closed and provided a

comfortable ride.  There was a switch inside for battery operated lights when needed in the evenings.  What a great day to become acquainted with our Amish neighbors.