Dogwood Pass – The Old West Still Lives on in Ohio 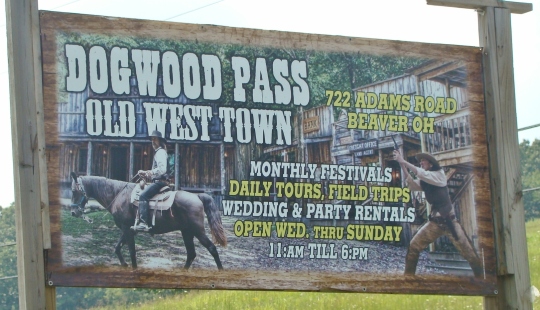 If you want the feeling of the Old West right close to home, head on down to Dogwood Pass in the hills of Southern Ohio. Many roads head that direction. All are scenic. 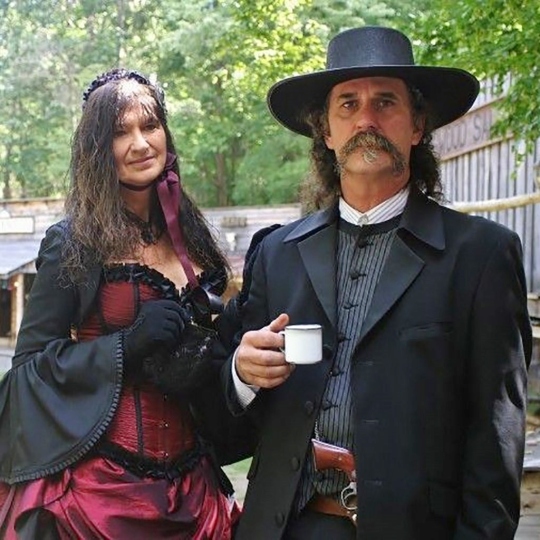 Twenty-five years ago, Sharlene and Frog were married under a tree on the land that is today Dogwood Pass.

This Western town developed rather recently in Beaver, Ohio as an idea of Mike “Frog” Montgomery. Now, Frog has always had a passion for the history and life of a cowboy. He grew up on the farm that today holds Dogwood Pass. Why, he and Sharlene even got married on this spot twenty-five years ago.

Nikki and Zoe served as barmaids in Dogwood Saloon, where the strongest drink was ‘root beer’.

One thing Frog always wanted was his own saloon to hang out in after horseback riding or hunting. In 2009, he decided to build a saloon in his back yard. Just for a hobby! Even Mike admits that his hobby went wild…Wild, Wild West, that is.

Sit back on wooden benches to watch “The Bank Robbery at Dogwood Pass”.

Not only is there a growing village, but a couple times a day you can see a live Wild West Show, “Bank Robbery at Dogwood Pass”. There’s a whole lotta shootin’ and chasin’ goin’ on, including a jail escape.

Children took part in a special show at Dogwood Pass.

A special children’s show lets children decide if they’d rather be an outlaw or a deputy. Most want to be outlaws! Everyone takes an active part in the show.

Every year the Montgomerys hold a cystic fibrosis event in honor of a dear friend who suffered with that illness. The Brad Schneider Memorial, very important to the Montgomerys, is a day when all proceeds go to someone currently fighting Cystic Fibrosis. 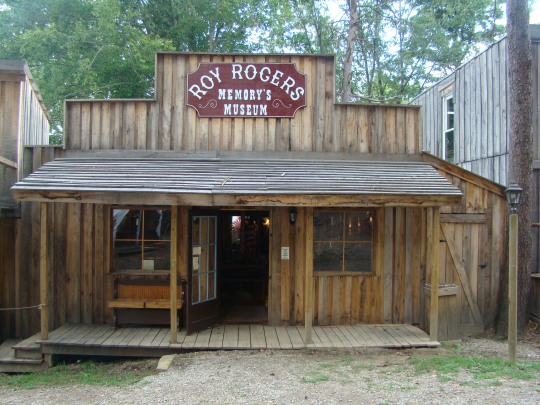 Frog is pleased to have a growing Roy Rogers Memory Museum.

Roy Rogers Memory Museum displays photos and movie posters along with some of Roy and Dale’s clothes and guns. Frog continues to search for Roy Rogers’ memorabilia to showcase at this western museum. 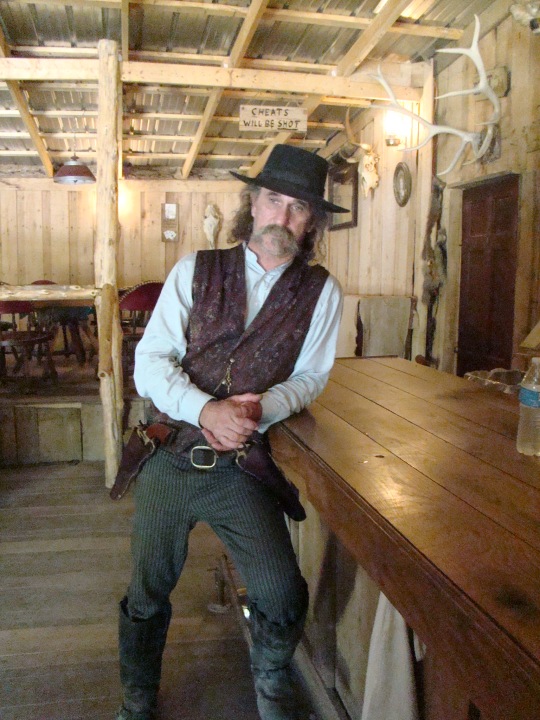 “Frog” Montgomery leans on the saloon bar as he describes his dream.

That first building, the saloon, holds a nice gaming parlor and a beautiful bar.Their stage can accommodate bands or Djs. The strongest drink you can purchase there is “root beer”.

That bank robbery had the sheriff so confused he rode his horse backwards.

You’ll find Dr. Cochran’s office ready to help the injured right next door to the offices of Sheriff John Dillon. This sheriff can even ride his horse while sitting backwards in the saddle. 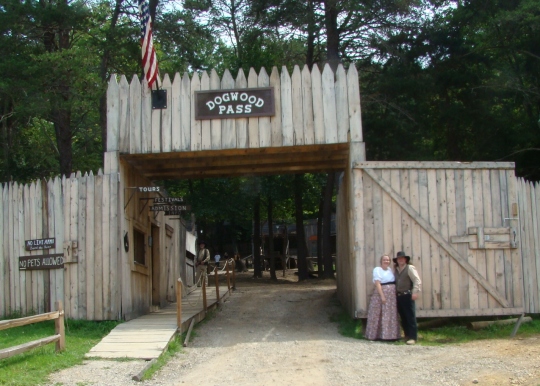 Costumed volunteers greet visitors as they enter the gate.

This is a family venture, now aided by about 75 volunteers that help run Dogwood Pass. One thing Frog is adamant about – all voluteers must dress in authentic western costumes. Actually, Frog dresses that way all the time, so people are quite used to seeing him in town with guns in his holsters.

Volunteers find it so much fun they travel miles to get there on the weekends. They drive from Cincinnati, Columbus, Springfield, and even indiana.

Horseback rides are available for children throughout the day.

Two movies have been filmed here. “Western World” tells the story of a sherrif faced with more corruption and deceit than he thought possible. A second movie still in the process of being finished, “Brimstone Saint”, involves a preacher who became a gunslinger to stop witchcraft in his small town.

Every weekend they are open on Friday and Saturday, usually from 11 -6. Check out their special events on their Facebook page or on their webpage at www.dogwoodpass.com .

A cowboy would visit the bathhouse for a shave, haircut, and bath.

In October, they have a Haunted Trail, then in December, a Christmas tour. Since Mike and his wife live right outside the fence, he never turns anyone away that wants to visit his town.

Weekend visitors range from 300 – 1000, and tour buses frequently make stops there. That’s why Mike is planning to build an amphitheater to have even more extensive Wild West Shows. 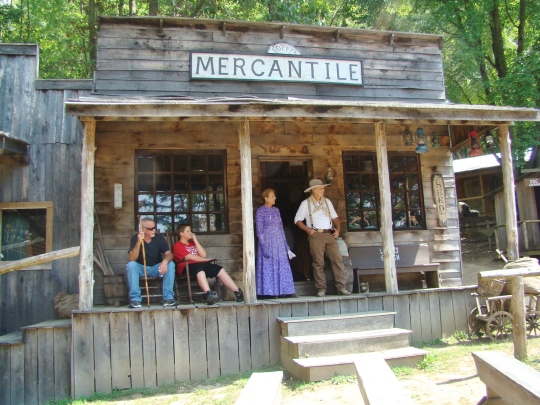 The mercantile held all the necessities for a cowboy. It was the perfect place to sit and watch a bank robbery.

If you don’t have the time to head out west, take a drive some weekend soon and visit the biggest Old West town west of the Mississippi. Mike’s a great country boy at heart and adds a personal touch by talking with everyone. You’ll feel welcome at Dogwood Pass.

Dogwood Pass is located in southern Ohio south of Chillicothe. The actual address for your GPS would be 722 Adams Road, Beaver, OH. It’s a back road trip anyway you look at it, but what would you expect going to the Old West.

Something my family has always done, anytime of the year, is take a Sunday drive. This Sunday my goal was the Fly Ferry, but along the way there were some interesting spots as well. Come ride with me!

For some reason, power plants attract me! This Willow Island Hydroelectric Plant was located across the Ohio River on my drive going up the river from Marietta, Ohio.

It was the perfect time of year for a Farmers Market to pick up some fresh Marietta tomatoes, sweet corn and a couple pieces of fudge. Valley View Farm Market even had a U-Pic section to pick your own peppers and tomatoes.

The Jug Restaurant in Newport, Ohio was a great stop for a refreshing drink and a chance to sit along the Ohio River for a while. They had a great mural of old cars on the side of their building as well as picnic tables and a nearby shelter.

It’s always nice to see families enjoying the day together. Here father and son walk along the pier as they enjoy the river scene.

This Illinois tugboat going up the river was pushing thirty barges. Later in the day they came back loaded and covered. People were guessing they were loaded with steel.

Reached the Fly Ferry in time for a couple rides at $1 per person from Fly, Ohio to Sistersville, WV. One time there were several motorcycles riding along. 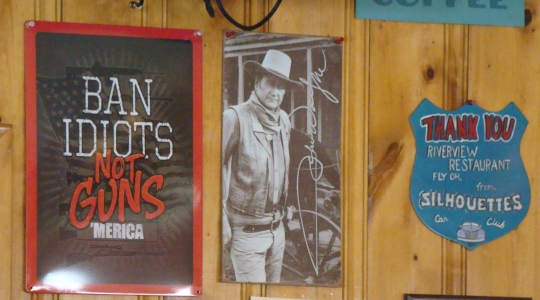 The Riverview Restaurant is a great place for a tasty lunch while watching the river activity out the window. Guess that’s why they call is Riverview! Had to agree with this sign on their wall next to a picture of John Wayne. 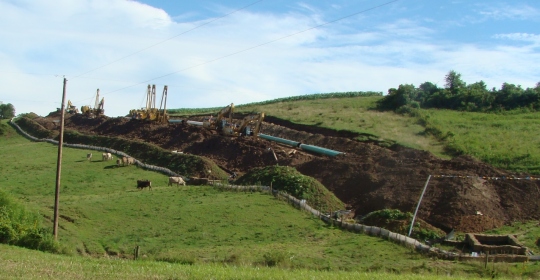 Heading home over a crooked back road made for a perfect ending for the day. Along the way the cows were learning to live with the pipeline that was invading their pasture.

Most of the way, farmland and beautiful homes and barns reminded me of a saying:

“In winter’s chill or summer’s heat, a farmer works so the world can eat.”

Almost home but stopped by Seneca Lake for a peaceful time by the water. This picture looks out from the dam area to that popular island for boaters.  Guess you can tell that hanging out near the water is a favorite pastime of mine.

One last stop before home to get a favorite ice cream cone from Orr’s Drive-In. Always enjoy that raspberry twist!

Maybe you can enjoy a Sunday drive in the country sometime soon. Actually, any day will work for me.