In everything both great and small

The hand of God is over all

These words were the first thing to catch my eye when visiting the Glen Rock Amish School near Adamsville.  There was a peacefulness about the classroom that was very noticeable and unusual for a school setting. Students and teachers talked in a very soft voice to promote the calm atmosphere.

This one room school had approximately 25 students and two teachers.  Heat was provided by a gas furnace from a well on the property.  Lighting was generated from a solar panel in the roof of the classroom.  There was no evidence of electricity being used for anything.  Perfectly clean outdoor restroom facilities were located right behind the school.

School days are from 8-3 from September through part of May.  Students either walk to school or are brought by their families using a horse and buggy or a pony wagon.

All of the students were of thin build.  The obesity problem that is noticed throughout the United States was not evident in this Amish school setting.  They did have a basic playground of merry-go-round, slide and swings and were playing when we arrived.

Other signs on the wall showed their deep base in religion as both sides of the classroom had a sign that said:

Beside this saying there were cards for each student with indications of how many verses they had learned.  German Spelling was also noted on the walls as they learn to write German first and on Fridays they use only German in school.

With a few soft words from the teacher, students moved smoothly to one side of the room and shared the old traditional school desks with inkwell hole and pencil holder at the top and fold down seat. Song books were passed down the rows and students joined in singing two songs of religious nature, one of them being ‘Mansion Over the Hilltop’. 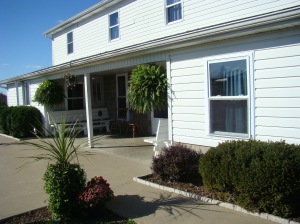 Our next stop was Country Lane Pantry, an Amish kitchen, whose smell met us in the driveway. We were seated at long tables and served generous servings of chicken, roast beef, mashed potatoes, homemade noodles, green beans, and a special coleslaw.  Of course there were fresh baked rolls with homemade strawberry jam.  In case you weren’t yet full, they also had delicious black raspberry, apple or cherry pie for desert.

Outside everyone was greeted by the friendliest little dog called Snowball.  He enjoyed lots of attention and even posed for a picture.

Now time for an Amish buggy ride driven by one of the young men of the community and pulled by a horse named Pete.  We were taken through the hay fields and told more about their settling in the area.  It was a cool day but the canvas sides were closed and provided a

comfortable ride.  There was a switch inside for battery operated lights when needed in the evenings.  What a great day to become acquainted with our Amish neighbors.