Brothers, we all belong to one family; we are all children of the Great Spirit. We walk in the same path, slake our thirst at the same spring, and now affairs of the greatest concern lead us to smoke the pipe around the same council fires.

These were the words of a wise Tecumseh as he requested support from all Indian tribes to battle the white man’s encroachment of their lands. Filled with vision and purpose, he frequently mentioned the Great Spirit and there was an attitude of prayer before all decisions were reached. 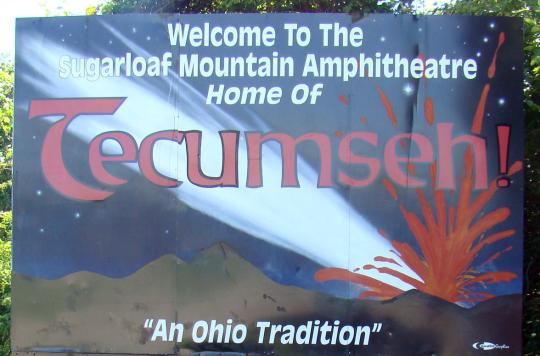 At Sugarloaf Mountain Amphitheatre near Chillicothe, Ohio a spectacular outdoor drama presents the story of “Tecumseh” each summer with a cast of nearly one hundred.  Since 1973, over 2.5 million visitors have sat beneath the stars surrounded by night sounds, to watch the story of a remarkable Indian legend. This beautiful amphitheatre seats approximately 1,700 guests and every seat gives a great view of the saga written by Allan W Eckert, Pulitzer Prize and Emmy recipient.

Before the show, cast members lead interested fans on a Behind-the-Scenes Tour, the only place cameras were permitted. The stuntmen of “Tecumseh” displayed firing of various weapons used in battle including the Brown Bess, Kentucky Hunter Rifle, and our guide’s favorite the 12 Gauge Shotgun.  At this point, the Indian shot another cast member off a cliff to display how they fell and the protection they were 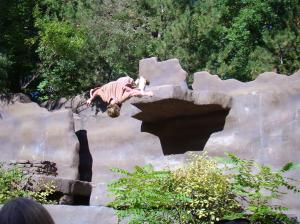 provided.  He said they always screamed before they fell for two reasons: first, to get all the air out of their lungs so a lung wouldn’t burst, and second, because it was really scary.

After visiting the stables where ten horses were kept, another cast member gave us some make-up and effects information.  She showed us how they were able to give the appearance of bleeding easily by using bags crushed to their body, eggs usually used on the head, and a knife where the handle was filled with red detergent.  Would have been nice if they had a knife like that for sale to fool friends!

Those are just a few of the highlights as it was an hour tour back stage and highly interesting.    Would definitely recommend it if you happen to attend a performance next season.

If you desire, there is a nice buffet available under a pavilion so you feel like you are eating outside with a fresh breeze relaxing the scene.  Also available is a snack bar, a mini-museum of Indian artifacts, and of course,  no tourist attraction is complete without a Gift Shop.

This is also a great time to exchange Tecumseh stories. An interesting one heard that day at dinner occurred when Tecumseh was visiting with William Henry Harrison. Tecumseh and Harrison were sitting on a log near the joining of the Tippecanoe and Wabash Rivers.  Tecumseh began to move closer to Harrison causing Harrison to move down the log.  This continued until Harrison was ready to fall off the log.  He questioned Tecumseh as to why he kept moving closer and closer to him.  Tecumseh answered by saying: “It is what you are doing to my people.  You are pushing them into the Great Waters.” 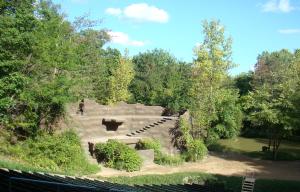 Time for the drama to begin and this scene to be filled with Shawnees as they planned how to save their land. Actual performance was about two and a half hours of non-stop drama with galloping horses, firing cannons, and dazzling battles.  Everything was spectacular including scenery, costumes, lighting, and sound effects.  At times the cannons and guns were so loud and fierce that you felt like you were in the midst of the battle.  A traditional Indian War Dance brought an impromptu round of applause from the crowd.

While Tecumseh attempted to be a man of peace, he saw the need for attack to drive the Whites from their country. This performance tells  the story of that quest ending with the Battle of Thames where Tecumseh went over the great divide.  No white man or Shawnee knows where their beloved Tecumseh is buried, but they feel his Spirit will return one day.  Tecumseh only sleeps.

Comments on: "Tecumseh Only Sleeps" (1)