Flintstones… Meet the Flintstones,
They’re a modern stoneage family.
From the town of Bedrock,
They’re a page right out of history.

Let’s ride with the family down the street.
Through the courtesy of Fred’s two feet.

Couldn’t resist stopping for a visit with Fred and Barney at Flintstones’ Bedrock City Theme Park near Custer, South Dakota. The Flintstones was the first animated comedy show on primetime TV, starting in  1960.  For those of you not familiar with the show, Fred and Wilma Flintstone and their neighbors, Barney and Betty Rubble, lived in the prehistoric town of Bedrock.  Here they faced all those age old problems with work, family and leisure that we still experience today.

At Bedrock, you have a chance to actually drive and propel one of those famous Flintmobiles.  This pre-historic car was owned by Fred Flintstone when he worked at the stone quarry. It was made of a tree trunk and rolled along on rock wheels…no engine, just foot power!  They have several of these at Bedrock today so many can get a chance for a ride, or at least sit in one of the cars and get the feel of Stone Age living.

Stroll through the streets and reminisce as you walk past Fred and Barney’s houses just across the field from each other. Peek inside the Stone Age setting of Bedrock City Fire Hall,  Rocko Gas Station and Water Buffalo Lodge, where Fred and Barney liked to have a guys night out. All the buildings are painted with bright cartoon colors, and there are statues everywhere. 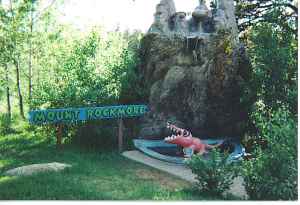 Since Bedrock is only thirty minutes from Mount Rushmore, it isn’t really surprising that they have their own mountain sculpture, Mount Rockmore. There are four faces here too: Fred Flintstone, friend Barney Rubble, the Flintstone’s pet Dino, and the founder of Bedrock, Mr Granitebilt.

Remember those days when Barney and Fred would stop at the Drive In on the way home from work?  When they put the loaded down tray of ribs on the side of the Flintmobile, it fell over on its side.  Now that’s a heavy meal! Stop by the Drive In Restaurant yourself  for a tasty treat of Brontoburgers, Dino Dogs, Chickasaurus sandwiches, or Rockbusters. 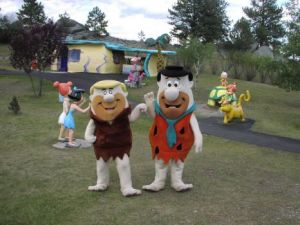 During the summer months, you will find a live Fred and Barney walking around Bedrock ready to shake your hand or have their picture taken with you.  Being part of a cartoon setting is great fun.

Bedrock City is a priceless piece of America along the route to the Grand Canyon. This is a great place for a family vacation as there are many places to explore in the area. Close by are the 1880 Train, Bear Country USA, and Rushmore Waterslide Park. You can stay at the Flintstone Campground in a cabin, tent, or your RV. For forty five years, Bedrock City has been giving enjoyment to old and young alike.

Spend your vacation in a cartoon and enjoy the wonderful world of Bedrock. Yabba Dabba Doo!

Bedrock City, South Dakota is located just off US Highway 16 west of Custer on Mt. Rushmore Road. Just watch for the Flintstones sign.

Hoping to Strike Gold in Venice