The Ghost of Walhonding at the Goblins’ Get-Together

Want to share a Halloween story in the spirit of the season as a diversion from my regular travel blog. Hope you enjoy!

Do you believe in ghosts? Melanie felt a bit skeptical, but her husband Jim refused to even talk about the possibility. Jim said that ghosts were as likely as a flying car.

On Halloween evening, they drove to the Goblins’ Get-Together at the popular Simply A-Maizing Corn Maze near an old coal mining town. Leaves floated down as a gentle breeze drifted through the valley on this beautiful Indian summer evening. The call of a hoot owl ensured vigilance under the hazy moonlit sky. 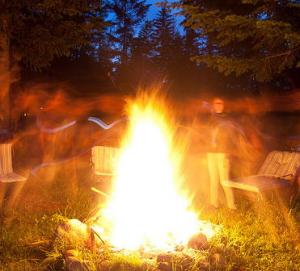 Friends gathered around a blazing bonfire, not to keep warm, but to watch the flames as they feathered into the air. Jim refused to wear a mask, even though Melanie explained, “Masks were originally worn to scare away the bad spirits, while people put food on the doorsteps to encourage good spirits. I’m wearing my mask just for fun.”

With moonlight dancing across the fiery autumn hills of southeastern Ohio, a mist rose from the nearby valley. All at once a cool breeze came out of nowhere. Melanie’s eyes glazed over with surprise and a shiver ran down her spine.

“What’s the matter Melanie?’ asked one of her friends, “you look like you’ve seen a ghost.”

“M-m-maybe I just felt a ghost! The icy air rushed past like someone opened the door to the freezer.” A faint smell of coal dust lingered in the frigid breeze. “Could it be the Ghost of Walhonding that our parents used to talk about? Remember those stories about the miner that was trapped in the coal shaft collapse?”

“Don’t be foolish,” grumbled Jim, “you know there isn’t any such thing as a ghost.”

At this old coal mining town, one friend suggested having a contest to see who could find the biggest lump of coal. They divided up in pairs and headed off in different directions.

Melanie suggested to Jim, “Maybe we should try over there by that old slate pile.” As they approached, they spotted a dirty young man walking by the pile where the silvery handiwork of nature’s lace maker glistened in the moonlight.

“We’re looking for a large lump of coal,” explained Melanie. “Do you live around these parts?”

“Been here all my life,” muttered the dusty man.

“Why sure. You wait here as I know a secret spot.”

In a few minutes, the young man returned with a beautiful large lump of coal. Melanie and Jim glanced at each other in surprise.

When they looked back, the dusty man had vanished, and a chill surrounded them; however, the coal remained at their feet.

Picking it up with quivering hands, they headed back to the bonfire. Everyone else decided the only coal left here was underground where the mine shaft caved in years ago, so Jim and Melanie’s find surprised everyone. Maybe later they would tell them of their encounter with the miner.

Could they have seen the Ghost of Walhonding and received his assistance? Who knows, maybe Jim will soon have a car that flies!

Glimpse Out of This World at MUFON Conference