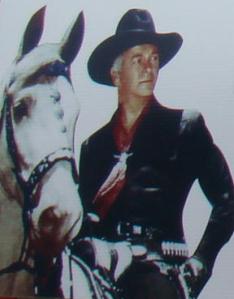 Hopalong Cassidy, “Pride of the West”, is also “Pride of Cambridge, Ohio”,  the boyhood home to Hopalong Cassidy and the Hopalong Cassidy Museum. William Boyd, aka Hopalong Cassidy, was born close by in Hendrysburg, Ohio in Belmont County back in 1895. While he only resided in Cambridge twelve years, they are still proud to call him a home-town boy. The family moved West at that time to Tulsa, Oklahoma, and at about the age of 20, William ended up in California where his good looks and winning manner were noticed by the film industry.

None other than Cecil B DeMille, who became a long time friend, took William Boyd under his wing, and got him his first acting contract at $25 a week back in 1918 as leading man in the silent film industry. When the role of fictional cowboy, Hopalong Cassidy, came up, director Harry Sherman felt William Boyd was a natural. In his black cowboy hat riding Topper, his white horse, Boyd soon became a national hero known for his gallantry and fair play. After 66 movies portraying Hopalong Cassidy, William Boyd became better known as Hoppy to his friends.

The story of his nickname began with Cassidy getting shot in the leg during a gun fight. When recovering from his gun wound, someone asked how he was feeling, to which he replied, “I’ll manage to hop along.”  Thus the name Hop-along Cassidy. After its success at the movie theaters, it was decided to have a Hopalong Cassidy TV series…also a big success. In 1950, Hopalong Cassidy became the first network Western television series. 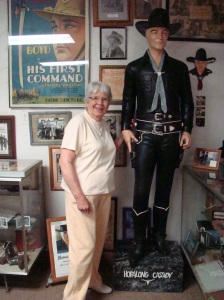 Forty years later, in the town of Cambridge, Ohio, Laura Bates was host of a show called “Talk of the Town” on their local television station. One particular day she was interviewing someone from New York doing research at the local library regarding Hopalong Cassidy. They commented, “It’s a shame no one in Cambridge ever did anything about Hopalong Cassidy, since he grew up here.”

Laura said, “That was like a slap in the face from the Big Apple.” After that, she began pursuing the idea and in 1990 it was decided to use Hopalong Cassidy for the theme of their Spring Festival.  Today, that Hopalong Cassidy Festival still is enjoyed by people from all over the world and is now held annually in May at the Pritchard-Laughlin Civic Center just outside the city.

Many movie stars attend the Festival to pay homage to Hoppy, one of those great cowboy legends. Hugh O’Brien from Wyatt Earp has attended as well as several stars of Gunsmoke: Bo Hopkins, Ben Costello, and Becky Burgoyne. Even William Boyd’s wife, Grace, has been in attendance.  Fans are still eager to catch a glimpse of these celebrities and perhaps obtain their autographs. 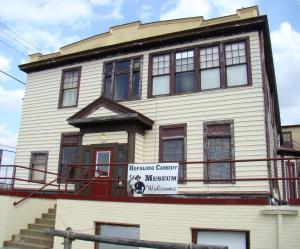 Today there is a museum in Cambridge, Ohio which houses a giant assortment of cowboy collectibles. Located at Scott’s 10th St. Antique Mall, this is a hot spot during the annual Hopalong Cassidy Festival. Three rooms are packed with Hoppy memorabilia, all part of a personal collection owned by Laura Bates, local Hoppy organizer and enthusiast. Here fans have purchased an old tin lunch bucket and thermos for the price of $395.00 or an Easter card signed by Hoppy for $195.00. There are many memorabilia available…for the right price. 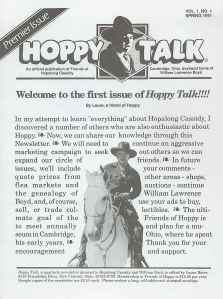 In his hey-day, Hoppy received around 15,000 fan mail letters a week. Today there is still a meeting of the Hoppy  Fan Club during the annual Hopalong Cassidy Festival in Cambridge, Ohio.  Laura Bates is president of the fan club, which was formed back in 1991 and publishes quarterly a newsletter, “Hoppy Talk”, which is distributed to members of Friends of Hoppy. Membership was around 500 in the beginning, but has dropped to about 300 members today as younger adults have little memory of those great cowboy heroes. “Hoppy Talk” is celebrating its 24th year of publication in 2013.

William Boyd and Hopalong Cassidy are synonymous…Hopalong Cassidy, his alter ego. When he finally retired, he turned over his entire crew and cast to a new Western just coming on the scene…Gunsmoke. Boyd didn’t sing, dance, play sports, or race cars, he was simply Hopalong Cassidy.  He smiled, waved and shook hands.  He was everybody’s Mr. Good Guy and his favorite drink was a nonalcoholic sarsaparilla!

The Hopalong Cassidy Museum is located in the South Tenth Street Antique Mall in downtown Cambridge. There is easy access as Cambridge is at the intersection of I-70 and I-77. Wheeling Avenue is their main street and the museum is just a half block south of Wheeling Avenue on 10th Street.