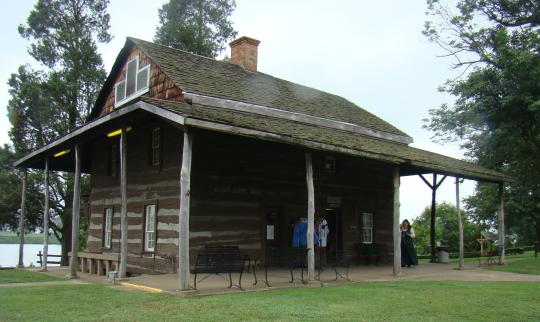 A promise of “I will build you a mansion” resulted in the construction of this Mansion House at Point Pleasant, WV at the site of the first battle of the Revolutionary War. Back in1796,  Walter Newman built this log-hewn house – the first in the Kanawha Valley – so his wife would have a beautiful Mansion House when she arrived in Virginia.

While he waited for the arrival of his wife, the house was used as a tavern and also had rooms for weary travelers.  The cost for a room per night was fifty cents, which most considered highway robbery.

As you enter through the back door of the house, the gift shop and information center are right inside the door. There are helpful people inside to tell you information regarding the house and the people who used to live there. 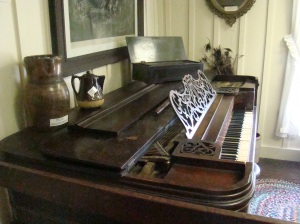 Don’t let the appearance of the house fool you. Inside there are more floors and rooms than you might imagine. Four levels in all are present in this old house: basement, first floor, second floor, and attic. The side of the house where the gift shop is located was the original tavern.   As you go up a few stairs and down a few more, you arrive at the side where the family lived. This has been restored to its original nature with colonial and early American furnishings. Included in the parlor is a square baby grand piano, which was one of the cherished treasures early Americans brought over the Alleghenies. It seems likely that Walter Newman thought this was a necessity for his wife’s mansion. 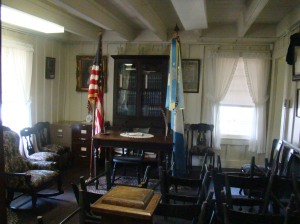 Their former sitting room is today the place where the regular meetings of the Colonel Charles Lewis Chapter of the Daughters of the American Revolution are held. Colonel Charles Lewis and his brother,General Andrew Lewis, were both heroes of that long ago battle of Point Pleasant. In 1901 a branch of the Daughters of the American Revolution restored the house to its original style with the assistance of the citizens of Point Pleasant. Their goal was to preserve the way of life that was prevalent in the 1790’s on the Ohio and Grand Kanawha Rivers.  Today this Old Mansion is listed in the National Register of Historic Places. 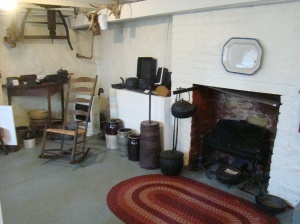 Basement kitchen at The Mansion House

Heading to the basement, you discover the kitchen! In high-status families, food was often prepared in the lowly kitchen, often located in the basement of the house. The fireplace for the kitchen located at this low level, most likely kept the rest of the house warm during the winter. A handmade braided rug rests in front of the fireplace with kitchen pans and tools hung nearby. The wooden rocking chair was placed near enough to gather warmth from the fire, and would have been used by visitors or the man of the house, as the women didn’t have much time to sit and rock. Then the food would be carried up to the first floor to be served in a more dignified room. 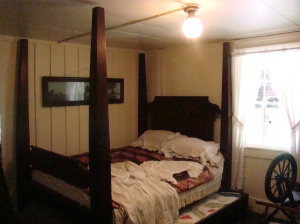 On the second floor were several bedrooms, probably those earlier used as the rooms rented to travelers, and later used by the family.  Here were small rooms for the children as well as a beautiful four poster bed, which is over 150 years old. An old-fashioned spinning wheel is displayed near the window.

Still going upward on even narrower steps now, you arrive at the attic where there is a large display of Indian artifacts, books and clothes from that era, plus other interesting objects. It is definitely worth the climb!

Today the Mansion House remains along the Ohio River as part of the Tu-Endie-Wei State Park. Daughters of the American Revolution are frequently on hand in colonial dress to give informative tours.

While in Point Pleasant, don’t forget to visit some of the area’s other interesting places. This is the place of the famous Silver Bridge Collapse in 1967. You will find a monument marking the spot of the original bridge as you walk the artistic Riverwalk with floodwalls painted with scenes of Point Pleasant history. Don’t forget to visit the Mothman statue and the Mothman Museum to learn more of the unusual and unexplained happenings in this town years ago.  You might even get a hug from the Mothman himself.

The Mansion House is located at Tu-Endie-Wie State Park in Point Pleasant, WV at the end of Main Street where the Ohio and Kanawha Rivers meet. The Mansion House Museum is opened May through October. Hours are Mon-Sat. 10:00-4:30, and Sun. 1:00-4:30. There is no cost, but donations are accepted.