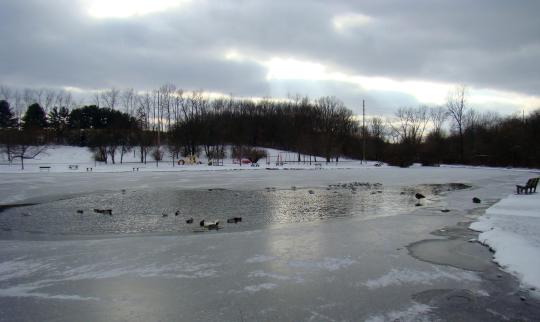 Jackson Park near Byesville is a great place to walk on a winter day.

Snow flakes fall against the window panes while the wind howls through the cracks in the wall. Looking out the window here in Ohio, there is snow as far as the eye can see. This is the perfect time to get out the picture album and reminisce about other snowy days. 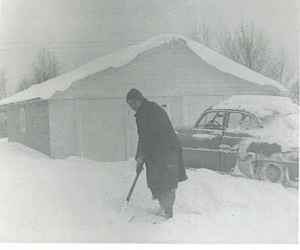 Dad bundles up to shovel snow.

Shoveling snow has always been a winter chore throughout the years. Often this task got delegated to the man of the house as he bundled up in buckled boots, old overcoat, and toboggan to protect himself against the winter cold. At the time of this picture, the car wasn’t driven into the garage because the tires had chains on them to enable better traction in the snow. Sometimes it may have been days before anyone cleared the roads. It may be a neighbor with a blade on his tractor or perhaps the highway department, that finally opened the roads for needed supplies. Often when the snowplows cleared the roads, they would push a pile of snow a couple feet high across the end of your driveway. Or you may have lived in a place where the winds blew drifts several feet high. Those were and still are the times that try men’s souls and their backs.

Children always enjoy a ride on their sled whether they are being pulled by someone or gliding down a hill. Many neighborhoods have a favorite hill where children gather to race on their sleds. Sometimes they may use a large lid or piece of cardboard with the front bent up so it can slide easily down the hills without getting caught in the snow. An old innertube also provides a great way to slide down a hill. You can be certain that everyone is going to come home covered with snow and ready for some hot chocolate.

Another favorite activity in the wintertime is building a snowman. Parents enjoy helping youngsters build that first snowman as it makes dad and mom feel young again too. To add the finishing touches, a nose is created by using a carrot, while its mouth and two eyes are made out of coal. Many times a hat is placed on the snowman’s head with a scarf around their neck. Then everyone hopes it doesn’t melt away too quickly after all that hard work. 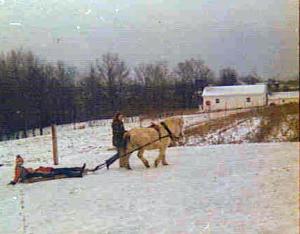 Pepper, the Pony, pulls a sleigh over the snow.

If you are lucky enough to have a horse of your own, or a kind neighbor with a horse, hooking up a sled or sleigh behind a horse is great fun. It is important that someone either lead the horse or ride it as otherwise the horse might take off too quickly leaving passengers on the ground in the snow. What a treat when it works properly!

Deer wander over the Ohio hills, as seen from my kitchen window.

This is also the time to see animals seemingly enjoying the snow as well. Kittens leap over snow covered chairs and playfully wrestle on the ground, while dogs might just sit and watch the activites around them. Deer graze on a few blades of grass still poking through the snow, while keeping alert to any danger around.

While this is not a favorite season for all, many truly enjoy taking a walk in the snow, skiing, or ice skating on a frozen farm pond. Winter recollections can be an enjoyable way to pass a homebound day. Wonder what your favorite wintertime activities might be? To tell the truth, this gypsy would rather take a road trip on a sunshiny day!