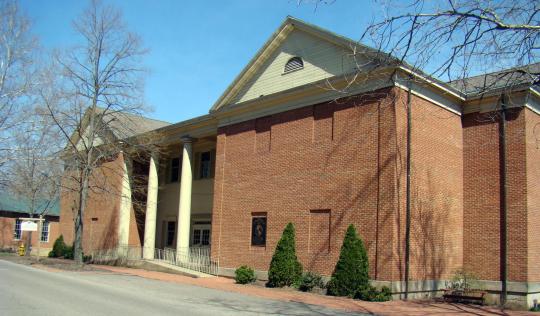 Sometimes when visiting a place time after time, you miss a treasure right in its midst. Such was the case with Coshocton’s Roscoe Village, a favorite spot for festivals over the years. However, there at its edge, a beautiful brick structure, The Johnson-Humrickhouse Museum, overflows with unusual historic exhibits.

This actually had its start back in the mid-1800’s when two brothers, John and David Johnson, spent their childhood in Coshocton. In later years, these brothers traveled the world collecting artifacts from all the places they visited. 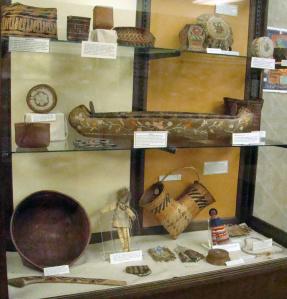 In 1931, the Johnson brothers gave 15,000 collected objects to their hometown with the stipulation that a museum would be established to honor their parents, Joseph Johnson and Mary Susan Humrickhouse. Thus, the Johnson-Humrickhouse Museum became a reality and has since added collections of other local residents. Displays frequently change because the museum has more artifacts than can be displayed at one time.

Two floors contain four main areas to explore: Native American, Ohio History, Coshocton Area Memorabilia, and The Asian Room. Each holds objects that are certain to lead you to recall memories of the past and even create a puzzle or two in your mind.

American Indian artifacts display natives’ skills at pottery, beadwork and basket weaving. These outstanding collections show not only local Native American handiwork but that of Indians throughout the United States. A large collection of kachina dolls, who hold a spiritual essence to the Indian tribes, and items used by the medicine men are a couple of the noteworthy displays. 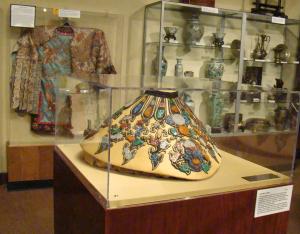 An Asian Room contains both Japanese and Chinese treasures. A Japanese warrior in full dress protects that section of the room, while Buddha statues and kimonas express the Chinese traditions. A beautiful jeweled collar worn by a member of the Imperial Court contains over a hundred embellishments.

The Newark Holy Stones present a controversial subject as these objects were found in 1860 while excavating a mound in Newark, Ohio. The largest stone, the Decalogue Stone, appears to have Hebrew writing around its edges. Many link it to the Hopewell Indian culture, which existed there between 100 BC and 500 AD, while others are skeptical as to its origin.

Much of the Historic Ohio Display has been donated by great-grandchildren of Nicholas Miller and Mary Darling, early Ohio pioneers. Nicholas came to the Coshocton area in 1802 with $36 and two axes. That first winter, Nicholas made his home in a cave with his dog. Then in 1806, the Darling family migrated to Ohio from Viriginia. 18 year-old Mary drove her family’s four-horse team pulling a covered wagon containing eleven brothers and sisters to settle in the Coshocton area.

Nicolas’ trade as surveyor provided him opportunity to purchase prime land with money that he earned. Therefore, when he married Mary Darling, they settled in the Coshocton area. Today a replica of the cave he slept in provides children a place to hide and pretend. Beside it, a cabin has been reconstructed similar to the one where Nicholas and Mary lived to raise their family.

As you can tell, there are displays here for various interests, and at a low admission price. Throughout the year, various speakers and workshops provide a variety of subjects for area residents. Visit this treasure filled museum that isn’t far from home. While you are there, step back in time and stroll the brick streets of historic Roscoe Village.