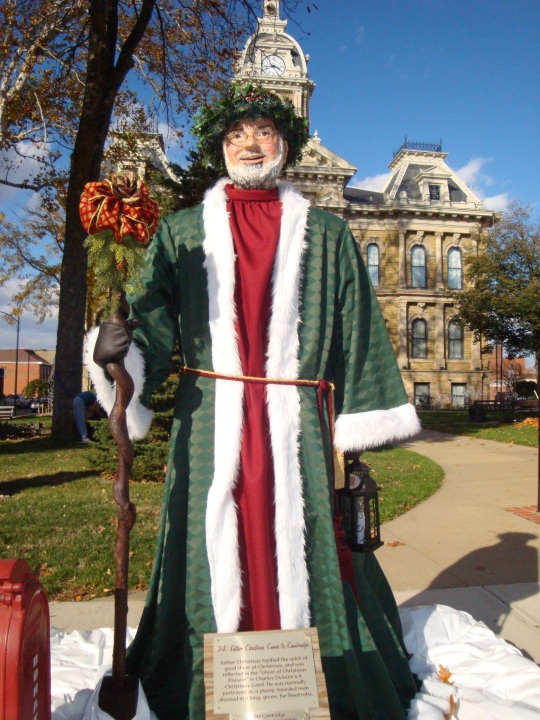 Dickens characters again line Wheeling Avenue as the 10th Anniversary of Dickens Victorian Village gets underway. Opening ceremonies will be held at the Guernsey County Courthouse on November 2 at 6:00. Father Christmas hopes to see you there!

Opening ceremonies for the 10th Anniversary of Dickens Victorian Village will be held at the Guernsey County Courthouse in Cambridge on November 2 at 6:00 pm. Welcoming remarks will be given by Dickens founder, Bob Ley; Cambridge Mayor, Tom Orr; and Guernsey County Commissioner, Dave Wilson.
Queen Victoria will make her first appearance for the season on this evening, as she cuts the ribbon to open the festivities. Many exciting activities are being planned for the year, which runs from November 2, 2015 – January 2, 2016.
Alan Day will entertain with bagpipe music. This old England tradition began when Queen Victoria and her husband, Prince Albert visited the Highlands. The Queen enjoyed the music so much that when she returned home, a personal Piper to the Sovereign was named so she could listen to the bagpipes daily.
Holiday music will also be provided by Brook Singers and Chordial Chorus, both well known groups in this area. Their vocal renditions add a lively tone to the festivities.
After the Opening Night Ceremony, Grant Hafley, owner of AVC Communications, will introduce the debut of the 2015 Guernsey County Holiday Light Show. This spectacular light show was Hafley’s brainchild from its inception, and Father Christmas looks remarkably like Hafley to honor his generosity.
This computer synchronized program uses over 55,000 lights moving in time to holiday music. Included are three large Christmas trees and 60 animated displays. There’s something here for the child in everyone.
Come out and join the celebration as another year of Dickens Victorian Village is about to begin.