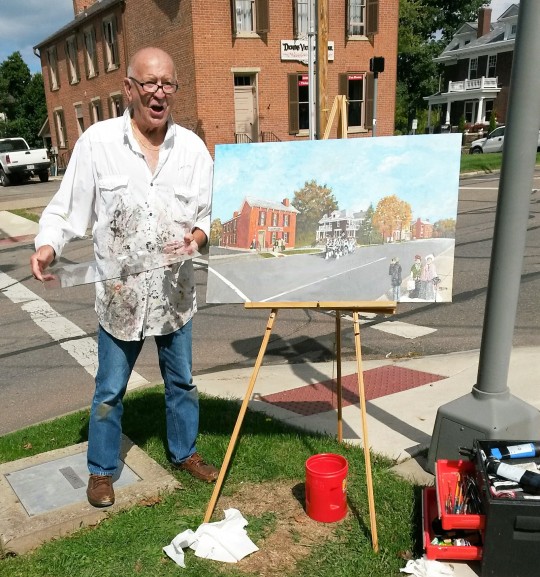 Bob can often be found on the street corners painting one of his beautiful pictures. Here he captures the spirit of DIckens Victorian Village at their Welcome Center.

If you walk down the streets of Cambridge, Ohio on a warm day, you’re likely to see an artist standing on a corner painting precise pictures of area architecture. Bob Jennings enjoys capturing the landscapes, but even more he enjoys talking to the people, who stop to watch him move his brush to magically capture the buildings to perfection.

Inspiration for a new picture might happen at an unusual moment. Part of what he paints is what he really sees, and part is imagination. 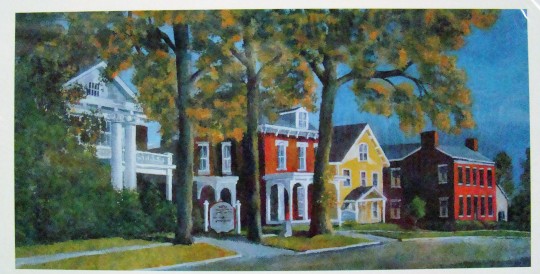 Most people from Cambridge will recognize this group of historic houses along Steubenville Avenue.

The world of art isn’t new to Bob, as he has been drawing pictures since childhood. He frequently entered the art contests in the Cleveland Plain Dealer. Even as a fourth grader at Garfield School, he entertained others with his drawing. At that time the playground was gravel, so Bob took his shoe and drew a perfect outline of a horse to the astonishment of those watching.

Throughout life, Bob couldn’t resist drawing pictures, and took a few art classes now and then. When he was working at Champion, other employees remember his talent as he would draw pictures on his breaks. It seems that Bob’s flair for illustrating just couldn’t help but show itself wherever he happened to be. 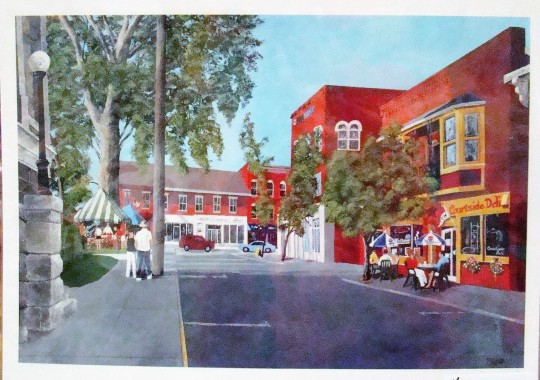 Here Bob captured the scene along W. 8th Street beside the courthouse. His architectural ability shines forth in his paintings.

Thomas Jefferson has always been his hero. Jefferson’s ability to create fine American architecture started that connection. But Bob also considered Jefferson to be very intelligent, as he had a wide variety of interests, and seemed to be able to do just about anything.

Architecture became a real passion for Bob and he began designing kitchens. This led to more extensive plans for beautiful homes, additions to homes, and even churches. His intense enthusiasm as a self-made architect led to his precision in drawing, as Bob had to have everything perfect – right down to a small fraction of an inch. 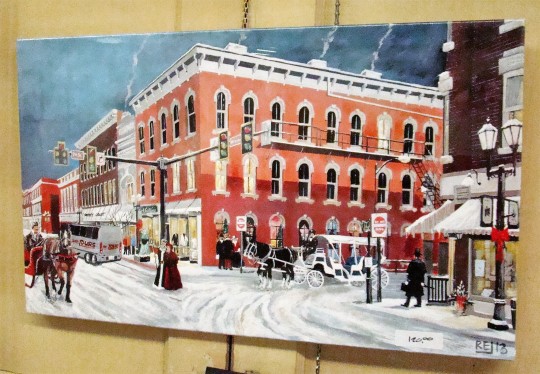 This winter scene displays the many ways people enjoy Dickens Victorian Village as they come by bus or car, and often take a horse and carriage ride.

After retirement, his real art work began. In his studio at home and on the streets of the town where he lives, Bob’s pictures look as real as a photograph. But they have that extra quality of giving the building a personality. 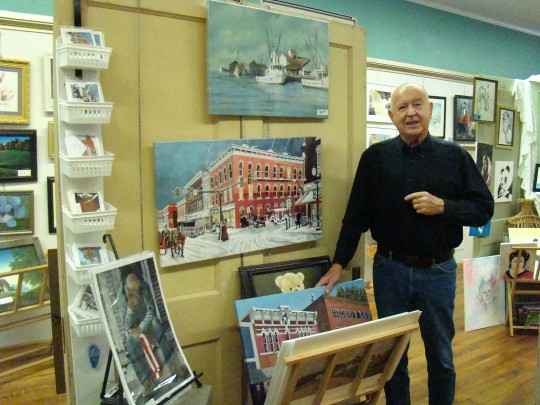 Bob is always ready to talk about his passion for painting at the Art Market.

Today, Bob can frequently be found at the Art Market in downtown Cambridge. You can see his love for people as everyone who enters the door receives a sincere greeting from Bob, and he falls into a natural conversation with them. He usually tells them, in his humble way, “I’m not the brightest star in the sky”, but when it comes to his art work, he shines more than he wishes to acknowledge. 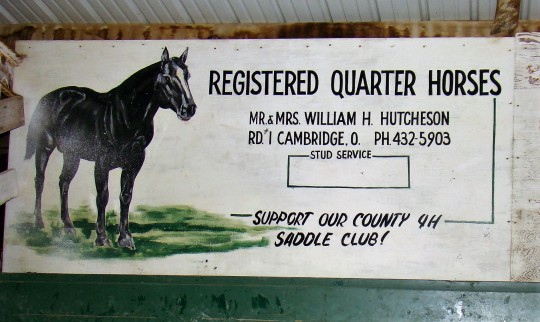 This sign was painted by the artist years ago at the Guernsey County Fair.

After seeing all these beautiful paintings of buildings, it was surprising to learn that Bob’s favorite thing to draw is horses. Yes, horses! Years ago he painted a quarter horse on a sign in the 4-H barn at the Guernsey County Fairgrounds, and that painting can still be found there today. At his home, his wall is covered with a large painting of horses. 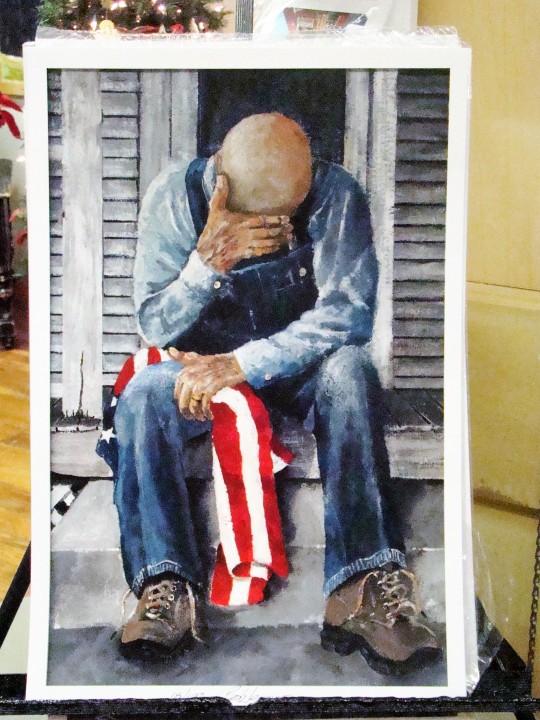 What does this painting mean to you?

When asked if there was something special he would enjoy doing, Bob answered that he would like to get away from the precise drawings and do more “loose” paintings. Portraits came to mind as he recently painted a portrait of a man sitting on his porch with the American flag draped over his leg. Many interpretations have been made regarding this painting.

Recently, Bob saw a little boy that inspired him. Artists seem to have that innate ability to recall in detail what they have seen. He remembers exactly what that little boy looked like and what he wore. Why, he can describe him down to the creases in his pants. 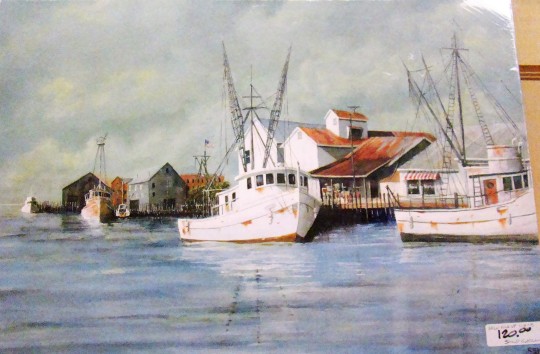 Once in a while Bob heads out of state for some art time.

When asked what advice he would give a young person, who enjoys drawing, Bob was quick to answer. “Pursue it. Even though they might never be a great artist, they would still appreciate art.”

For Bob, he feels his painting ability to be a God-given gift. He believes, “We all have our talents. No one is greater than anyone else.”

It doesn’t seem likely that we have seen the last of this humble Bob Jennings’ creations.