Time for Chestnuts Roasting on an Open Fire

For two months each year, the spirit of Charles Dickens thrives in the city of Cambridge. One of the favorite delicacies of Dickens’ Victorian England was chestnuts. At a party in his famous novel, “A Christmas Carol”, he wrote,”the chestnuts and the jug went round and round.” So perhaps Charles Dickens would have enjoyed visiting a chestnut farm just north of here in Carrollton.

Back in the time of Charles Dickens, cones filled with hot roasted chestnuts were sold on street corners in merry old England. Not only did this provide a tasty treat, but holding the cone kept the hands warm as the aroma of roasted chestnuts filled the street. 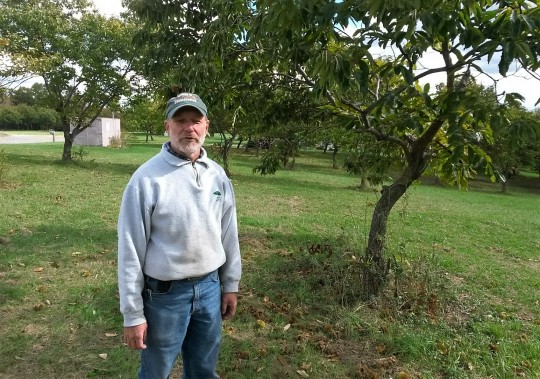 Greg Miller enjoys telling everyone about his chestnut orchard.

Here in Ohio, Greg Miller’s father began a hobby of growing chestnuts and various nut trees back in the 70s after a blight destroyed nearly all the American chestnuts back in the early 1900s. When Greg returned home from college, they noticed that the Chinese chestnuts were the most productive. Thus began the Empire Chestnut Co.

On their farm on Empire Road near Carrollton, chestnuts are planted in their nursery to start new trees. Only the very best chestnuts are used for this purpose. These new seedlings are then transplanted to a nearby field until they are mature enough to sell.

Headquarters for Route 9 Cooperative sports five chestnuts, indicating the five families that participate in the cooperative.

They encouraged others to plant them too and in 2010, with four other growers, formed Route 9 Cooperative, headquarters for the only commercially grown chestnuts in Ohio.

This is no small operation. From 90 acres of chestnut trees, over 60,000 pounds of chestnuts are harvested annually. Chestnut trees thrive in sandy loam soil. Greg said, “They grow best on a mountain or hillside where the soil is so poor you can’t raise your voice on it.” 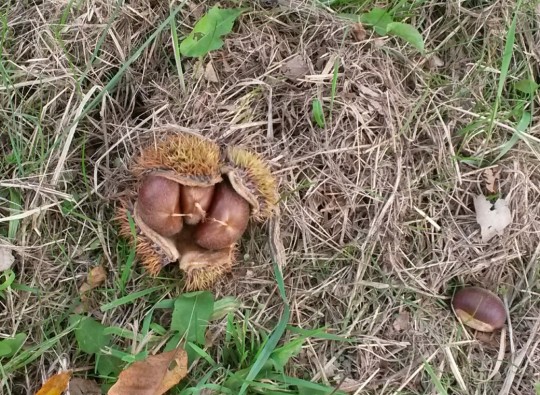 Chestnuts fall to the ground in a prickly burr, which is soft inside.

For those familiar with chestnuts, harvesting can be difficult and even painful. When the prickly burr falls from the tree, it normally pops open revealing three or four chestnuts inside. However, the inside of the chestnut hull feels as smooth as velvet. thereby cradling the nuts.

Imagine picking a bucket of about 1,000 chestnuts – one by one from the ground.

Even with today’s modern technology, chestnuts are still picked by hand. Greg places an ad in the paper looking for workers and usually has 100-200 people picking each year. They range from individuals to Amish families and community youth groups. His ad carries a bit of humor:

If you don’t mind bending down to pick up a penny,

This Drum Sizer cleans and sizes the chestnuts.

It takes over 1,000 chestnuts to fill a five gallon bucket so picking requires a lot of patience. Once the buckets are filled, the chestnuts are cleaned and sorted by size before their plastic perforated bin gets placed in the “nut jacuzzi”. As a precaution, to eliminate the possibility of any insects or eggs surviving, they are kept in a temperature of 119 degrees for about four hours. 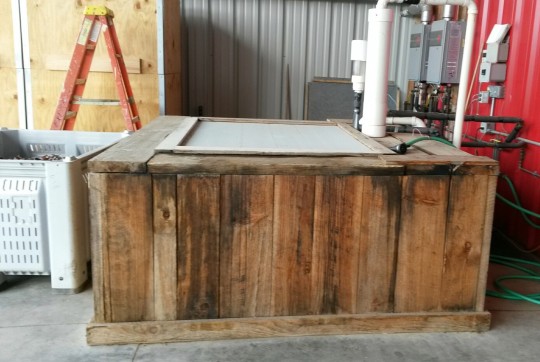 The plastic bin filled with nuts gets dipped into the “Nut Jacuzzi” to kill any possible insects or eggs.

From here they are hand sorted to eliminate any imperfect chesnuts, then dried in their bin, but kept moist to avoid mold. They are then placed in a refrigerated room before bagging. 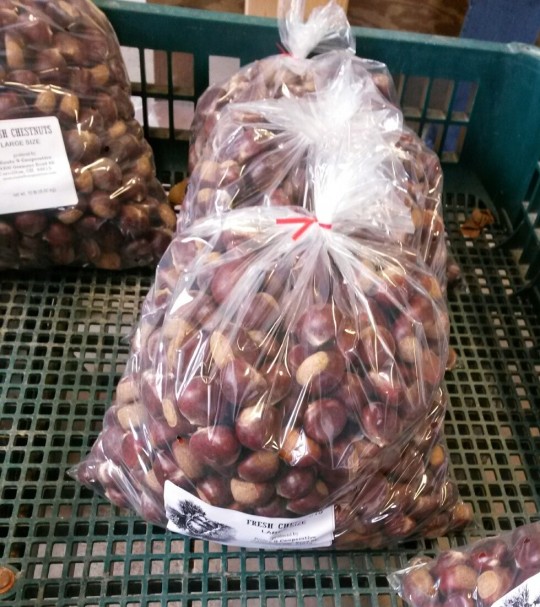 Finally, the chestnuts are bagged for shipping all over the United States.

Most of their orders come from the internet and are sent all over the United States. Many of these customers being ethnic groups that have always enjoyed chestnuts as part of their culture. Some places even use them in chestnut beer and whiskey.

The Millers favorite way to eat chestnuts is “raw”. They feel they can easily tell the difference in quality by eating them this way. His daughter, Amy, also enjoys them ground into flour for pancakes. A delicious treat! One gourmet goat cheese producer orders chestnut leaves to wrap the cheese for flavor as it ages.

Orders for 50,000 pounds of chestnuts before the season began show the need for more chestnut tree growers. Chestnut trees are a long term investment as it takes about seven years to get your first chestnuts, while their peak will be reached in fifteen to twenty years. But at $3 -5 a pound wholesale, it may be worth the wait.

If Dickens’ Cratchit family lived here, they would be certain to place an order to make stewed chestnuts for Thanksgiving dinner. Perhaps at payment of $11 a bucket, they would even help pick them.

Route 9 Co-operative is located near Carrollton on Route 9 south of town. Visit their website at http://www.empirechestnuts.com for more information

Down the Ohio River with Charles Dickens

Comments on: "Time for Chestnuts Roasting on an Open Fire" (2)