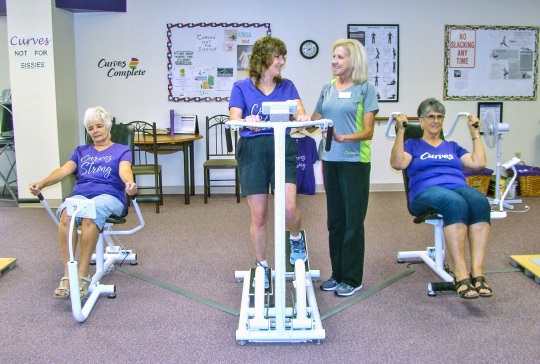 Reggie Gerko, Betty Duche and Lois George exercise under the supervision of Janet Reed, the Face of Cambridge Curves for 14 years.

That motivational sign greets ladies when they enter Curves of Cambridge. This Curves is just one of many that are celebrating the 25th Anniversary of Curves International this year. Gary and Diane Heavin opened the first Curves in Harlingen, Texas in August of 1992. Their first franchise came two years later in Paris, Texas and today there are over six thousand Curves’ franchises in the United States and nine other countries.

Locally, Curves began fourteen years ago on September 29th with Janet Reed being the face of Curves all those years. She has a passion for exercise as feels it not only makes you feel better physically, but also reduces stress, which our world produces in abundance.

Curves 30-minute Circuit, designed especially for women, works every major muscle group with strength training, cardio and stretching. Ladies tell you they enjoy their visits because they want to get healthier, reduce blood pressure and cholesterol readings, increase balance, and make new friends. They love how they feel after exercising!

Hours are flexible so you can come whenever it fits your schedule. Silver Sneakers are accepted at no personal charge, so there’s no excuse not to exercise. If you can walk, you can exercise at Curves. You’ll find people there from grade school into their 80s.

Come in for their Open House on September 29th to celebrate the 25th Anniversary. While it’s their birthday, you can have the gift of a free membership fee if you mention this article.

Getting stronger makes your daily routine a whole lot easier. Like the clock on Curves’ wall says, “It’s time to amaze yourself.”

Buzz On In for Reynolds Honey