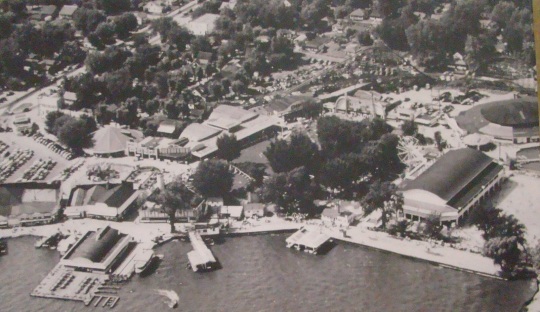 This is an overview of Buckeye Lake Amusement Park as it appeared in the 1950s.

Trips to Buckeye Lake Amusement Park can be remembered by many adults today. As children, they would head there with their parents or neighbors for a full day of rides along the lake. Almost everyone took along a picnic lunch.

Today the Amusement Park is gone but the memories still remain at the Buckeye Lake Museum in Buckeye Lake. The museum opened its doors in 1998 and is located about a mile west of the original entrance to the amusement park.

Construction of the Ohio & Erie Canal gave a reason for Buckeye Lake to be created in 1826. This original swamp land had been left behind by a retreating glacier thousands of years ago. Buffalo Swamp was dug and dammed to create a source of water for the canal.

The Crystal Swimming Pool was a gathering place for the entire family.

When the canal became inactive after the railroads gave a better and faster means of transportation, the state developed Buckeye Lake as a popular resort. With over 3800 acres of water, 35 miles of shoreline and twenty islands, people began flocking to the area. Twenty-one hotels sprang up along the shoreline.

Cars came bumper to bumper through this entrance gate to the park.

The Dips Roller Coaster, which went over the lake, could be seen from the beach.

After a few years, the lake seemed like a great place to add an Amusement Park. In 1931, “The Dips” Roller Coaster was built. This was a huge attraction as the roller coaster took passengers out over the lake. The roller coaster lasted until 1958 when a serious accident injured several passengers. It never ran again. 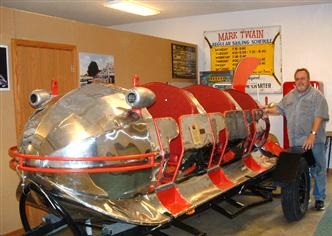 This was the popular Rocket ride.

Rides like The Whip, Big Slide, Dodge ’em Cars, Octopus, Wild Mouse and Rocket brought crowds to the lake. Folks enjoyed the taste of their Caramel Corn and Salt Water Taffy, which were shipped all over the country.

Rides were part of the attraction for a visit to the amusement park.

No wonder it was known as The Playground of Ohio with often 50,000 people in a single day. You could hardly get through the crowds, but still, people patiently waited bumper to bumper and shoulder to shoulder.

A popular skee ball game can still be played at the Buckeye Lake Museum.

Many companies held their annual picnics at Buckeye Lake Amusement Park. Guernsey County residents will recall RCA having picnics at the lake. Admission to the park was free during most of its operation, and later $2 a car. Every Thursday was Family Day when the cost of each ride was five cents for children and eight cents for adults.

This was the machine that made their famous salt water taffy.

Their Crystal Ballroom brought quality entertainment to the area. The “Buckeye Lake Waltz” was a popular dance tune. Louie Armstrong, Bob Hope, Sammy Kaye, Guy Lombardo, and Glenn Miller were among the names who appeared at their ballrooms. This was a happening place!

Big bands also performed at Skateland, which had a 50,000 sq.ft. round floor. It was not unusual to have 2000 skaters there in an evening.

A skeleton of a mastodon was found nearby. A cast of its head can be found at the museum.

The park finally closed in 1970 after an attempt to revive it as a Country Western Theme Park.

Just four miles down the road, when they were digging to build a golf course, they found the large skeleton of a  mastodon, called the Burning Tree Mastodon, that is the most complete skeleton ever found. It’s estimated to be nearly 12,000 years old. A cast of the head can be found at the museum. 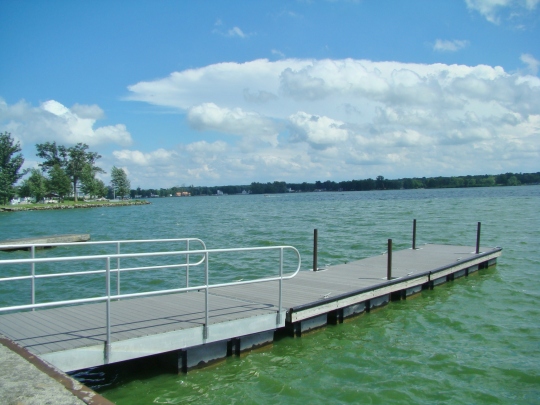 Today, Buckeye Lake is still a great place for a boat ride, walk or picnic.

Rides on the lake aboard a sternwheeler were popular even after the amusement park closed. But due to problems with the dam, the water level was not deep enough for the sternwheeler to operate. 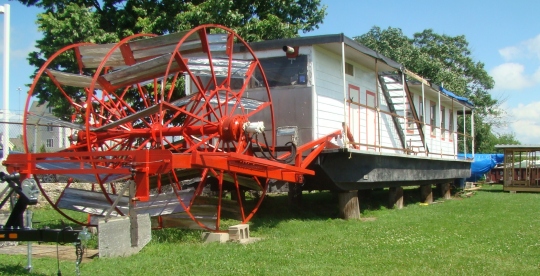 Queen of the Lake III sternwheeler is being refurbished for cruises on Buckeye Lake.

In 2015, a new Queen of the Lake III was donated to the museum by Dr. Ronald and Cindy Downing of Zanesville. This sternwheeler can operate in less than two feet of water so the low level of the water in the lake will not affect it. Right now they are working on refurbishing The Queen of the Lake III into a dinner boat to help raise funds for the museum. Their dream is to have it on the water by late summer.

This covered fountain in the construction zone is the only piece of the original amusement park that remains.

The only piece of the amusement park that remains is the fountain, which still stands in the original park’s location at Alexander’s Landing. Perhaps you’ll want to visit there and let your mind wander back to those days of fun and excitement at the Buckeye Lake Amusement Park. You can still take a picnic with you!

Buckeye Lake Museum is located off I-70 at Exit 129. Take OH 79 South aout two and a half miles to 4729 Walnut Road. The museum will be on the left hand side of the road.