The bugle sounds as Commander Jim Gibson leads the Honor Guard standing at attention across from the courthouse. They are honoring the veterans of all wars as they give a three-gun rifle salute and Jim plays “Taps”.

Jim has been watching parades in downtown Cambridge since he was six years old when he went to a Veterans Day Parade with his dad, a Navy veteran. In fifth grade, he began playing the trumpet, an instrument always used during the parade ceremonies. The Navy and trumpet together have played a large role in Jim’s present-day life. 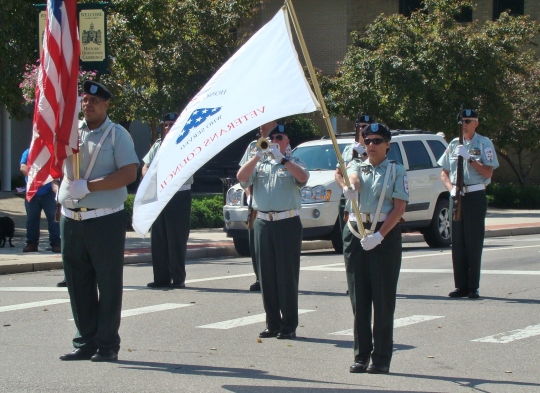 Jim’s bugle sounds “Taps” in honor of all Veterans.

When the National Anthem would play while Jim watched as a youngster, the veterans would all stand and render a salute or place their hand over their heart. Some had tears in their eyes. They all had the same look even though they were different ages and different branches of the service, but Jim didn’t understand why.

Brought up in a family interested in history, their vacations were to historic spots with stops for fun along the way. They visited places like Gettysburg, Washington D.C. and Williamsburg. Jim developed a love for his country and when he was a senior turned down an opportunity to attend Ohio State to join the Navy. He felt he had to enlist.

A veteran of the United States Navy, Jim served in Vietnam. After electronics training as an Aviation Ordnanceman, Jim served two years with VA42 at Oceana Naval Air Station and then was transferred to VA196 at Whidbey Island, Washington. 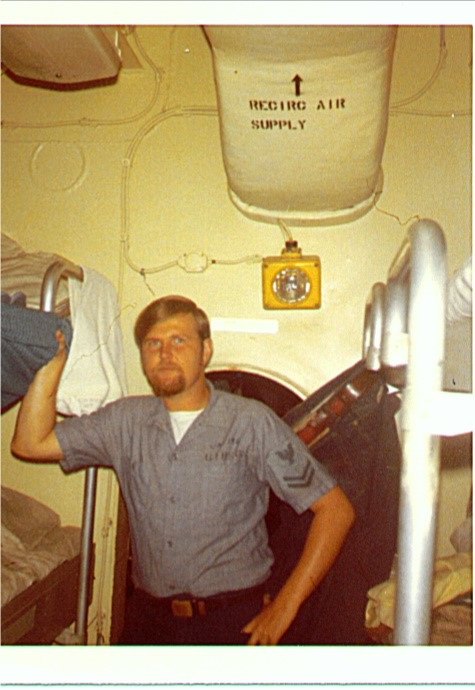 USS Enterprise served as Jim’s home for several months in 1971.

The squadron deployed aboard the Enterprise and sailed to Vietnam. One of the assignments was to prevent the enemy from bringing in needed supplies to South Viet Nam. This was not an easy task as they worked eighteen hours a day loading 500# bombs and other ordnance by hand. One plane could carry 28 bombs, and the squadron launched four aircraft every one and one-half hours.

Jim wouldn’t change any part of his life. His experiences have led him to do the things he does today. His time now appears to be spent in three different directions: veterans, church, and music.

Through his leadership, two ceremonies occur at home football games in Cambridge. Before the game, there’s always a special flag raising. After the game, a Retreat Ceremony features the senior band members with a trumpet playing “Retreat”. Schools all around take notice of this memorable addition to the game ceremony.

The honor guard stood at attention during the Memorial Day service at Cambridge Courthouse.

A special part of his life, now that he is retired from GTE/Verizon, comes through providing Funeral Honors for departed veterans. This began in December 2002, when he was asked to play “Taps” for a military funeral. The day was one of sleet and freezing rain, and Jim began to wonder what he had gotten himself into.

Then he looked at the veterans of all ages in attendance. They stood at attention with ice forming on their sleeves and rifles, but still had that special look in their eyes. Jim knew then, this was something he wanted to participate in. Now he goes to approximately 100 military funerals a year all over the area.

Christ United Methodist Church plays an important part in his life. There he serves as trustee, teaches an adult Sunday School class, and plays trumpet in their Praise Band. He also conducts a worship service twice a month at Cardinal Place.

Everyone in the community recognizes Jim’s musical talent. Under his direction since 1996, the Cambridge High School Alumni Jazz Band performs annually at the Salt Fork Festival and many other venues.

While Jim and his wife, Trudy, have played in many area bands and orchestras, their favorite right now is the Muskingum Valley Symphonic Winds.

The Navy has become a family tradition as Jim’s son and daughter-in-law are currently serving, and his two step-sons have served in the Navy. Their grandfathers were also Navy veterans. What a grand tradition!

This veteran’s advice would be, “Find enjoyment in what you are doing. Cherish every experience.” He encourages young people to enjoy music, something they can enjoy the rest of their life.

By serving in the Navy, now Jim understands that special look in the eyes of the veterans. “It’s a look of pride and a look of love; pride in knowing that by serving they’ve made a difference, and a look of love for their Country and their fellow man.”

Please remember to honor the veterans you know for their service to our country to protect our freedoms. Thanks to all of our servicemen.