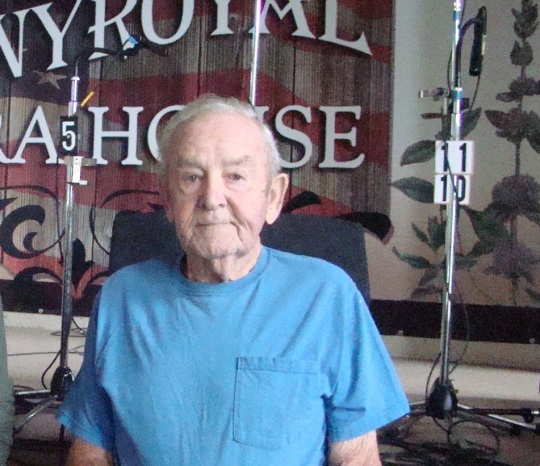 Those who have lived in Fairview for a long time, have great memories to share that perhaps some have forgotten. Kenny Keylor had been around for 91 years. He shared some stories and pictures with me during a recent visit. 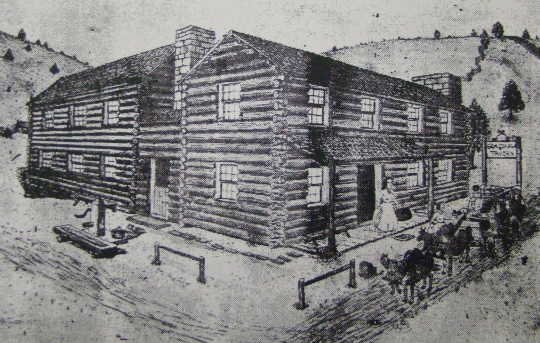 Bradshaw Tavern and Inn along the old Zane’s Trace had famous visitors such as Henry Clay.

A group from Maryland led by Ralph Cowgill and Hugh Gilliland stayed at the Bradshaw Inn as they walked the old Wheeling Road. When they stopped along the way some climbed a hill and are said to comment, “My, what a fair view.” The name stuck! 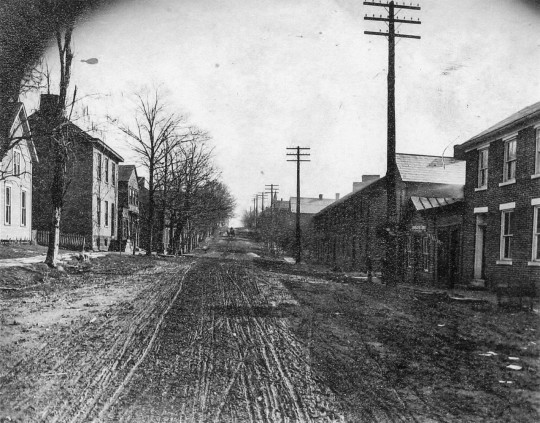 This is a view of Fairview’s Main Street back in the 1800s.

The town was laid out by Hugh Gilliland in 1814 on the border of Guernsey and Belmont counties. He platted thirty lots, each one-fourth of an acre and fronting on each side of the Wheeling Road. By 1866, 555 people lived there – it’s highest population. 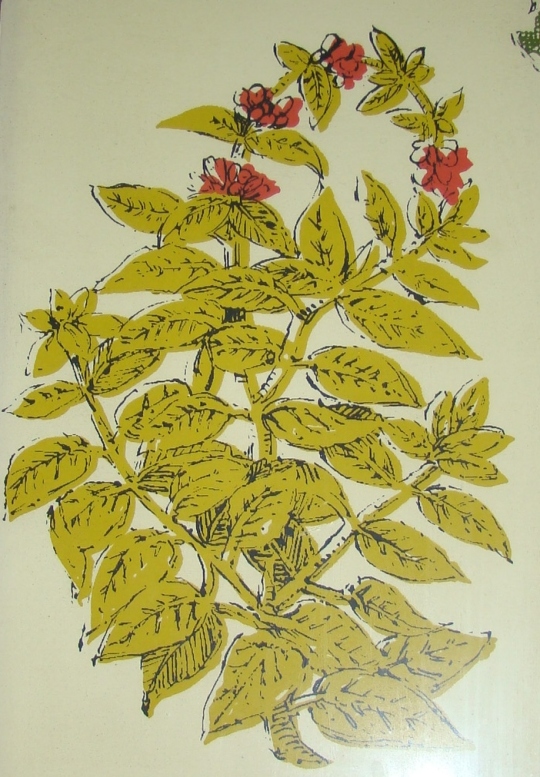 A painting of the pennyroyal pant hangs in the Opera House today.

A big attraction back in 1806 were the fields of pennyroyal that grew wild in the area. The herb received its name because it was a favorite of the English royalty who treated headaches, cold, arthritis and dizziness with this oil. Thus, the name Pennyroyaldom for the area. 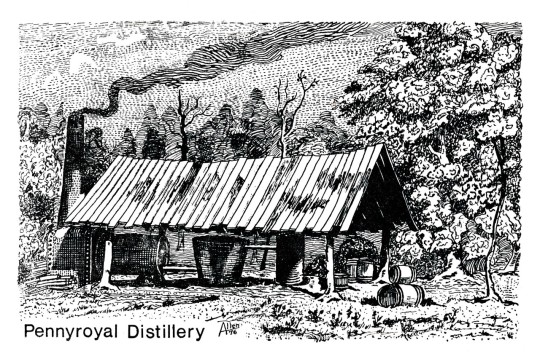 Pennyroyal Distillery, where they made the “cure-all oil”, was captured on this old postcard.

Benjamin Borton had learned how to distill the pennyroyal oil while living in New Jersey. His sons, grandsons, and great-grandsons continued in the business selling this “cure-all” oil after the family moved to Fairview. 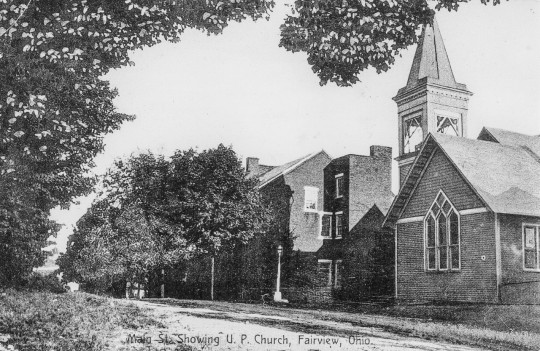 This oil, along with tobacco, both “cash crops”, were shipped by freight wagons on the Old National Road to the eastern markets. Fairview produced more Pennyroyal Oil than any other place in the nation. Its medicinal purposes were still being sold in the 1980s until the government labeled it a possible carcinogen. 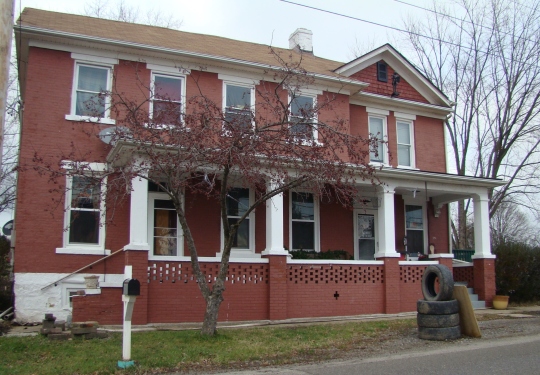 Since the town was growing, Fairview became filled with many needed businesses: general stores, grist mill, millinery store, two hotels, and three cigar factories. Over twenty different occupations found a place in town to hang their shingle: dentist, doctor, undertaker, barber, and blacksmith to name a few. As you can tell, this was a thriving little community. 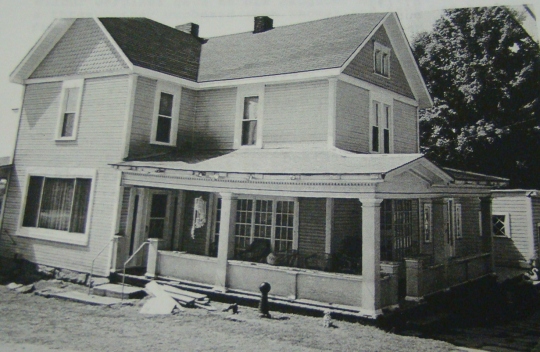 O.G. Boyd had this costume house in town and organized their Pennyroyal parade.

A medical school existed in Fairview taught by Dr. T. McPherson. If someone wanted to become a doctor, he had to serve three years in the school and then one year in Columbus. They even had two local grave robbers who supplied cadavers to the school.

A large crowd attended the Pennyroyal Reunion in 1945.

The first reunion was held in 1880 in Gardenia Grove just west of Fairview with 4500 people present. Organized by David Taylor, editor of the Guernsey Times, Sarchet’s History of Guernsey County states that Taylor was “the presiding genius and program maker of the Pennyroyal Reunion.” He gave the organization state-wide recognition as the greatest of all harvest-home picnics. 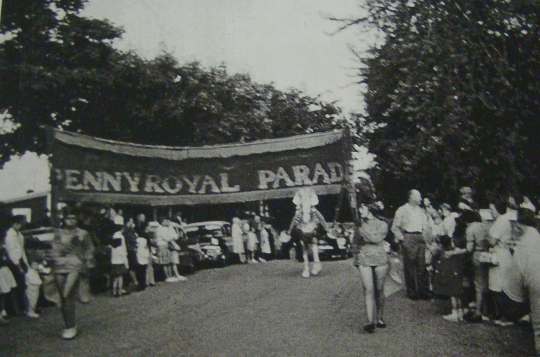 The Governor of Ohio spoke at the Pennyroyal Reunion. He stayed in Barnesville and a horse and buggy brought him to Fairview, where he gave a speech in the afternoon. Five officials, who later became Presidents of the United States, also joined in the celebrations.

Kenny Keylor has been a big supporter of his community and the reunion for all his life. He played his guitar as part of the entertainment. His collection of Pennyroyal Reunion programs has only five years missing.

In earlier years, entertainment took many forms. Minstrel shows were very popular and one year a three-act play was performed. Most recently their entertainment has been bluegrass music. But every year a chorus performed their Pennyroyal Song, Down in Ohio, with lyrics and music written by John H. Sarchet, who directed the chorus for many years. 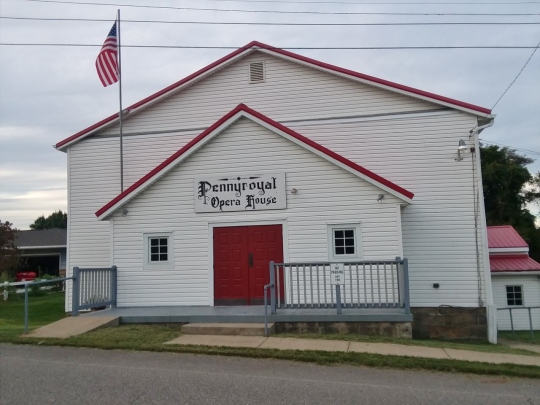 The building for today’s Pennyroyal Opera House has been around for over 150 years.

Since those early days of Pennyroyaldom, today Fairview survives as a small town with a population of between 80 and 85. But their heritage is never forgotten as seen in these words from the first Pennyroyal Reunion program in 1880:

“As each returning year revolves in time,

May all true sons of childhood’s happy home

Return from distant places, where they roam,

And keep a day in stories and in rhyme.” 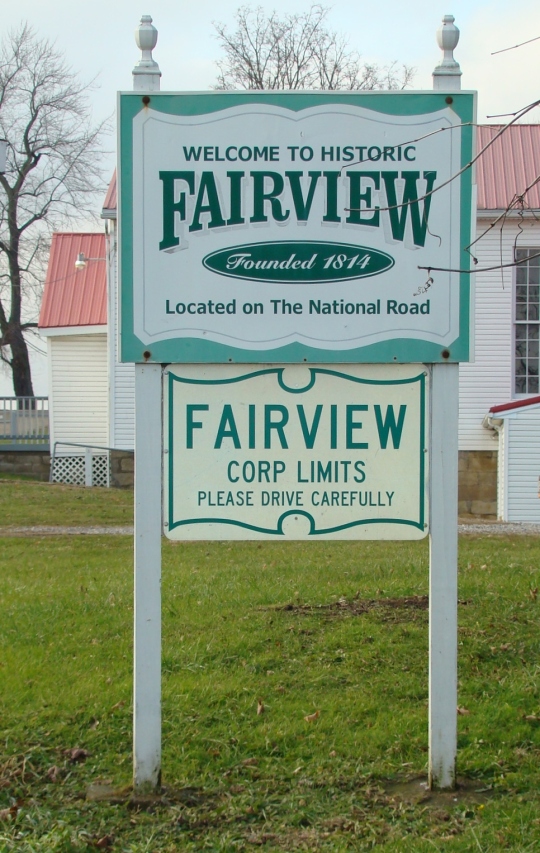 Fairview is located along I-70 today between Wheeling, WV and Cambridge, OH. Take exit 198 to the north of the interstate and turn left into the small town of Fairview. You might want to visit sometime when the Pennyroyal Opera House has some great bluegrass music.