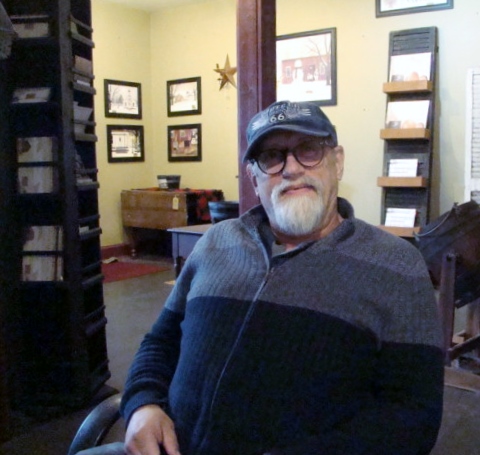 Billy relaxed in his gallery as he talked about his journey.

A country boy at heart describes Billy Jacobs, a man with a great variety of creative skills. Today he is best known for his rural scene paintings, which can be found around the world and at his studio, Billy Jacobs Gallery, in Navarre, Ohio.

Creativity has always been part of his nature. As a child, he drew pictures, worked with clay, and found outlets for his talent wherever he went. His grandmother was a big influence in his life and always encouraged him. When he went to church on Sunday morning, he usually sat with his grandmother as she had paper and pencil so he could draw. 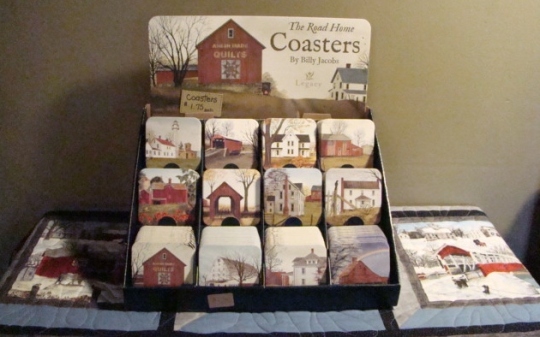 The family moved several times during Billy’s younger years. When he was in high school, they lived in Senecaville and Billy graduated from Meadowbrook High School in 1976. Upon graduation, he was awarded a scholarship to Pittsburgh Art Institute but Billy turned it down as he wasn’t interested in commercial drawings.

After graduation, he worked for several years at Fabri-Form in Byesville. But his mind was still working in a creative manner. He and some friends would take photographs around the area. This is also when Billy began writing in his mind a sci-fi novel, which is yet to be written on paper. It’s been a long journey from working in a plastics factory to having his own gallery today.

His interest in magic led him to create puppets. Being a magician sounded like an interesting occupation. As a hobby, he began creating puppets for sale. Many church groups used them for part of their worship service with the youngsters. 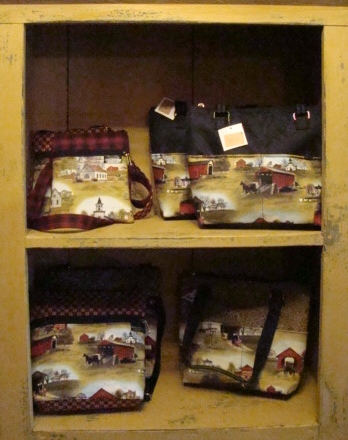 Country wood crafts held his interest and he opened a store in his home to sell some of his creations. Most, however, were sold wholesale and those connections have made him the successful artist and businessman he is today. While he has never gone to art shows or festivals, he has had success at trade shows establishing connections with businesses that sell his work.

Using wood as a medium, his country and primitive items were where he made his start before he even thought about painting. However, he always knew he was going to make a living by using his creative skills. 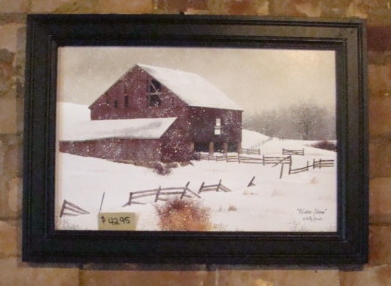 “Winter Snow” features an old barn that appealed to his artistic eye.

In the early 2000s, he shifted gears and decided to try his hand at acrylic painting. Of course, this self-taught artist would choose to paint those same country scenes that had appealed to him all his life. His fame as a country folk artist had begun. 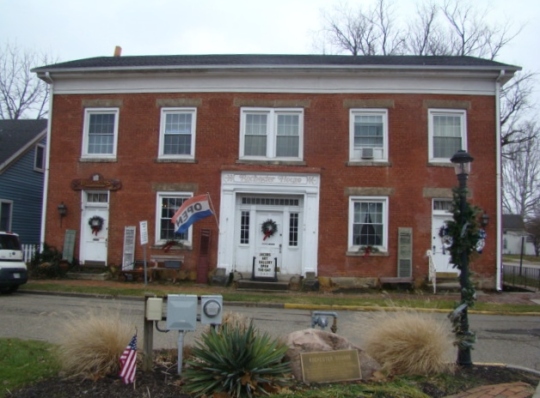 Billy Jacob’s Gallery is located in the historic Rochester House in Navarre.

The building where his studio is located was once Rochester House, an old tavern built in the 1840s. Ulysses S. Grant and William McKinley stayed there. Located near the former Ohio-Erie Canal, the tavern became part of the underground railroad. A tunnel was built from the canal to the basement of the Rochester House. The slaves were then hidden in a special room in the attic.

He lives beside the gallery in what used to be Abigail’s Tea room and that is where he paints the American scene that has become his trademark. His paintings give you a glimpse of what life was like in years gone by. He has no set schedule for painting but paints whenever he has time and is in the mood.

The first scene he painted was to honor his grandmother and mother. It was called “Home.” His first painting for sale was “Round Barn” – a folk style done in acrylics. Billy had an advantage over most artists as he had a knowledge of marketing and had already established connections around the world. 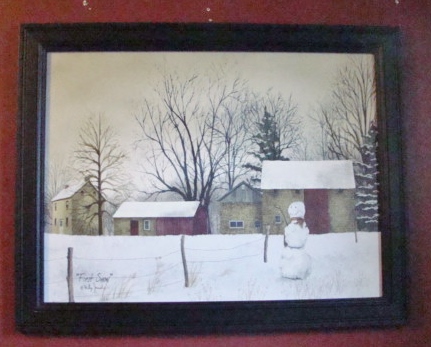 “First Snow” captures the country scene that he has made so popular.

In 2006, he switched to watercolors for a more realistic look to his paintings. He took five paintings to a family New Year’s Eve party and after dinner shared them with his family. It was the first time they had seen his watercolors. His sister exclaimed, “Billy, these are going to make you famous.” 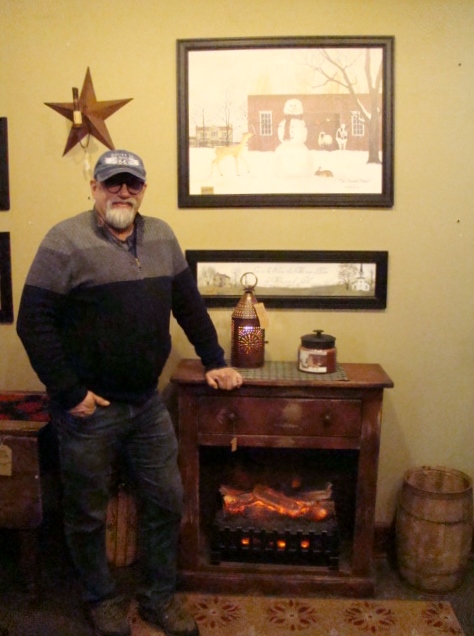 Billy enjoys talking about the inspirations behind his paintings.

He paints scenes that he recalls from his own life or an old farmhouse or barn that catches his attention. The rural American countryside has always held an attraction for him. He loves the peacefulness of it. “I got my love of nature and country from my grandmother.” He learned the name of every tree, flower, insect, and bird during walks with her in nature.

Over 300 imaginative fonts have been developed by Billy as he searched old cards and newspapers for ideas. He somehow always puts his own twist on anything he does. 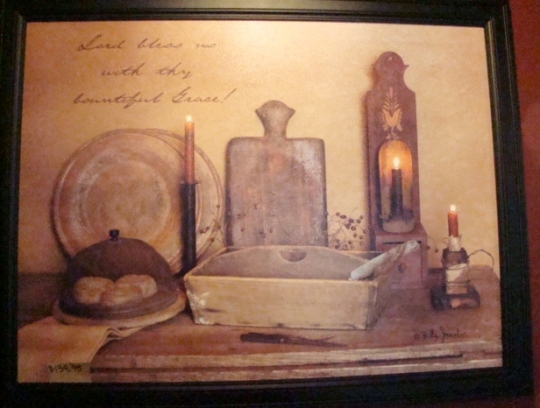 Faith is very important in his life as shown in this painting.

According to Billy, the reason for his success was, “I knew a lot about the industry and did well because it was God’s plan for me.” His paintings are a blessing to many and make a different in their lives.

The stories that he hears as a result of his paintings are a blessing to him. An example would be that of an Alzheimer patient who was unhappy with leaving home. A nurse saw a picture of Billy’s that reminded her of the home the patient described. When they hung that picture in his room, he became much kinder and happier. 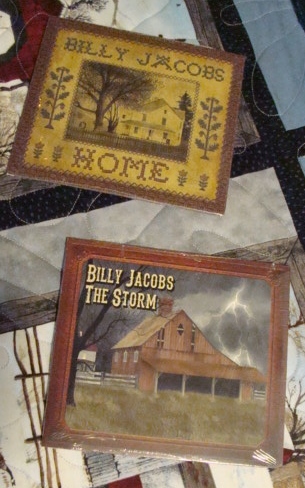 His creativity carries over into the field of music with two CDs available.

When asked what he does for fun, music became the topic. Billy also has two CDs filled with songs that he wrote the music and lyrics himself. They are bluegrass and country. If you listen closely, you will learn a lot about Billy’s life and the things that have made an impression on him.

His music takes him to Aspen, Colorado each year to the John Denver Week. There he jams with other musicians and performs at a couple shows himself. 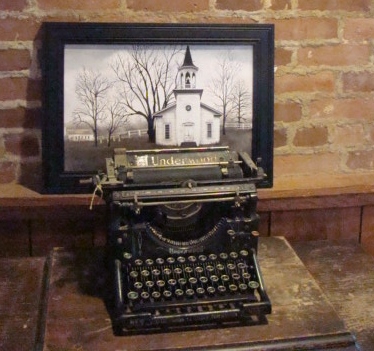 This old Underwood typewriter is just a sample of the antiques displayed around the gallery.

Billy Jacobs Art Gallery in Navarre, Ohio has a large selection of his paintings for sale. They also feature primitive and country items. Learn more about his work on his website at http://www.billyjacobs.com.

Billy has accomplished many creative tasks and said, “I haven’t made a movie just yet, but it’s still on my mind.” Don’t forget he also has an idea for a novel. This man is creative in so many ways and his natural entrepreneurial skills help pave the road to success.