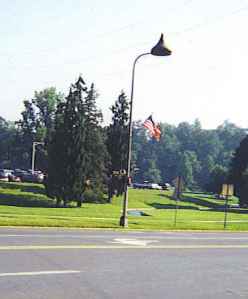 The smell of chocolate drifting through the breeze is one of the fond memories of Hershey, Pennsylvania. There’s no doubt about being in the popular chocolate town, because the shapes of Hershey kisses serve as street lights down Chocolate Avenue. Naming the town Hershey was one of the best advertising schemes a candy company could devise.

Upon arrival at Hershey Chocolate World, take the Great American Chocolate Tour Ride.  Seated in moving cars, the tour follows the trail of the cocoa beans from their original home in the tropical rain forest. Then upon their arrival at Hershey, they are transformed into that delectable chocolate that we have enjoyed throughout our lives. All five senses are treated as visitors see the displays, hear the stories, and smell the chocolate as they travel to the Sweetest Place on Earth. Finally tourists get a taste of Hershey’s, as they give everyone a free piece of candy at the end of the tour. Of course, chocolate always makes you feel good. 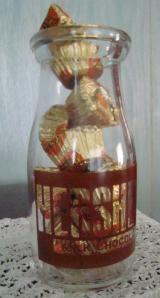 Their gift shop is filled with chocolate in every form and combination. The walls are covered with everything from apparel to household items with popular candy bar logos. Nearby shelves hold all the chocolate products including the Hershey Kisses and Hershey Bars, which have been around for over a hundred years.  My Christmas tree now has a Hershey Kiss ornament, while a Hershey milk bottle holds candy treats on my coffee table.  Sweet memories!

It’s just a short walk to the Hershey Story, a museum telling the history of the Hershey family.  Milton S Hershey, the man who revolutionized the way to make milk chocolate back in 1894, left his fortune to the Milton Hershey School’s orphan boys. Since Milton and his wife had no children of their own, they developed a real concern for less fortunate children and founded the school in 1909.  His legacy is an inspiration to many, as his life was a rags to riches story.

Here visitors also learn of Hershey’s inspiration for creating the town of Hershey. Seems it was patterned after another chocolate maker, Cadbury in England, who also built their factory in what was considered a workers’ paradise. Wanting his employees to be as content as the cows who gave the milk for the chocolate, Milton included an amusement park, community center for family activities, and low cost housing for his employees.  Today some of these same items are enjoyed by tourists. 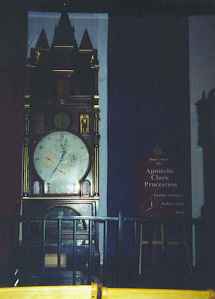 A popular spot in the museum was the Apostolic Clock, which tells more than the time, as it tells phases of the moon, zodiac signs, months, dates and days of the week. Its main attraction, however, is telling the story of the betrayal of Christ.  The Twelve Apostles and Christ appear at a quarter to each hour and begin telling the story of the betrayal. Every fifteen minutes Father Time strikes a bell and the center figure changes.  It is quite an amazing performance to watch.

Built by John Fenner in 1878, the clock was taken on a tour of Pennsylvania where ten cents was charged to view its story. This  clock was purchased by Milton Hershey back in 1936 when he placed it in the museum for the enjoyment of the local community. During past visits, the clock performed on an hourly basis, but today it is limited to a special calendar, so you need to check ahead to see when performances are scheduled. Having been built in the 1880’s, it is understandable that the clock would now be in delicate condition. 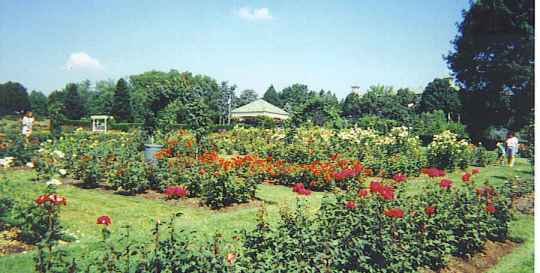 What started out as a Rose Garden has expanded over the years to a twenty-three acre botanical bonanza. Every day is a beautiful day for a walk in the gardens and their Butterfly House is a favorite of youngsters especially. Lucky there are benches along the way, as most people want to sit for a while and take in the quiet and majesty that surrounds the gardens. 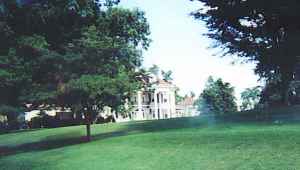 High Point, Hershey family’s home, was given in 1930 to Hershey Country Club as their clubhouse, with Milton retaining room for his private office. In 1977 it was renovated again to be used as Hershey Company headquarters through the efforts of WIlliam Dearden.  Being a student of the Milton Hershey School, William became CEO of Hershey Foods and had a passion for the beautiful old home, and wanted to save it from destruction.

No visit would be complete without checking out the source of the tantalizing chocolate smell that permeates this town. The smokestacks of the old Hershey Chocolate Company, a chocolate brown brick building, can be easily spotted as its lawn has hedges cut into the words HERSHEY COCOA. There’s no doubt that you’re in the right place!

But times change and the Hershey Company has moved its plant this last year to the outskirts of town.  Haven’t been back to see the new plant, but the modern equipment couldn’t be accommodated into the old plant with its low ceiling and columns throughout.  Some say Milton would be upset with the changes, while others feel he was a businessman who understood that things must change.

Even though times change, chocolate bars are still a favorite for many. Imagine reading this Hershey Chocolate quote the next time you bite into your favorite bar:

Put a smile on your face, make the world a better place

Leaving town down Chocolate Avenue with its Hershey kisses, memories of this chocolate world will hang around for years to come, much like the cocoa goodness has covered Hershey, Pennsylvania for over a hundred years.

Hershey, Pennsylvania is just off I-70 / I-76, part of which is a toll road. Take exit 247 to PA 283 at Elizabethtown.  Hershey is directly North of Elizabethtown as you follow Hershey Road.  The town is well marked for signs to the various attractions. Enjoy a chocolate experience!