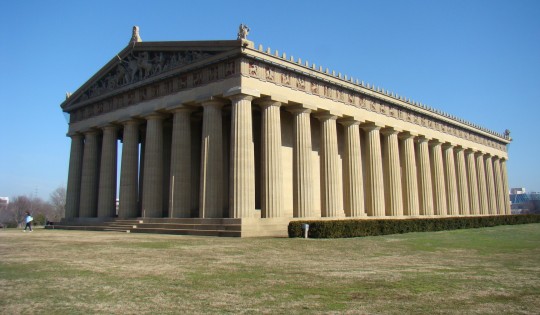 The Parthenon in Nashville, Tennessee attracts visitors from all over the world.

The Parthenon doesn’t seem to belong in Nashville, Tennessee, yet this full-scale replica was the centerpiece for Tennessee’s 1897 Centennial Exposition. For this special occasion, Nashville wanted to promote themselves as a cultural and educational “Athens of the South”. They were successful, as today there are twenty-one universities located there.

After the Centennial celebration, which nearly two million people attended, all the buildings were torn down except for the Parthenon. even though it was made of temporary materials. After the turn of the century, Centennial Park was created by the city of Nashville. By 1920, it was decided to make the Parthenon a permanent structure of aggregate concrete. 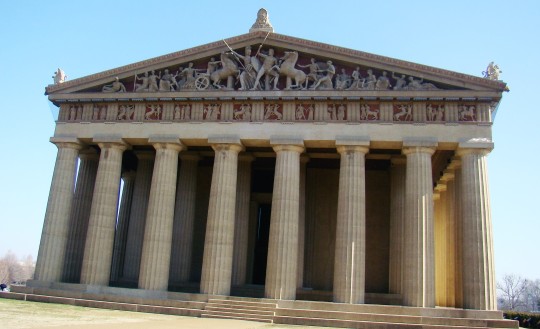 No straight lines exist in the original Parthenon or this full-scale replica.

Powerful and perfect describe it well. Built as the world’s only full-scale replica of the original Parthenon in Athens, Greece, they were careful to use no straight lines in its construction – just like the original. Even the steps are curved.

When you step inside the Parthenon, the first floor is being used as was intended. An art gallery features many local and national artists.The collection of James Cowan is permanently housed here along with special, changing  exhibits.

The appearance of Athena on the second floor is striking.

But be prepared to be stunned on the second floor. Here stands a dramatic figure of Athena, Goddess of Wisdom, Prudent War, and Useful Arts.

The addition of the statue of Athena Parthenos is rather recent. In 1990 it was decided to commission the figure while remodeling the building. The artist had everything he needed to commence work except the long pole to be part of her spear. While sitting at McDonald’s over a cup of coffee one day, he looked out the window and noticed their flagpole. It looked like it would be perfect. When he contacted McDonald’s, they agreed to provide one of their flagpoles, which is today her spear…covered in gold.

Athena’s shield has figures of Amazon women surrounding the head of Medusa.

This Goddess of Righteousness measures 42′ tall and is covered in gold…eight and a half pounds of gold leaf. She is protecting the snake, representing the people of Athens, with her shield, which has Amazon women on the outside of it and the head of Medusa at the center. At the time of the original statue, Athena was at peace as the shield is down, the flaps on her helmet are up, and the spear rests on her shoulder.

Athena holds Nike. Note that her wrists have bracelets of snakes.

In her right hand, she holds the 6’4″ figure of Nike, Goddess of Victory. Nike’s wing shape is today used for the symbol of speed and flight for Nike shoes.

Along the bottom of the statue is a golden wall of drawings depicting life in those times. The artist included faces of several family members in the drawing: his father, mother, wife, best friend, and himself. 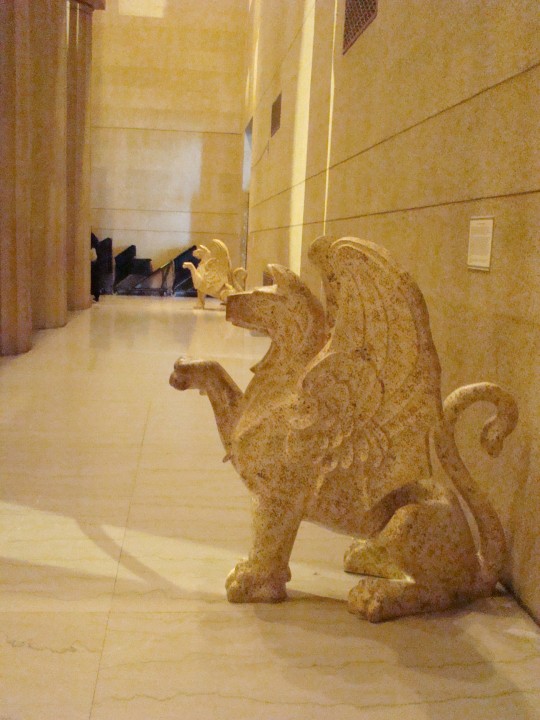 On each side of the statue stand Gryphons for protection. With the head and wings of an eagle and the body and tail of a lion, these strange creatures were called the hounds of Zeus. They can also be found at the four corners of the Parthenon’s roof.

At each end of the upper chamber, bronze doors cover the opening to outside. While the original doors in the Athens Parthenon are believed to have been wooden, decorated in bronze, these solid bronze doors each weight 7.5 tons, measure 6.5 feet wide and 24 feet high, and are twelve inches in thickness. Yet even a child can open or shut them on their intricately designed ball-bearing collars.

Each piece has notation, in English and Braille, of where it appears on the pediment.

In the outer chamber of the temple, plaster replicas have been made from direct casts of the original sculptures adorning the pediments of the Athens’ Parthenon.The originals can be found today in the British Museum in London.  Of course, all the figures were not available, so knowledge of Greek sculpture helped create the missing pieces.

The advanced scientific knowledge of 500 BC surprisingly had great understanding of astronomy. The opening to the temple was built facing east. At that time there was a reflecting pool in front of the statue. When the sun came in that east door, it hit the reflecting pool to light up the golden statue of Athena. No modern day lighting system could compare.

The beauty of the past lives on in Centennial Park today.

Centennial Park is located in Nashville, TN just west of I-40 at 2500 West End Ave. Admission to the Parthenon is very reasonable.