Buzz On In for Reynolds Honey

George and Marcia Reynolds have worked well together for fifty-five years.

Buzzing bees sound like music to the ears of George and Marcia Reynolds. Since 1972, they’ve had hives of bees and their reason for starting this venture had nothing to do with pollination or honey. 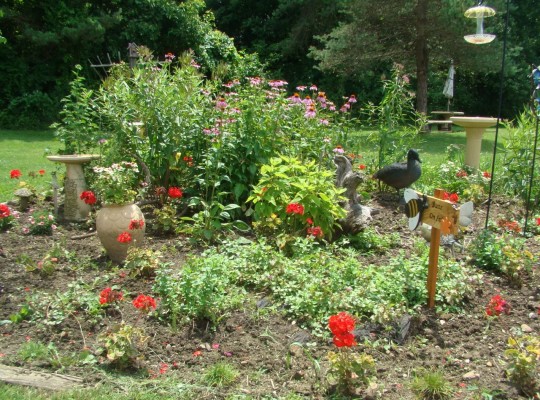 No surprise that you are greeted at their home by a bed of flower blossoms for the bees.

George suffered with arthritis after a childhood bout with polio. Doctors told him he would be in a wheelchair by the age of forty. However, George heard about a bee sting therapy they were experimenting with in Canada, that might cure arthritis. He bought his first hive to see if it would work.

Obviously, it did, because forty-five years later, George has no signs of arthritis and is quite active as he cares for forty hives of bees. Not all are at his farm as he often places one or two colonies at friends’ houses as a favor to the landowner.

Even he admits he blundered through that first colony and suffered some painful bee stings. A fellow beekeeper told him that bees shouldn’t be that nasty. What he needed was a new queen. It worked. With the new queen, the colony became much gentler.

George wears a long sleeved white shirt and veiled hat while working with the bees.

Most of the equipment he uses is economically homemade. After he puts on a long sleeve white shirt, he covers his head with a veiled hat. His smoker confuses the bees so he can more easily use a special tool to open the hive. In order to get close to the bees, George even provided a veil for me to wear. No stings received. 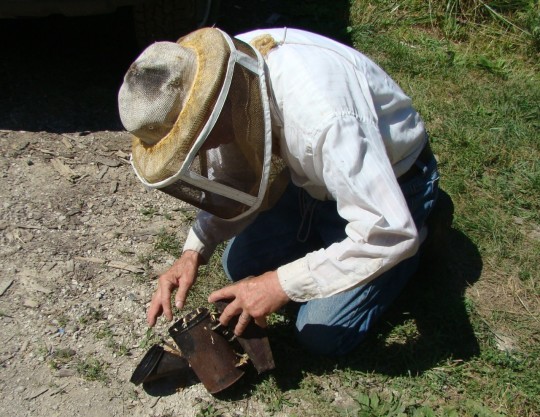 A smoker is used to remove scents and confuse the bees.

The story of honey production centers around the queen bee, who does nothing but lay eggs…500 to 2000 a day! She’s even able to decide which kind of egg she will lay – drone or worker bee.

There are about forty bee hives scattered around their farm.

The worker bees gather pollen from a variety of blossoms to bring back to the hive to feed the queen, and store for their winter food. Then the housekeeper bee packs it into the cells. To remove most of the water from the nectar, they fan it with the rapid movement of their wings.

Bees were transferred board by board to their new hive.

Many bees keep busy in the hive storing honey for winter.

Beekeepers only take a small portion of their food for us to enjoy, so the bees have plenty of food left for winter. 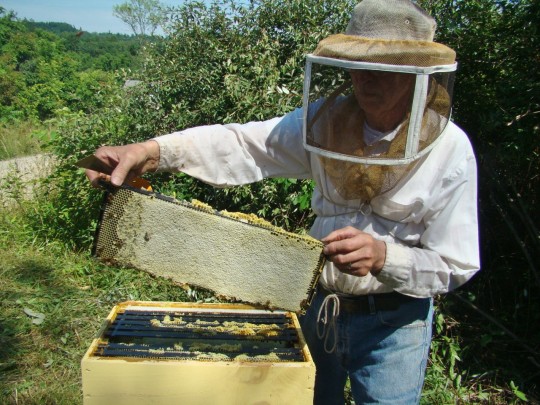 This board has been covered in honey, which George will soon process and put in bottles.

After George scrapes the honey off a frame, he breaks it into pieces by centrifugal force using an extractor. It flows to the bottom of the extractor and pours from the spigot through a strainer to get out the larger particles. He never touches the honey himself and it is never heated as that would remove helpful qualities.

If you use honey for medicinal purposes, local honey created from local blossoms is your best bet. It can even be used to reduce scars after surgery. George doesn’t spray his bees or vegetation so Reynolds Honey is chemical free.

They frequently sell their honey at the local Farmers Market.

His wife, Marcia, isn’t eager to work closely with the bees. She helps with bottling and labeling after the honey is harvested.

George remarked, “I learn something new each year.” That’s remarkable since he’s been working with bees a long time. When customers comment on how great his honey tastes, he tells them, “I have nothing to do with that. Every batch tastes different. It all depends on what blossoms the bees find.”

If you would like to be a beekeeper, talk to someone who has been doing it for years. It’s scary at first so you need someone to encourage you. The local Guernsey/Noble Beekeepers Association would be the perfect place to begin. 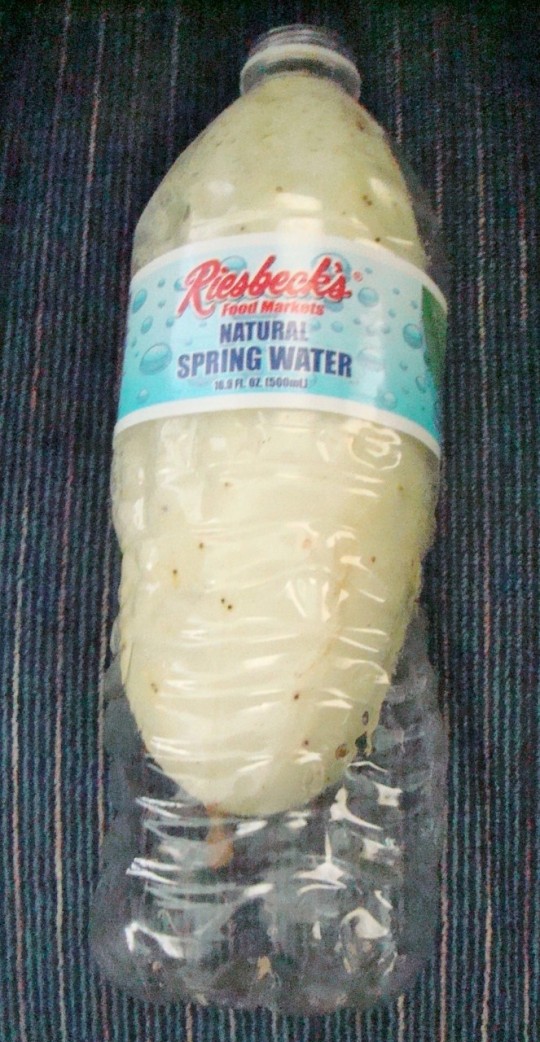 Fun in his garden resulted in this cucumber grown inside a water bottle.

In their spare time, George and Marcia have a large garden and two 30X56 greenhouses. Heirloom varieties create some unusual plants for the garden. This year he’s experimenting with sesame. The seeds came from plants at Thomas Jefferson’s Monticello. A White Heron cucumber also thrives in his garden. He shared with me a cucumber grown in a water bottle.

George also carves wooden horses and has made each child in the family a small barn for their carved horses. Marcia relaxes with crocheting and adult coloring books.

It’s easy to see the Reynolds are busy as bees all year long.

If you would like some of the Reynolds Honey, visit George and Marcia during the summer months at Farmers Markets in Cambridge and New Concord. Other times, call George at 740-872-3865.