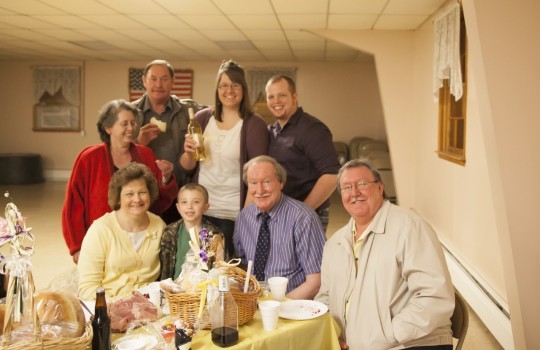 The Veselenak family continues the Easter tradition followed by their grandparents and great-grandparents at St. Michael’s Orthodox Church in Robins in the early 1900s.

Traditions often bring families closer together. An old Czech tradition being carried on at the Christ the Saviour Orthodox Church in Byesville involves an Easter Basket. This year, the Orthodox Easter falls on April 8.

When the blessing of Easter Baskets likely began back in the 1700s, people faced stark times without meats or fats in their diets for the 40 days of Lent. Being able to return these items to the table was a big part of the Easter celebration.

Most Orthodox celebrate Lent as a time to do without meat and cheese or something that they especially like. They want to make a sacrifice that is meaningful.

Christ the Saviour Orthodox Church in Byesville is filled with light during the Easter service.

On Holy Saturday evening before Easter Sunday, they gather at the Byesville church to create a service of resurrection. The darkened church becomes filled with light after circling the church three times to indicate the three days Jesus stayed in the tomb. 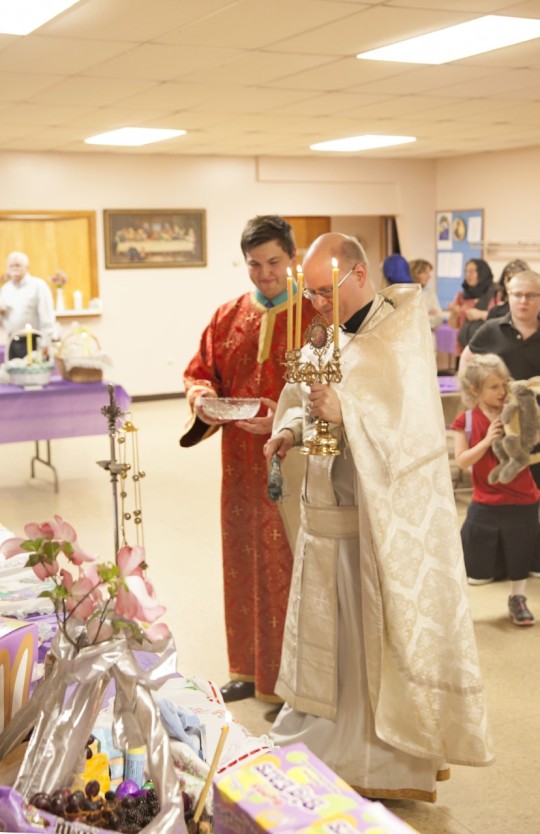 After this service, early on Sunday morning, the priest then blesses all the Easter baskets that have been brought to the church hall. Then there is a bountiful feast, as they once again enjoy the taste of meat, cheese, and their favorite food that they haven’t had during the weeks of Lent.

These beautifully filled baskets contain everything expected and even more.

Each item in the large Easter basket holds special meaning:

Other items they might add are chocolates and desserts.

Bread has various designs on the top with this using the symbol of the cross.

The Pascha Easter bread is a sweet, rich bread filled with eggs. milk and butter…the foods that were not eaten during Lent. The bread is often braided to represent Christ’s crown of thorns.

Every basket is certain to contain intricately decorated Easter eggs.

A red egg plays an important role in the Orthodox Easter. Legend says that when Mary Magdalene told the emperor about the empty tomb, she held an egg as a symbol of it. The emperor said the empty tomb was just about as likely as the egg in her hand turning red. The egg did turn red and has ever since been part of the Easter tradition.

A traditional embroidered cover is placed over the basket.

Some of the men make smoked kielbasa for this special Easter Basket, while the women might prepare cirak, a special Slovak Easter Cheese. This homemade cheese is very mild and often served sliced with baked ham and beet horseradish. A great sandwich treat!

Traditions like this Easter Basket bring families together as they create and share the contents, while celebrating the meaning of this Holy Easter Season. Their church bulletin states: “May God reward your good deeds and preserve the spirit of devotion to Him every day of the year.”

Photos were provided by Nicole Veselenak Caslow. She is the daughter of Rick and Chris Veselenak. I’m proud to say the pictured, dedicated men – Mike, Rick and Gary – are my cousins. Our grandparents, George and Mary Veselenak (Dede and Baba to us) attended the St. Michael’s Orthodox Church in Robins in the early 1900s.