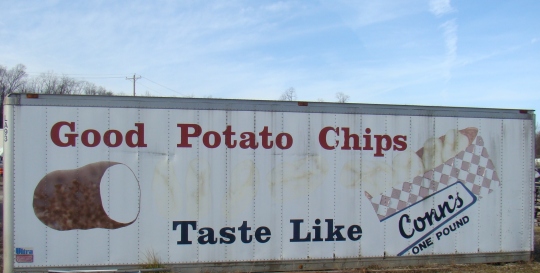 Conn’s transport their chips to warehouses in Newark and Columbus.

Everyone has a favorite food. Mine just happens to be potato chips. A road trip to Conn’s Potato Chip Company in Zanesville brightened my day since Conn’s has always been my favorite chip.

Back in 1935, Mrs. Ida Conn perfected the potato chip. She used the best potatoes, pure vegetable shortening and salt to create this taste treat which has delighted customers for over 80 years. 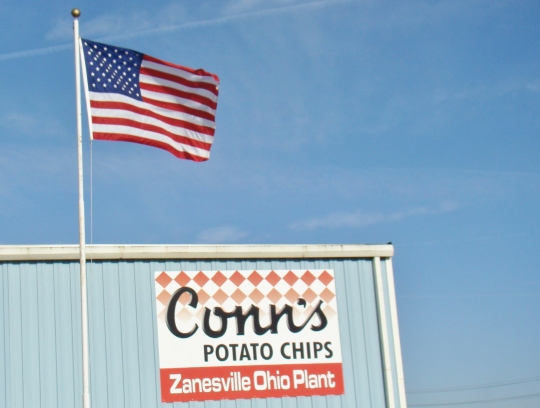 The U.S. flag proudly flies at the entrance of Conn’s Potato Chip Company.

Those first potato chips were made in her garage and delivered in a market basket to neighbors by Ida herself. While selling her chips on Putnam Avenue, Ida became acquainted with Dick Downey, who with Dave McGee, purchased the Conn Potato Chip Company from Ida in the 1940s.

Dick became a favorite customer of mine in a local downtown business about twenty years ago. Of course, he knew my love for potato chips and one day asked what my favorites might be.

Sometimes there are those special chips with a bubble in them. Those are my favorites.

A few days later, Dick brought an entire bag of potato chips with bubbles for my enjoyment. What a kind gentleman. 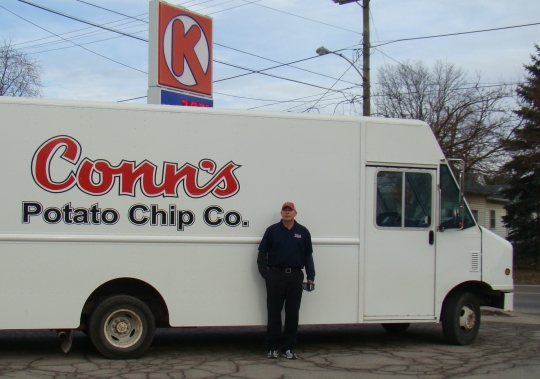 Mike has been delivering Conn’s locally for ten years.

But Dick was very strict about the way his employees handled bags of chips. He realized that few like crumbled potato chips so he told them to handle a bag of potato chips like you were holding a baby. After all, they were his babies. 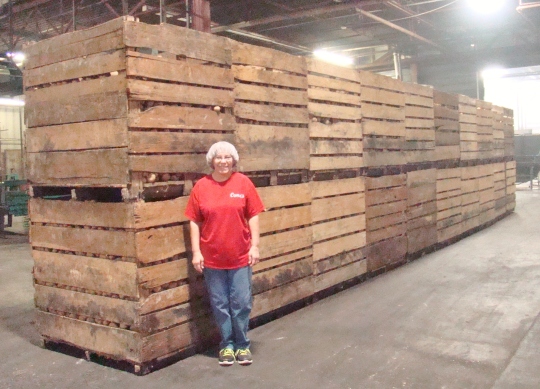 Tammy, our guide, stands before crates of potatoes that will all be used in one day.

When visiting the plant, the first thing you’ll notice is that gentle aroma of potato chips. Tammy, our guide, said her daughter told her, “Mom, you smell like a french fry.” The fragrance hangs in the air. 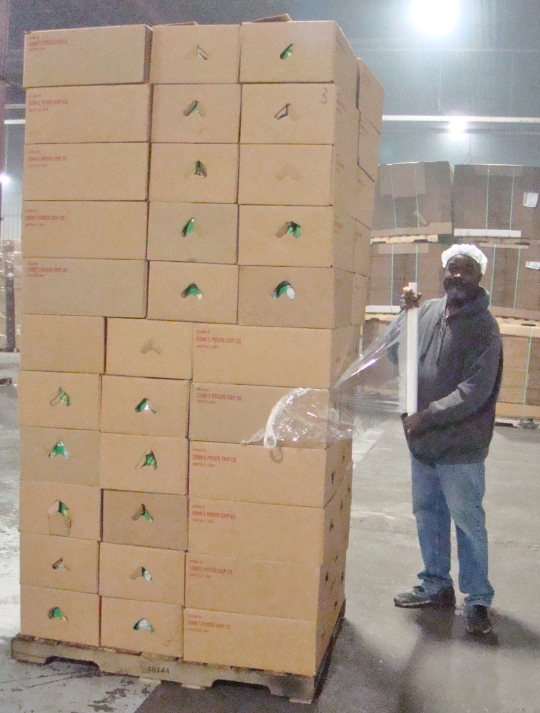 Employees enjoy their jobs as they box chips for shipment.

This was a happy workplace and everyone had smiles and waves as we visited the manufacturing facility where all they make is potato chips. It didn’t seem to matter what their job was, these pleasant employees enjoyed it from cutting, sorting, bagging to shrink-wrapping stacks of boxes. Or perhaps they were smiling because of the mandatory hairnets we were wearing.

Here in Zanesville is the only place that Conn’s potato chips are made. They do have warehouses in Newark and Columbus. 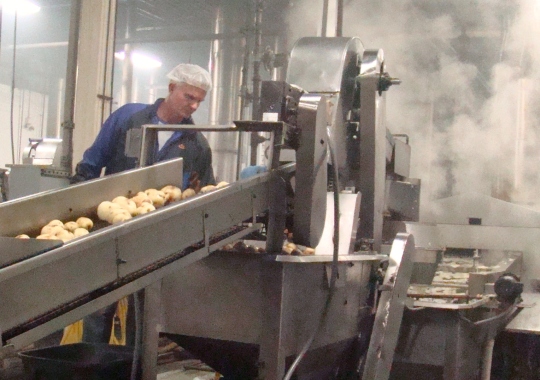 After potatoes are washed and skinned, they head through the potato slicer.

Every week approximately 100,000 pounds of potatoes are brought into the factory to be made into fresh chips. Now these aren’t ordinary potatoes you might buy in the store. They are ‘chipping’ potatoes, a special variety that has less starch and sugar.

First, they are washed with high pressure to remove all dirt. After that the skin is brushed off with many mechanical brushes. Everything is done by machine with employee supervision at each process. 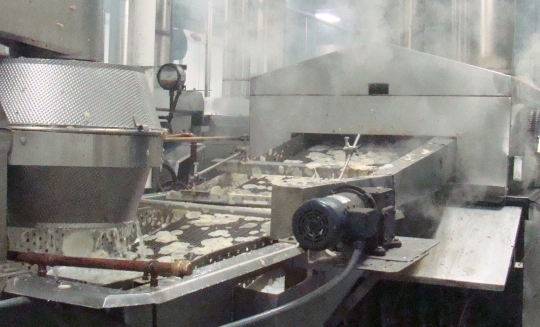 Layer of sliced potatoes heads to the fryer on a conveyor belt.

The potato cutter then slices the potatoes into potato chip size. Blades are changed once a week to make wavy potato chips, the most popular party chip for dips. Sometimes when the chips fly out of the cutter, it looks like it’s raining potato chips.

They are then sent through the deep fat fryer on a conveyor belt. Recently, some noticed a slight change in the taste, as Conn’s was forced to remove the hydrogenated fat from the soybean oil that is used. This change is due to a recent federal regulation to improve our health. 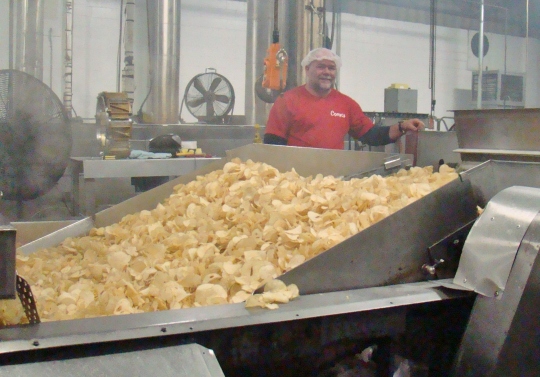 Fresh Conn’s Potato Chips leave the fryer to be sprayed with salt.

At the other end, a very find salt is sprayed on, so it’s easily absorbed by the warm chips. Now an inspector watches carefully for chips that are too well done or imperfect and removes them before they fall into buckets that look like seats on a ferris wheel to be sent to the bagging room. 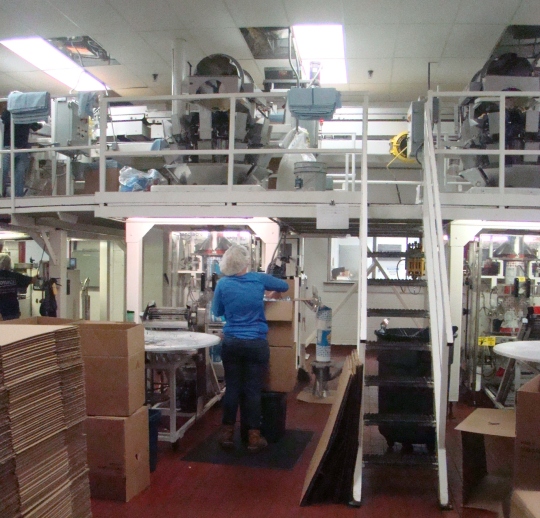 In the packing room, overhead tumblers mix the flavors before bags are filled below.

Here the chips are directed to various tumblers for packing. This is where the flavors are added. Green Onion, their most popular flavor, BBQ and Salt and Vinegar were being packed while watching. They bag in various sizes from 1 oz. to 1 pound. 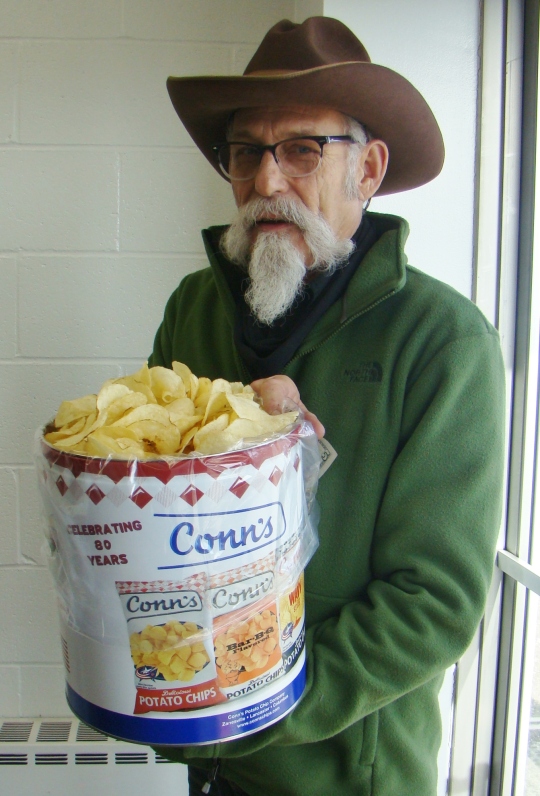 This gentleman brought in his Conn’s Anniversary tin for an economical refill.

If you want an 80th Anniversary Tin filled, they will fill it right off the conveyor belt for $5. That’s quite a savings for two and a half pounds of potato chips. Refills are only $3. If you travel that direction, and you love potato chips, it would pay to buy a tin. 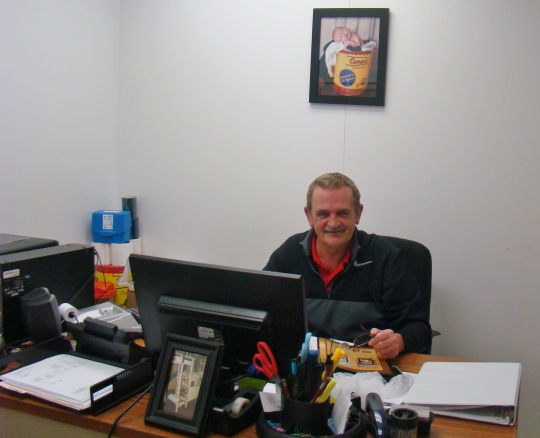 President Montie works at his desk with a picture above of his newborn grandson already pictured with a Conn’s tin.

Current owners, Montie Hunter and the George brothers – Tom and Jon, invested in Conn’s future by moving to a 100,000 square foot facility on Richards Road in Zanesville. Their new state of the art equipment still provides the same quality chips that have been favorites for generations. 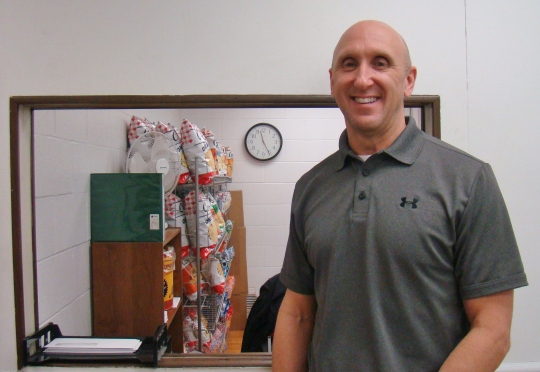 Montie worked as a route salesman for Dick so was very familiar with Conn’s. They had to make two promises when they purchased the company. 1) The name could not be changed. 2) Keep all the employees.

Tours of the factory are frequent for schools, seniors and even tour buses. Everyone comes away with the chance to have a few hot chips right off the conveyor belt. Good potato chips taste like Conn’s.