School Is In The Air 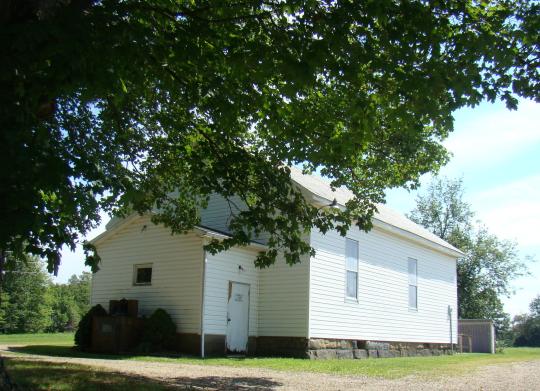 The cool morning air whispers Time for school. Memories flood back of days at a one-room school in Indian Camp. All eight grades were in one room so students helped each other climb the ladder of learning. Perhaps today is the perfect time to take a road trip leading back many years ago to Hopewell School. Chances are someone you know, or even you, yourself, have attended a similar school.

After driving the winding roller-coaster road of State Route 658 northwest of Cambridge, Ohio, the old school brings a smile. Those sturdy sandstone foundation blocks remain intact where so many students received building blocks for their lives from 1905-1955. Today the school is kept in repair while being used by the Indian Camp Grange, 4-H club, Hopewell Homemakers and once a year, the Hopewell One-Room-School Reunion. 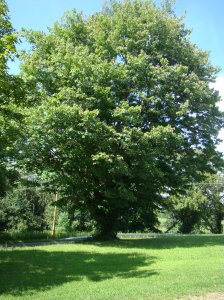 The trees have grown noticeably larger in front of the school.  Their branches provided the perfect places to sit while watching others play on the large surrounding field, or sharing secrets with your friends. In the absence of playground equipment, students played hopscotch at the top of the drive, baseball behind the school, or Annie Annie Over across the roof.

Children from miles around arrived at Hopewell School by bus, horseback, bicycle or walking. On the first day of school they proudly carried their yellow Big Chief tablet and a pencil or two. If they were lucky, they might have a box of eight new Crayola Crayons and Elmer’s School Paste.  Those scents still stir up memories. 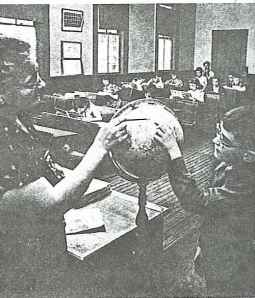 Teacher, Mrs. Mary Clark, uses the globe to explain geography  during the 1950’s.

Inside the building, the pot bellied stove and the old desks are gone. The teacher or a student who lived close by came early in the morning to get the room warm for students. During the day, the boys took turns filling the coal bucket at the coal shed behind the school. Many boys volunteered for this chore and took their time, some even sneaking a smoke in the coal shed. But other things are still the same. An original blackboard still has initials carved in it, and the closets where coats and lunches were kept are exactly as they were years ago.

Lunches were brought in either a paper bag or a metal lunch box, which might last for several years. A personal favorite had a picture of Roy Rogers riding Trigger, and it even had a thermos. Lunch might include a bologna sandwich, boiled potato, dill pickle, and on special days, a thermos of homemade soup.

Since there was no water on the grounds, the boys carried water from a near-by house. After it was poured into a large keg at the back of the room, students would use a dipper to get a drink – everyone using the same dipper and no one getting sick!  No water also meant outdoor toilets with a rather unpleasant smell, flies, and even an occassional varmint. 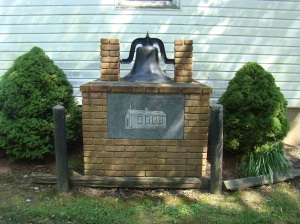 In 1994, former students constructed a brick base with a picture of old Hopewell School engraved on a plague and words that expressed the aim of the school: “Whoso Desireth Education, Desireth Knowledge”.  At the top of the base sets the school bell that called students to school in the morning, and reminded them that it was time to return to the classroom after recess. Students didn’t always stay on the grounds during recess as some went to Gerty’s Store just down the road, or in winter time might be sledding on the neighboring hills of the Cowden family farm. This bell is a beautiful heritage to the people that have received their education here, and also to their children for generations to come.

In spite of all the old-fashioned ways, lessons were learned and life-long friendships were developed. The one-room school was the perfect place to be taught the 4 R’s – Reading, ‘Riting, “Rithmetic…and Respect.

If you would enjoy a trip to the country to see Hopewell School, follow State Route 209 west from Cambridge, Ohio through Browns Heights. After a couple of miles, turn right on State Route 658 and continue until you reach the town of Indian Camp. At the north end of Indian Camp make another right hand turn on Mt. Herman Road. You are there!