Chillin’ Out at the Columbus Zoo

Have cabin fever? Put on your warmest clothes and visit the Columbus Zoo for an entertaining, learning experience. Upon arrival,  a few snow flakes bounced through the air, but before long the zoo was blanketed in a cover of white.

Even on a crisp, cold winter day, the zoo had many visitors, although just a small portion when compared to a summer visit. Many animals were inside display areas or tucked away in barns just waiting for the summer season to arive, but there was still much to enjoy. 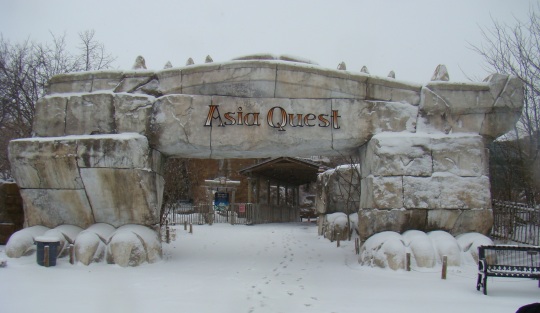 While the present Columbus Zoo opened in 1937, Jack Hanna, graduate of Muskingum College, developed the zoo into one of the best zoos in the United States. Hanna served as director from 1978-93 and still serves as director emeritus. Today over 9,000 animals live there. 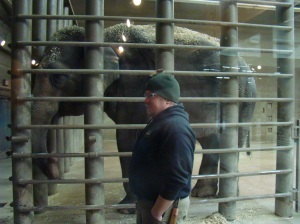 This young elephant was inside bars during petting and feeding.

Columbus Zoo & Aquarium provides something for everyone through five main areas: North America, Asia Quest, Australia & Islands, Congo, and Heart of Africa, the newest exhibit, which was closed on this visit. Still numerous displays make a visit worthwhile and memorable during the winter months, without the usual stops at the many gift shops and snack stands along the way.

While it’s impossible to mention all the adventures this winter day, here are a few gypsy highlights.

Hank, the largest elephant in a North American zoo weighed in at 15,600 pounds and measured 9’5″ tall. That’s one big elephant! People had the opportunity to pet and feed one of the smaller elephants, who kept looking for more treats.

Two Siberian Tigers lounge on top of their cave.

Outside on Tiger Walk, several Siberian Tigers lounged in the snow, while one snuggled up in a corner of a stone cave. They watched movements carefully, probably ready to pounce at the slightest provocation.

Discovery Reef’s Aquarium provides a warm break in the day where you can sit and watch the fish among the coral reefs.

On a winter day, you might want a break from the cold, and a chance to rest your legs. Several possibilities exist. The giganitic Aquarium at Discovery Reef provides bleacher seats to watch the antics of the fish in a 100,000 gallon salt water aquarium. When you observe all the different species of fish from around the world swimming peacefully together, it seems there might be a lesson for those watching.

Close by, manatees also entertain as they pull lettuce and cabbage as a tasty treat from the surface of the water. Or perhaps you might want to slither over to the Reptile Building to see the snakes, lizards, and even turtles.

Visit North American’s Polar Frontier, which opened in 2010, to watch polar bears enjoy the new fallen snow. They like to be clean and dry as dirty fur provides little insulation, so they take a bath by rolling in the snow. Imagine the polar bears thought the weather perfect.

The Columbus Zoo & Aquarium is open every day of the year except Thanksgiving and Christmas Day. Of one thing you can be certain, every day’s a different experience while at the zoo. You never know what the animals will do next. Go to the zoo any season of the year!

To visit Columbus Zoo & Aquarium, take I-270 around Columbus, Ohio and use Exit 20. From there you will see signs directing you to the zoo. You’re sure to have a great day!

Peace at the Palace of Gold

Palace of Gold from Rose Garden

Step out of the Appalachian Mountains of Moundville, West Virginia into the Palace of Gold, which reminds many visitors of life in India. “It felt like I was coming home,” described the feelings of one recent guest from New Delhi.

Greeted by Andy Fraenkel, master spiritual storyteller, we were led on an in depth tour of the Palace and grounds. Andy also explained through story, many of the beliefs of the people who built this magnificent structure. Only outside pictures were permitted at the Palace of Gold. 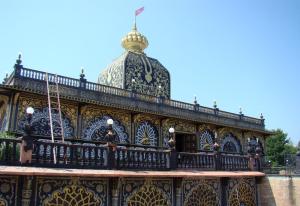 This beautiful golden temple glistens in the sunlight as sunrays catch on the gold coated roof and walls. Construction began here in 1974 with the intention of making a beautiful home for Prabhupada, who founded the Hare Krishna Movement. While Prabhupada did visit the Palace four times during its construction, he never got to live at the Palace due to his death in India two years before it was finished. Upon its completion in 1979, it became a memorial and an instant attraction.

It was decided to build a palace around the original home, adding abundant marble, gems, and gold to make it remind others of similar places in India. This was a huge undertaking and took five and a half years to complete at a cost of $400,000. That may not seem like much for a beautiful palace, but costs were kept low due to volunteer labor of the commune that lived nearby at that time. When the Palace of Gold opened in 1979, 25,000 people were on hand.

Before entering the Palace of Gold, you will be struck by the beauty of their famous Rose Garden, the perfect place for a time of meditation amongst the beauty and scent of the blossoms. There are over150 varieties of roses plus a hundred water fountains to add to the ambiance, as you bathe yourself in the morning sun. 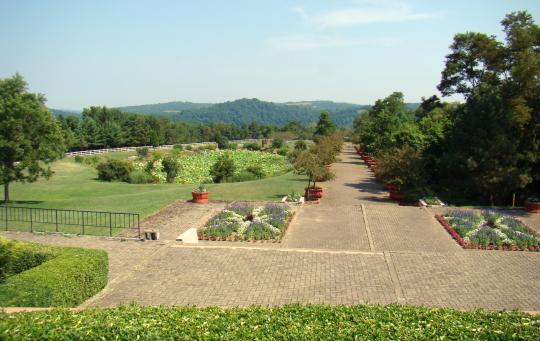 A lotus pond is covered with blossoms in this secluded Garden of Time. It’s the perfect place to spot a white swan or duck floating among the lotus. The pathways around the grounds make a peaceful place to walk with nature, and enjoy blossoms from spring through fall. Gorgeous peacocks are frequently seen wandering through the garden as well. From here you can see vistas of three different states.

Now it’s time to discover the inside of the Palace of Gold. Sunshine again plays its role in enhancing the stained glass windows. Sparkling crystal chandeliers reflect inner light from the mirrored ceilings. A Great French Chandelier, over 150 years old, brightens the room so semi-precious stones and pure gold glisten. While it is called the Palace of Gold, there are actually only about 80 ounces of gold used in construction. Gold leaf was applied in very thin sheets, 1/1000″ thick, and brushed onto the walls and ceiling. 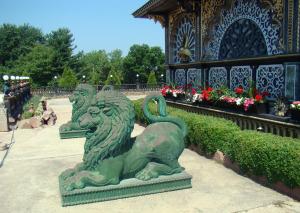 Lions guarding the Palace of Gold

As you walk on floors of marble imported from Europe, Asia and Africa,  there are designs on the walls describing the Krishna religion. One wall had several peacock designs as they are a symbol of royalty and bring good fortune. Lord Krishna wears a peacock feather in his hair.

Cows and elephants have their special place also. The cow is revered as a source of food while the elephant is a symbol of wealth as kings rode them during peacetime and wartime. During the 1980’s, an elephant actually stayed on the grounds near the Palace of God, but it didn’t like the cold weather.  So they actually got a semi and sent the elephant to Florida on vacation for the winter. But that expense only happened one year!

The Palace is home to those of the Hindu faith, whose many denominations are all religious manifestations of Dharma. Andy explained, “Each one of us has different unique abilities. Use your talent as an offering to God.”

According to the Dharma teachings: “The path to enlightenment is very simple – all we need to do is stop cherishing ourselves and start cherishing others.”

The Palace of Gold is located at 3759 McCreary Ridge Road outside of Moundsville, WV. Take route 250 South, which is a curvy, mountain road and watch for signs to direct you to the Palace of Gold. It is very well marked.