Make Your Memory a Tradition at Pearl Valley Cheese

Pearl Valley Cheese is today nestled in the valley along State Route 93 between Fresno and Baltic.

“This has been a great year for us!  We won the 2017 Ohio Grand Champion Swiss Cheesemaker at the Ohio Swiss Festival.  What a testimony to our amazing farmers, employees and especially all our customers who continually support us year after year.”                              ~Pearl Valley Cheese

Their original business sat in the parking lot of today’s Pearl Valley Cheese.

Pearl Valley Cheese has been a family owned business since 1928. No wonder they have excelled at making the best cheese around. They credit their success with farmers bringing them high quality milk, employees who all seem like family, and wonderful customers from all over the area. It’s not surprising they have won many state, national and international awards. 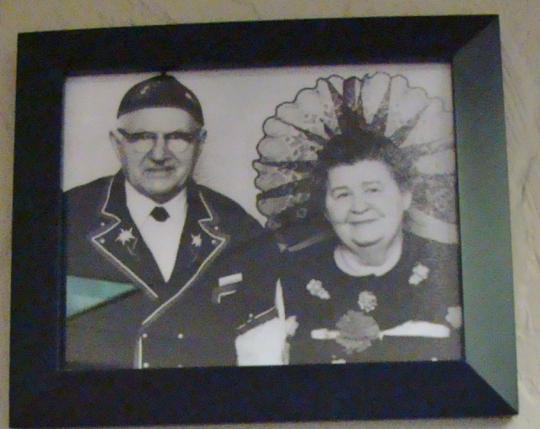 Founded by Swiss immigrants, Ernest and Gertrude Stalder, area farmers brought them their fresh milk in cans by horse and wagon. They purchased the building, which was on today’s property, for $700.

This was the original copper kettle used for making cheese until WWII.

Ernest thought it needed a little improvement so began hauling wheelbarrow loads of bricks from a nearby source until he was satisfied with its appearance. In those early days of 1928, cheese sold for eleven cents a pound. 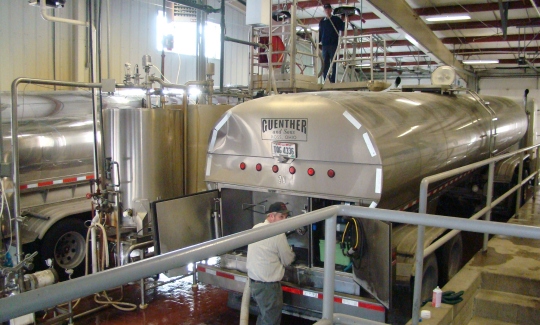 A stainless steel tanker is unloading a morning load of milk after it had been tested.

All the milk they use today is of top quality and as safe as they can possibly buy. The milk comes from about 50 area farmers and two milk marketing co-ops. Dairy producers are very important because high quality milk makes high quality cheese. Each load is tested for antibiotics, and the whole load would be disposed of if any were found. This rarely happens. 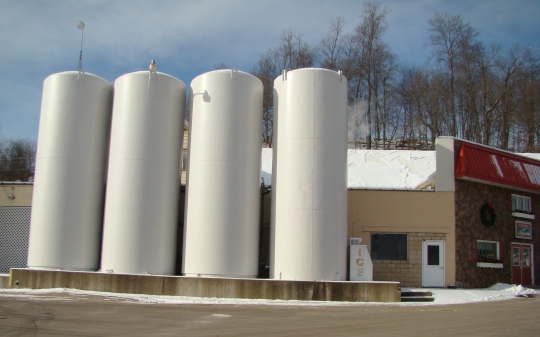 These cold wall silos hold the milk until ready for pasteurization.

Once the milk is received, they store it in cold wall silos until time for it to be pasteurized to make sure bacteria counts are minimized. Then the milk is cooked in Double Os, which look like ‘large stainless steel crock pots’, holding 4000 gallons each, until the curds are formed. Around 30,000 gallons of milk are used at Pearl Valley Cheese each day, resulting in 25-30,000 pounds of cheese daily.

The separated cream is sold to a butter factory in Wisconsin. Pearl Valley buys back truckloads of butter monthly to sell in their store and to their wholesalers. A pound of that delicious fresh butter came home with this gypsy.

They process the whey and send it to other companies, who dry it and use some of it in nutritional whey protein drinks, animal feeds and other food products. Some of the excess whey is stored at Pearl Valley in a waste water treatment plant, where it is refined into methane gas, then used to create electricity for their business. Pearl Valley has gone green.

The curds and why are separated on this draining table by churning arms.

Through a window to the left of the cheese store, you can watch cheese being made most weekday mornings. See giant vats of milk being turned into curds on their draining tables, and then packed into cheese rolls or wedges.

After the curds and whey are separated, the curds are pressed into tubes and wedges.

Only two major cheeses are made here: Swiss and Cheddar, and four different kinds of each. At the end of the day, everything is cleaned and sanitized to maintain their high standards. 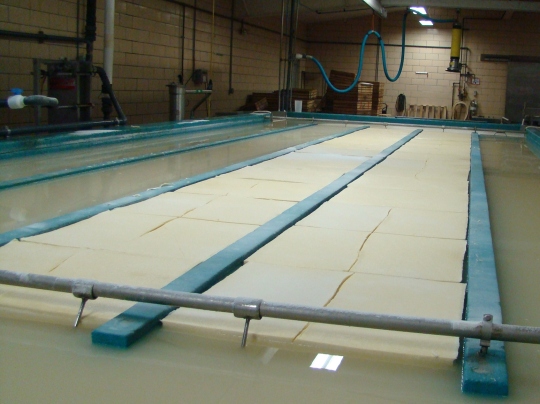 Large blocks of Swiss cheese float in the brine to add a touch of salt to their taste.

Swiss cheese is often more expensive because it takes more time to make. Once blocks of Swiss are formed, they are then soaked in a salt brine to absorb a small amount of salt.

Sally Ellie, my guide on this trip, explained the crates of Swiss cheese in the warming room where they wait for the bubbles to burst.

After this they are placed in a warming room at 76* where the cheese is placed in wooden crates where it “creates the holes”. Those round holes are caused by carbon dioxide bubbles in the cheese, and take weeks to appear.

Ohio is the largest producer of Swiss cheese in the nation. While several local places make Swiss Cheese, the Stalder family feels Pearl Valley makes it better than anyone else. Their Mild Swiss Cheese is an area favorite. 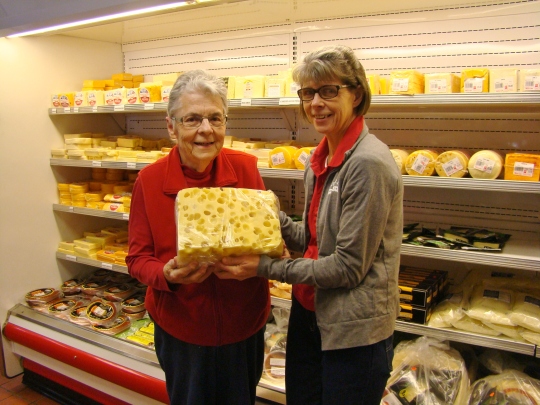 Four generations of that Swiss family are still working there today headed up by John and Grace Stalder and their extended family. Grace shared her story of joining the Stalder family 60 years ago when she married John, the son of Ernest and Gertrude. The next morning Ernest was at their door telling Grace she needed to total lines of figures that very day. She’s been working there ever since.

They feel with all their experience, they know how to make cheese the very best way. Even though they have a retail store, they want your experience to be more than a buying adventure. They want to educate you on how the cheese is made from farm to table. 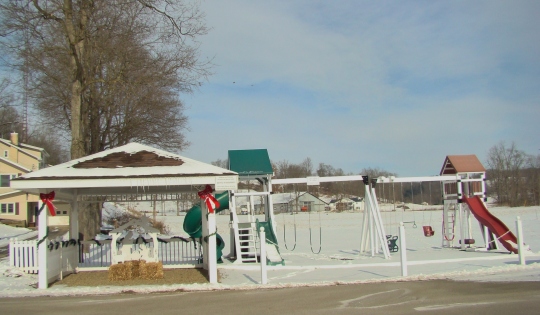 There’s even a close-by playground for children to enjoy.

Customers enjoy their friendly service with plenty of free cheese samples so you can always get a taste before buying. Prices are extremely reasonable so people come back again and again. Everyone has their favorites from Baby Swiss to Extra Sharp Cheddar. Visit soon and try to decide your favorite from so many choices.

Make your visit a special memory that starts a tradition of visiting Pearl Valley Cheese with your family.

Pearl Valley Cheese is located on Ohio State Route 93 between Fresno and Baltic.