Elegance of a bygone era is evident at The National Museum of Cambridge Glass, which is near downtown Cambridge, Ohio. Here you will find over 6000 pieces of handcrafted quality glassware – some of the finest in the world.

Cambridge Glass Company was founded back in 1902 with Arthur James Bennett, a glassmaker from Boston, as its president.  Cambridge was chosen as the site of this new venture because of its easy access to natural gas wells and coal mines, as well as railroads to bring in supplies and deliver the finished products. To get those furnaces blasting hot, they even had their own coal mine at Near Cut. Due to the intense heat of those furnaces, it was quite common to work early in the morning during the summer months so temperatures were a little cooler.

How many people do you think handled an elegant piece of glass from start to finish? That number could run as high as seventy five individuals! All of them were extremely proud to be part of this high quality product.

Back in 1973, a group was formed to establish this museum to display, study, and preserve the history of Cambridge Glass Co. At that time they created a revised logo based on the original one used by Cambridge Glass, but added the beginning and ending dates of operation.

Upon entering the museum, the beautiful colors and designs sparkle in rows and rows of showcases. Guides are on hand to explain the history of the glass making process at Cambridge Glass Company from 1902-1958. Back in 1902, the first dazzling piece produced was a crystal water pitcher, the Big X, which is on display at the museum.

One great place to begin your tour is in the Auditorium where they have a short video showing the glass making process. Here you will view actual films of work at Cambridge Glass back in the 1940s. These color enhanced films show workers of that time gathering, shaping, etching and engraving their beautiful glass pieces. There are also on display several original pieces of equipment, which were used at Cambridge Glass Company.

Etched glass attracts the eye of almost everyone who appreciates the beauty of fine hand workmanship. Some of the etched patterns have real gold fused on the glass for trim. as well as gold in the intricate pattern of the etchings. Rose Point is the most popular etching with elaborate wild roses midst vines and leaves. Rose Point is the most collected pattern and while it is usually in crystal, it can be found rarely in other colors.  The guides will often let you experience the method of etching using templates from Cambridge Glass. 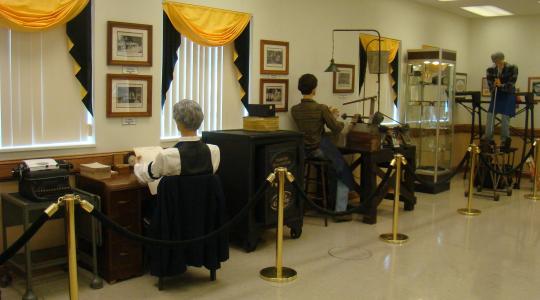 The interpretive area sheds light on the history through an interesting display of tools and molds used during their productive years. Here you see an office worker overlooking the time sheets, an engraving table with a high tech bucket cooling system, and the popular glass blower. The addition of color to the glass made Cambridge Glass even more sought after as a collector’s item. As early as 1903, colors of Opal, Turquoise, Blue, Green and Amber were being produced, but not very extensively. Gradually more colors were added and in the early 30s a glass chemist created some of the most popular colors for collectors today.  Everyone has their favorite, but one of the most popular colors  is Crown Tuscan, a flesh colored pink milkglass, while other favorites are Carmen, Royal Blue or Amethyst.

Department stores in that era used Cambridge Glass in their displays for various reasons. These stores used glass holders to display their perfumes and millinery, as well as sparkling glassware displays. Some of the items that are in the museum today were actually purchased from Chicago and New York department stores.

necklace purchased there a couple years ago made from the milkglass wing of a Cambridge Glass swan.  Special memories are included since my father worked at Cambridge Glass from the age of twelve as a carrying-in boy, and later as a presser, finisher and glassblower until the plant closed.

Add some sparkle to your life and stop by The National Cambridge Glass Museum to view fascinating local history. Join visitors from all over the world while you learn more about the rich heritage of glassmaking in the Cambridge area.

The National Museum of Cambridge Glass is located in Cambridge, Ohio on 136 South  Ninth Street, just half a block off Wheeling Avenue. Head to downtown Cambridge off any Cambridge exit near the crossroads of I-77 and I-70. The easily recognizable Cambridge Glass logo is on the front of the museum. The museum is open from April 1st through October 31st, Wednesday through Saturday 9 a.m. – 4 p.m. and Sunday Noon – 4 p.m.  Admission is very reasonable at $5 per adult and $4 for senior.  Children under twelve are free when accompanied by an adult.  If you have any questions regarding the museum, call 740-432-4245. Visit their website at www.cambridgeglass.org .