Reading ‘Riting and ‘Rithmetic, the three Rs, were the basics taught in those early one-room schools that stretched across Ohio in the 1800s. Not many are still left standing today but those that are, hold special memories and can teach us lessons from another era. 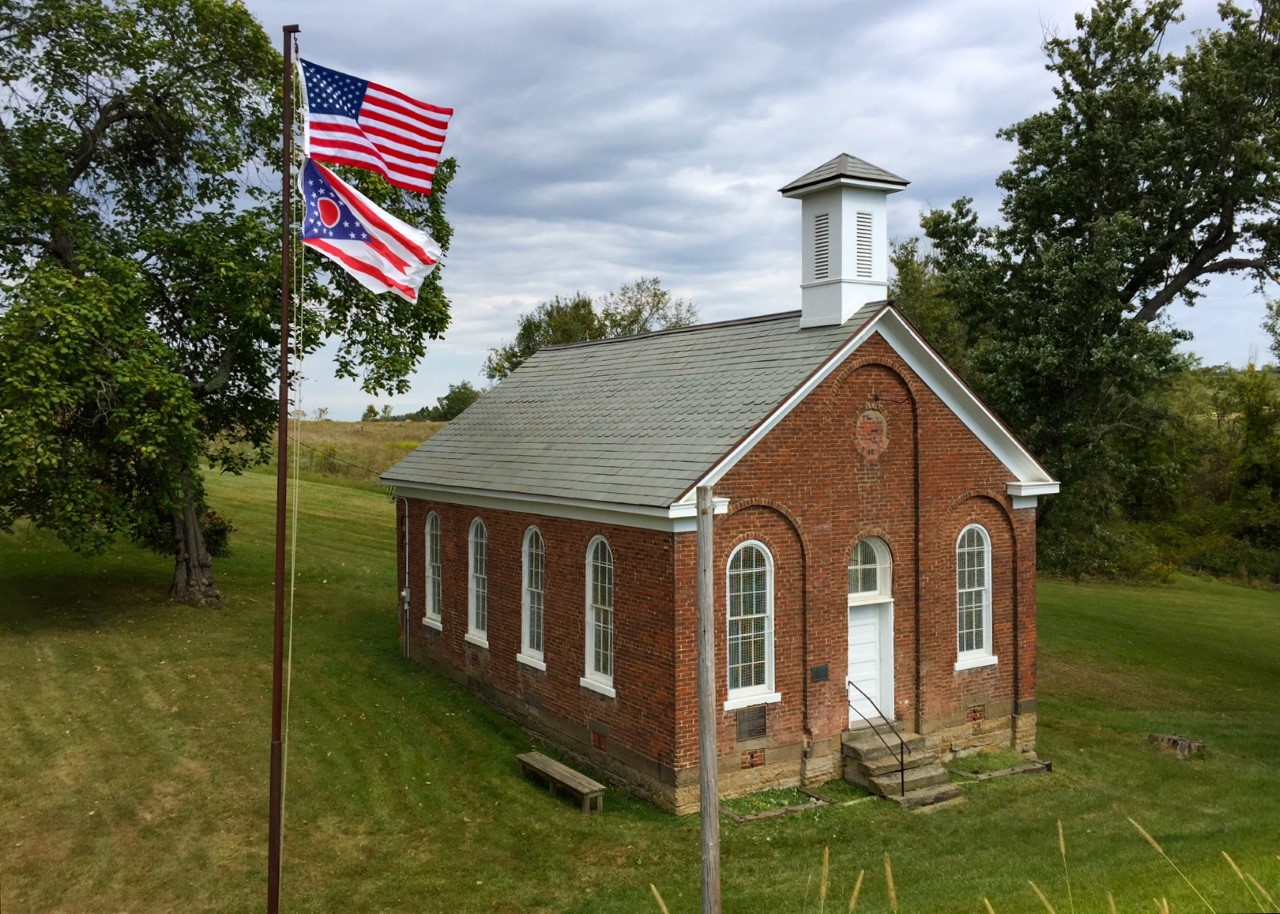 On the campus of Ohio University-Eastern near St. Clairsville, Great Western Schoolhouse has been restored for just that purpose and still stands in its original place 150 years later. Back in 1870, this school was built by Clark Construction Company of bricks made from the clay found on the banks of a nearby farm pond. The walls are three bricks thick with roughly 30,000 bricks used. It was proudly named for the first steamship, “The Great Western” which crossed the Atlantic in 15 days.

During those early days, attendance was not required but encouraged nevertheless. Most of the time, there were eight grades in one room taught by one teacher. Classes were often held from October through April, a time when students were not needed as frequently for farm work.

Great Western School was continually used until 1952. It is one of the very few one-room schools still standing on the National Road. Ohio University-Eastern uses this school to help students and children understand the schools of pioneer times.

In 1975, Dr. Robert Bovenizer of Ohio University asked the National Trail #348 of International Questers to consider restoring the building. They receive donations from former students and area residents as well as the use of grant money to complete the restoration project. An open house was held in 1976 during our country’s bicentennial.

Improvements continue to be made each year. Recently a new tin ceiling was installed in the school, and the interior walls were restored and painted along with some of the schoolhouse benches. This considerably brightened the classroom. Two sides of the exterior brickwork were restored last fall and look wonderful.

The school still has recitation benches, chalkboards, McGuffey Readers, the original schoolmaster’s desk, two outhouses, and a potbelly stove which was fired by the stronger male students. The wooden students’ desks were donated by another school.

When Ann Rattine began teaching in St. Clairsville in 1976, she visited the newly restored Great Western Schoolhouse. Ann recalled, “When I stepped over the threshold, I thought this would make a nice field trip.” At that point, she became an important supporter of the school’s development.

When Ann retired, she accepted the role of schoolmarm in the restored school. Visiting groups spend most of the day at the school, beginning the day with the Pledge of Allegiance, the Lord’s Prayer, and a Bible story – all things that were done in those early days.

Large groups of children visit here each spring to have spelling and arithmetic lessons on the old-fashioned slates. Last year nearly 500 students attended. Students are introduced to the ‘dunce hat’, which originally was used if a student didn’t know his lessons.

Old-fashioned games are also played. A Spelling Bee gives a break from traditional studies. Outside students might play Jacks, Tug of War, Drop the Handkerchief, or LeapFrog.

Ann Rattine gives new meaning to the word ‘dedication.’ Not only is she the schoolmarm, but she also does all the jobs that a schoolmarm did at the one-room school. She sweeps the floor, cleans the desks with Murphy Oil soap to have them shining, and puts the classroom in perfect order. Even the pot-bellied stove shines, although it is no longer in use.

Former students are encouraged to reminisce about lessons learned, pranks played on teachers and other students, lunch boxes, and stories of how they got to school. Many remember the ‘hot school lunch’ provided by parents during the cold winter months. A large pot would be placed on the pot-bellied stove, and parents would contribute meat, potatoes, and vegetables. At lunchtime, students would fill their water cup with a dipper of warm stew.

Drinking water had to be carried from the nearby tavern, where teachers often had their room and board. The water was poured into a large container at the rear of the class. Some students drank out of the same dipper, but most had their own cups to be used for water and stew. The boys often had collapsible cups in their pockets and would get a drink of water at recess from the pond.

Christmas celebrations included the entire community, not just students and parents. This was always a grand occasion. Last Christmas, Great Western Schoolhouse took part in the Noon Rotary Tour of Homes in St. Clairsville to show community members how Christmas was celebrated in the one-room school. Decorations consisted simply of a Christmas tree and lanterns in the windows.

When folks traveled to school in their buggies, they would use a lantern to light the way. Once arriving at the school, those lanterns were set in the windows to give light to the Christmas celebration since there was no electricity. Decorations for the tree were made by the students and included strings of popcorn, homemade gingerbread men, and dried apple slices.

Perhaps you will want to pay the school a visit in 2020 when it celebrates its 150th Anniversary. If you have a group that would enjoy the experience of attending a one-room school at any time, please contact Ann at schoolmarm2009@gmail.com . You may also receive information by contacting Ohio University Eastern at 740-695-1720.

The modern schools are large and grand and beautiful to see,

But many love the country school treasured in memory.

Great Western Schoolhouse can be found on the campus of Ohio University – Eastern just off I-70 at Exit 213 to Route 40. Turn left on US 40 West and the school will be on the right hand side.