Riding the carousel, or merry-go-round as it is often called, has always been a thrill. But usually, this was only possible at a fair or carnival event. In Mansfield, you can ride the Richland Carrousel any time during the year…for only $1.00! This is possible because the carousel is inside a building in cooler weather, with sides that open during the summer months.

Carousel Works’ owners, Art and Dan, tell their story surrounded by their creations.

Wanting to provide communities with a touch of the past, Art Ritchie and Dan Jones formed Carousel Works in 1986. Their goal was to repair old carousels and build new wooden carousels at an affordable price.

Art became interested in carving back in grade school. He first began carving covered bridges in his basement in Connecticut. When someone brought him a valuable antique rabbit to refurbish, they asked him if he could make something similar. That began Art on his journey to refurbishing antique carousels and making new ones. 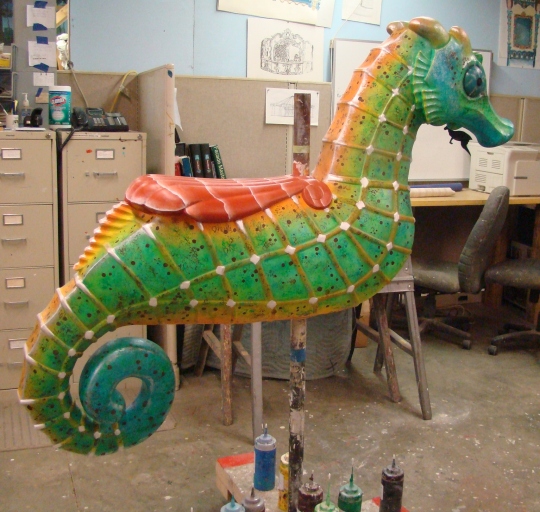 A colorful seahorse is one of their latest creations.

Due to his excellence at carving beautiful wooden animals, he especially needed help with restoration. That’s when he contacted Dan, a friend of the family, to help with restoration and finances. Soon the pair moved their business to Mansfield – a central location to many major cities in the United States – where they created their first complete carousel as Carousel Works.

Rides on the carousel are enjoyed by people of all ages.

Richland Carrousel is the first hand-carved carousel since the 1930s. Used as an idea to spur downtown development, the pavilion was opened in August 1991 when cost was 50 cents for a ride. This carousel measures 80′ X 80′ X 30′ tall at its highest point.

Above the carousel, there are paintings that depict various local attractions.

All 52 figures were designed, carved and painted by Carousel Works of Mansfield in the style of G.A. Dentzel, a revered carver from the early 1900s. Music for carousel riders is provided by a Stinson Band Organ, made in Bellefontaine, Ohio.

Children carefully choose their favorite horse or animal to ride.

Here you’ll find 30 horses but also four bears, four ostriches, four cats, four rabbits, a goat, giraffe, lion, tiger, zebra and a mythical hippocampus ( part horse, part fish). The inside animals go 3.71 mph, while the outside animals travel 6.77 mph. Children and adults enjoy choosing which animal they will ride. Or maybe you prefer to ride in a chariot! 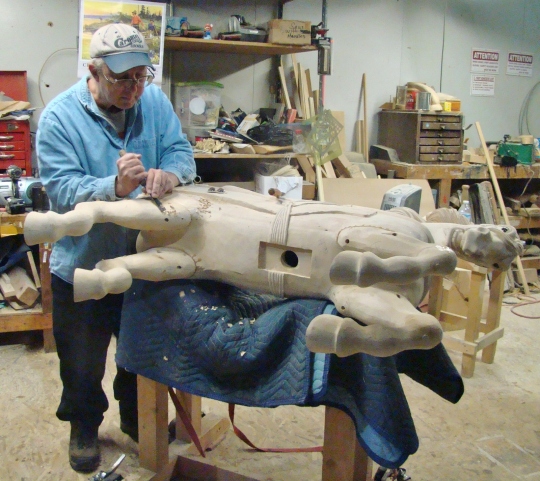 Rich has been constructing carousel animals for 28 years at Carousel Works.

Richland Carrousel is only one of the many carousels that have been built or restored by the amazing artisans at Carousel Works. Their work can be found coast to coast in nearly sixty places such as Kentucky Horse Park, Denver Zoo and Royal Caribbean cruise ships.

Our guide, Ashlea, hand paints each flower individually so each is unique.

Most of the Carousel Works’ creations include carousels where handicapped can ride easily. The horse in front of each of the chariots swivels and the chariot seat flips up to accommodate a wheelchair. Everyone gets a chance to experience the thrill of riding on the carousel.

Shawshank Fans can pick up a bottle of Andy’s Root Beer or Red’s Strawberry soda.

Ashlea holds the book that tells the story of this magical horse in “The Secret of the Carousel” written by Art’s granddaughter, A.R. Blakely.

First Friday is Family Fun Night with five rides for $2. They always have special food that kids enjoy such as hot dogs, corndogs, cookies and popcorn. Hours are from 4:00-8:00 on the first Friday of every month. Join them at the Carrousel for a child’s birthday party or just for a night of enjoyment. 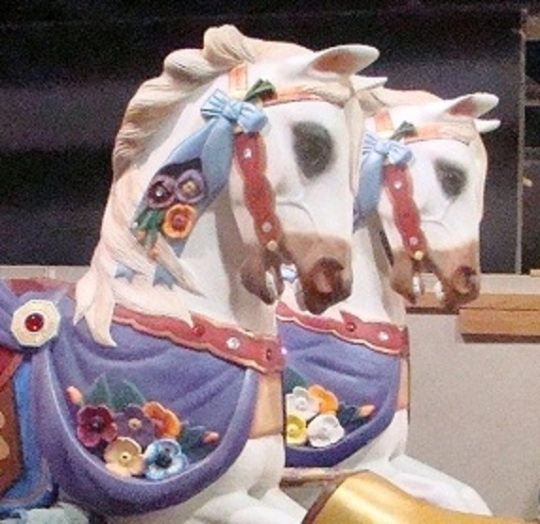 The detail on each of the Carousel Works’ creations makes them extra special.

Richland Carrousel Park is open from 11:00-5:00 seven days a week every day of the year with the exception of five major holidays. Plan now to take the whole family for a ride they won’t soon forget. It’s full of old-fashioned charm in a fun, modern setting.