The “Big House” served as home to Louis Bromfield, his wife and three daughters.

Enter Pleasant Valley to find Malabar Farm, the dream of Louis Bromfield. Tour his “Big House”, visit animals in his barn, or follow the self-driven auto tour of Shawshank Redemption film sites. Spend a day or a weekend.

Bricks for this smokehouse came from the Mansfield home of Henry Wallace, vice-president of the United States under Franklin Roosevelt.

Louis Bromfield, Pulitzer Prize winning author, was born in Mansfield. After a variety of experiences, he returned to that area for what he considered the perfect place to live. Two things he loved all his live were the farm and words.

Often Bromfield wrote at this desk while looking out the window at his farm.

It seemed he had trouble early in life finding that magical work that would please him. He went to agriculture college, studied journalism, served in the Army as an ambulance driver, journeyed through France and eventually came back to the United States to work at writing for several newspapers.

The gift shop had a fantastic selection of Bromfield’s novels.

Following those experiences, Bromfield began writing novels, which won him high acclaim. His first book, Green Bay Tree, was a big success. His novels were always based on the people and places he knew well. He used a quilt pattern by taking one piece from here and another from there and fitting them all together. He turned his life into stories. All thirty novels were best sellers and several became motion pictures.

His third novel, Early Autumn, won the 1927 Pulitzer Price for Novels. This financial success gave him opportunity to take his wife and three daughters to Paris for a few years and also visited India for a few months. How they all enjoyed life in Paris, but when threat of WWII was in the air, Bromfield brought his family back to the United States.

This portrait of Bromfield and his wife, Mary, reminded them of their happy times in France.

In 1939, Bromfield settled back into his old hometown area of Pleasant Valley, where he purchased three farms, totaling one thousand acres. Since he enjoyed the Malabar coast of India, the farm was called Malabar, which means “gently rolling hills and valleys”. 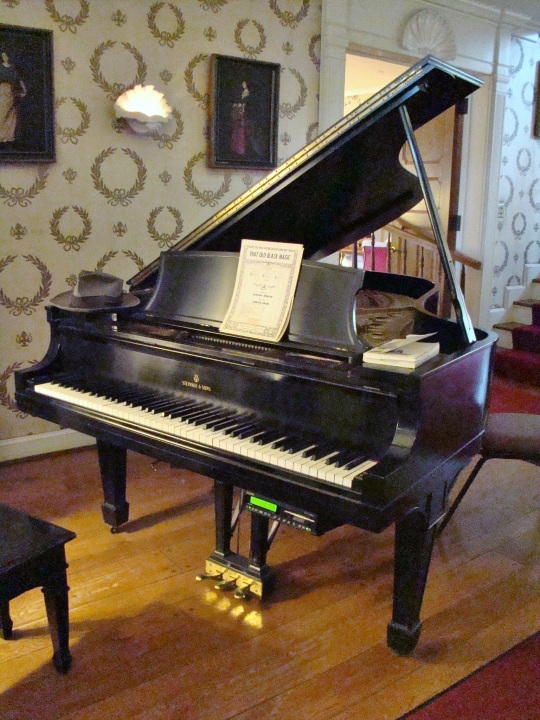 Bromfield’s daughter, Hope, played this piano for the wedding of Humphrey Bogart and Lauren Bacall.

Starting with the original farmhouse, he added several additions for a total of 32 rooms, including nine bedrooms and ten bathrooms. This “Big House” became the perfect place to entertain his guests from Hollywood. If you came to visit, Bromfield insisted you help with farm work. That’s how Shirley Temple learned how to milk cows and Jimmy Cagney to run a vegetable stand. 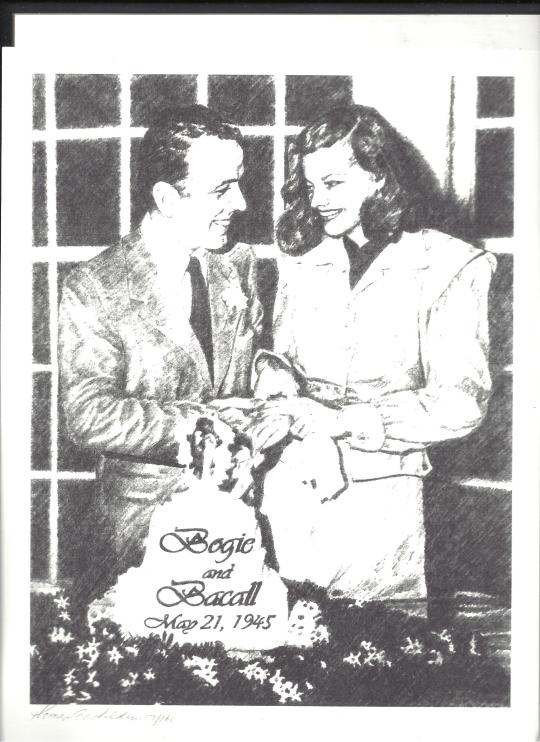 This sketch by Tom Bachelder captured Humphrey Bogart and Lauren Bacall cutting their wedding cake after being married at Malabar Farm in 1945.

A close friend was Humphrey Bogart, who asked Bromfield if he could get married at Malabar. Arrangements were made for Bogart and Lauren Bacall to have their ceremony there with 700 guests attending. 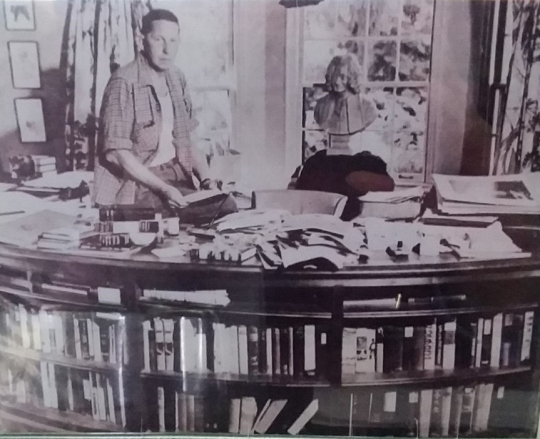 This old photo shows Bromfield at one of his desks, where he did some of his writing.

Every room of their house contains shelves of books, nearly 4,000 total. Bromfield is said to have only slept two or three hours a night so that gave him extra time to read and write novels. His daytime hours were most likely spent pursuing his interest in agriculture. 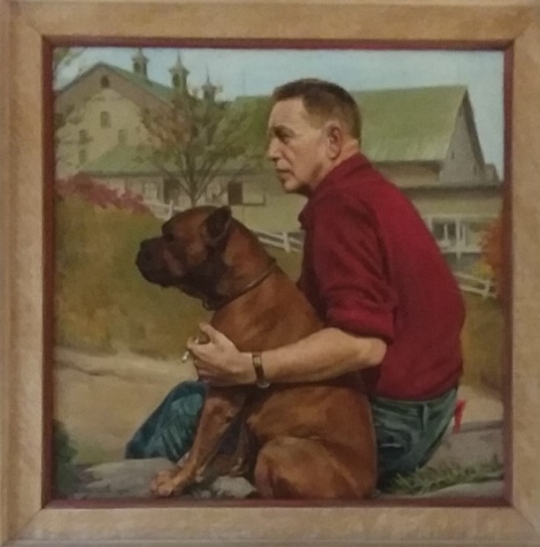 The painting shows Bromfield with his favorite Boxer, Prince.

Over seventy dogs lived at Malabar during Bromfield’s life there and eighty percent of them were boxers. His favorite boxer was Prince. There’s even a picture of a ghost boxer dog still hanging around.

Our guide, Alana, tells about the restored Jeep that Bromfield used around the farm.

His ideas as a conservationist changed the face of agriculture in Ohio. He needed to enrich the worn-out soil so planted soybeans and plowed them under to add nitrogen to the soil. Hillsides were planted around in strips to avoid erosion, and he promoted the idea of rotation of crops. His decision to use the spreading multifloral rose as a fence still angers farmers today.

Over 650 maple trees are being tapped along the road to Maple Syrup Cabin.

In 1972, the state of Ohio accepted the deed to Malabar Farm and pledged to uphold its beauty and preserve the ecological value of the farm. Everything inside remains as it was when the Bromfields lived there. Then in 1976, Malabar Farm became an Ohio State Park. 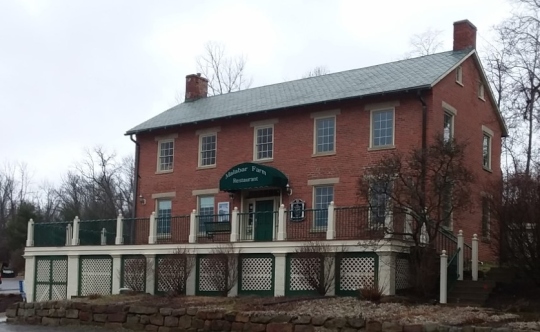 Built in 1820 from bricks made on site, the Schrack Place has become Malabar Restaurant.

There’s no charge to enjoy the trails with rocks and caves, and the tour of “Big House” is only $5. Check out their calendar at www.malabarfarm.org for many exciting activities. Don’t forget the educational Welcome Center. 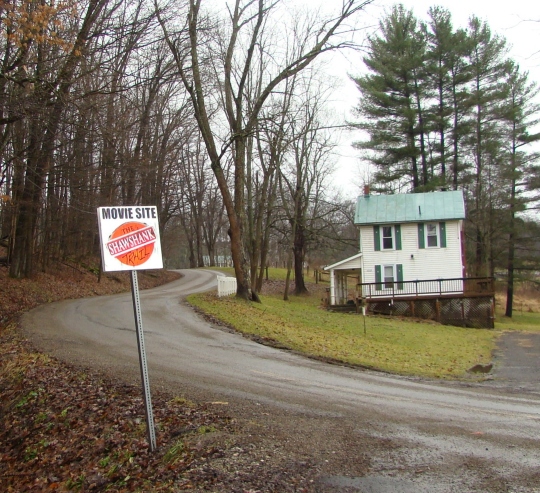 Follow the self-guided auto tour of authentic Hollywood sites from the Shawshank Redemption movie, which was filmed in part on Malabar Farm.

If you enjoy a country drive on scenic back roads, Malabar Farm might be the perfect place for an adventure. Perhaps we’ll come back for a ghost tour in the future.

Malabar Farm is located in Richland County about seven miles southeast of Mansfield. Their address is 4050 Bromfield Road, Lucas, Ohio. Using your GPS would be a great idea as there are many country roads to travel.