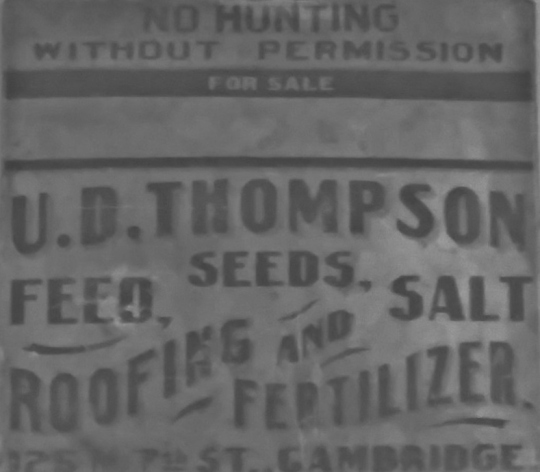 This old metal sign from 1913 stirred up family memories of their great-aunt, Emma Sherby.

Memories awaken when a picture or object appears that opens doors to the past. Recently, an original Thompson Feed Company sign brought back memories to the family of Emma Sherby as it stated: No Hunting Without Permission. 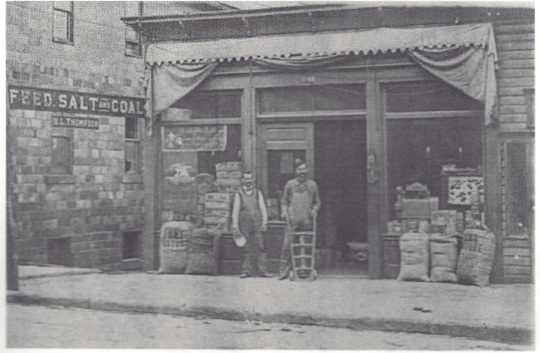 This popular feed mill was located at 125 N. 7th Street, where the Genealogical Society is located today.

In 1913, Ohio decided that hunters needed to have a license. Young Emma at the age of 17 purchased one of those early licenses for the fee of ONE DOLLAR in Cambridge at the Guernsey County Clerk of Courts. She was a very slim girl as the license listed her at 5’9” and 120 pounds with light hair and blue eyes.

Emma was the first woman to have a hunting license in Guernsey County, and perhaps in the state of Ohio.

Since the law went into effect on November 12 and Emma purchased her license on November 15, she definitely was one of the first to purchase a license and also the first licensed female hunter in Guernsey County.

Word of this early license spread quickly and an article titled “Girl Hunter Bags Rabbits for Tables of Mining Settlement” was written in the Cleveland Press on November 29, 1913. Hank Sherby still has that original article as well as the cloth hunting license issued to his great-aunt Emma.

An article about Emma appeared in the Cleveland Press in November, 1913.

Using a W. Richards Double Barrel Shotgun, her hunting ability was well known in the area as she liked to explore the out-of-doors and often bagged wildlife not only for her own family but for the neighbors as well. Some even called her Guernsey County’s Annie Oakley.

Back in 1896, Dr. Robbins came to the farm’s log cabin on horseback to deliver baby Emma. A large ledger contains this information about the day she was born: “May 8, 1896, Emma born Friday at 4 o’clock on the farm in the afternoon.” Two months later they moved to the house where Emma lived the rest of her life.

She spent her entire life in this house on Cherry Hill Road.

Her parents, Michael and Josephine Sherby, had four children: Elvin, Emma and twins Ella and Emanuel. Michael was a headhunter recruiting miners for Cambridge Collieries and rented houses on Buffalo Mine Road to miners. Later he worked for Byesville State Bank.

Dependable seems a proper word to describe Emma. She worked hard all her life. Emma never married but cared for her family by working the farm to pay bills, raising a large garden, canning chickens for winter food, and was a beekeeper to keep honey on the table. Hank describes her as “a hunter/trapper/fisherwoman..a true country girl.” Sounds more and more like Annie Oakley!

Their farm pond supplied fish for the family and also water for the miners’ homes.

Sometimes when money was scarce during the Depression, Emma would take feathers from the chickens and ducks and barter them for goods at the general store. People enjoyed having the feathers for their pillows and comforters.

Hank and his brother, Robert, fondly remember bringing in a bucket of blackberries to Emma in the summertime. She would then fire up the wood stove and bake them a blackberry pie in a small tin. Still sounds delicious! It was no secret that Emma had a sweet tooth as well.

These traps were used by Emma to capture animals for fur.

Although she had the important hunting license, Emma never cared to get a driver’s license. In fact, it is said that Emma never left Guernsey County in her life except when she had to register for Social Security.

She worked so hard that one wonders what she did for relaxation. Every day the flowers she grew gave her pleasure, but on Sundays, she could often be found riding her white horse on a trail ride in the vicinity of Cherry Hill. 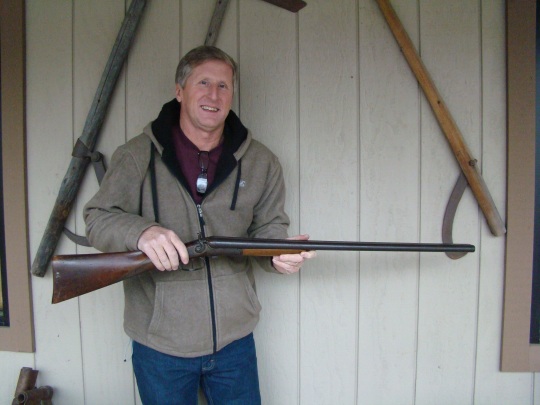 Hank Sherby feels lucky to still have his great-aunt’s gun.

Having grown up in the Depression, Emma saved everything and some would say she was a hoarder. In their barn, she had saved a pile of cherry boards that she always said would be used for something special. When Emma died at the age of 93, they made her casket from these cherry boards and had the funeral at the farm where she lived her entire life.

This lady lived from 1896 – 1983 so would have seen many changes in our world. After living through the Great Depression, it’s easy to understand why Emma saved everything. She didn’t want to have to do without again. Imagine her excitement at seeing those first automobiles, telephones, television, and even a man landing on the moon. Family remembers that Emma kept up with the news and they received four newspapers in their house. 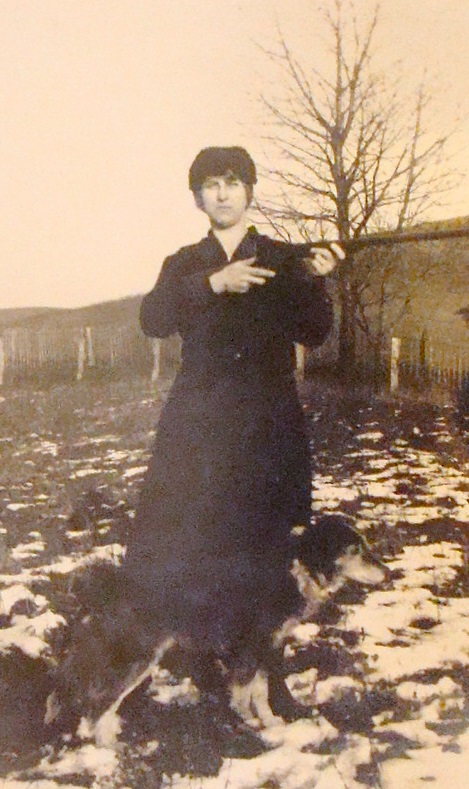 Emma hunted with a W. Richards double-barrel shotgun, a gift from her dad.

Annie Oakley expressed her feelings when she said, “Any woman who does not thoroughly enjoy tramping across the country on a clear frosty morning with a good gun and a pair of dogs does not know how to enjoy life.” Have a feeling that Emma would have agreed.

Liberated women have been with us throughout history. That’s nothing new. Emma certainly depicted that image from a very early age and continued to do things throughout her life that people today would label as ‘liberated’. Emma Sherby was just ahead of her time.