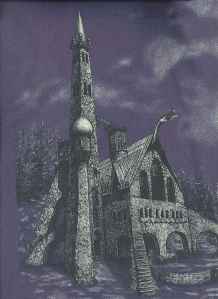 Bishop Castle: “The Largest One Man Construction Project in the USA,” and possibly the World! When you see this beautiful, magnificent castle, it is difficult to imagine that one man did all of the work.  Everyone has their dreams, but Jim Bishop’s dream turned out to be larger than most. Jim has never stopped working on his inspiration since 1969.

Located in the Rocky Mountains near Pueblo, Colorado, this 150 foot high castle is a treasure when discovered among the pines on a back country road.  Due to all the problems Jim had with governmental interference, you won’t find it listed in the Colorado travel literature.  After seeing several cars parked along the highway, your curiosity makes you wonder what the attraction is here, so you look a little more closely and discover a medieval castle peeking through the tree tops. 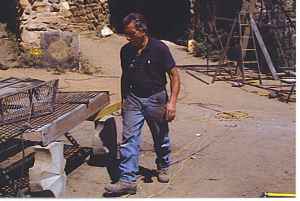 Jim works on his castle on weekends and more often during the summer.  His family also operates Eagle River Pewter in Pueblo, which explains the beautiful ironwork seen throughout the castle.  He is often seen strolling the grounds either on his way to add something to his castle, or to talk with visitors.  Seems like quite an ordinary guy with a huge imagination.

When Jim was 15 years old, he purchased two and a half acres for $450 at the edge of the San Isabel National Forest.  He had saved his money from mowing lawns, delivering newspapers, and working with his dad at the iron works. That is the year he dropped out of school as his English teacher told him, “You’ll never amount to anything, Jim Bishop!”  To begin withl the land was used for hunting and fishing, but then Jim decided to build a small cottage on the property. Since the Rockies were handy, stone by native stone was added and the beginnings of a castle rose from the forest.

No castle would be complete without a huge fireplace, but this one had a unique feature as it vented through the head of a dragon made from recycled metal hospital trays.  Smoke escaped through the nostrils of the dragon’s nose.  Just for a little added excitement, sometimes the dragon breathed fire with the help of a burner from a hot air balloon.

Inside the castle on the upper floor was a beautiful ballroom with stained glass windows, which were custom made by individual request.  Many of them commemorate a wedding held there or remember a loved one. A studio in Colorado designed the windows, and then Jim installed the stained glass beauty himself. He definitely lived by that old saying: “If you want something done right, do it yourself.” This is his unique work of art except for the wall around the water tank in the corner of the castle…his dad helped build that when Jim was first building the cottage.

The Gift Shop was the main source of funding for Bishop’s Castle as there was no charge for admission. Here you could purchase dragons, Renaissance and fantasy weaponry, Jim’s own ornamental ironwork plus all the regular gift shop items. Actually the picture at the beginning of this article is from a tee shirt purchased there on a Rocky Mountain trip.

Over the years, Jim had many legal problems with his building of the castle. At one time he posted a sign that said: Lawyers, Politicians, Bureaucrats, Gestapo  Most of you need to get an honest job.

While work is nearly complete on the castle itself after forty odd years, there are plans for a gatehouse as well as a fence around the castle. Jim has decided to let a few volunteers help him with this last phase of construction.  Men like Jim Bishop make you realize that even an ordinary man can make their biggest, wildest dream come true. Don’t forget to dream!