Everything looks very similar in this historical picture – except the cars.

Walking into Twin City Opera House is like walking back in history. On May 28, 1892, the formal opening was held for the performance of Gilbert & Sullivan’s “Mikado” by the Arion Opera Company. All 800 seats were sold!

Railroad excursion trains brought people from neighboring towns. While many were not patrons of the opera, all were curious to see this newly proclaimed “light of the day” as it was one of the first buildings in the county to be lit by electric light. The opening was not as grand as expected due to failure at the local generating plant, which caused the theater to be plunged into darkness. 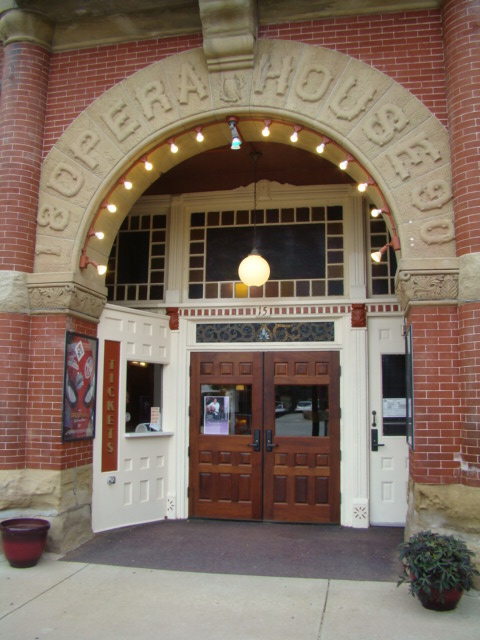 The entranceway still has an owl above the doorway.

Building the Town Hall and Opera House was a politically charged issue in McConnelsville at that time. Before the GOP adopted the elephant as its symbol in the twentieth century, the party had sometimes used the owl of its ancestral “Whig” party as its mascot. That owl still adorns the keystone in the archway over the Opera House entrance. 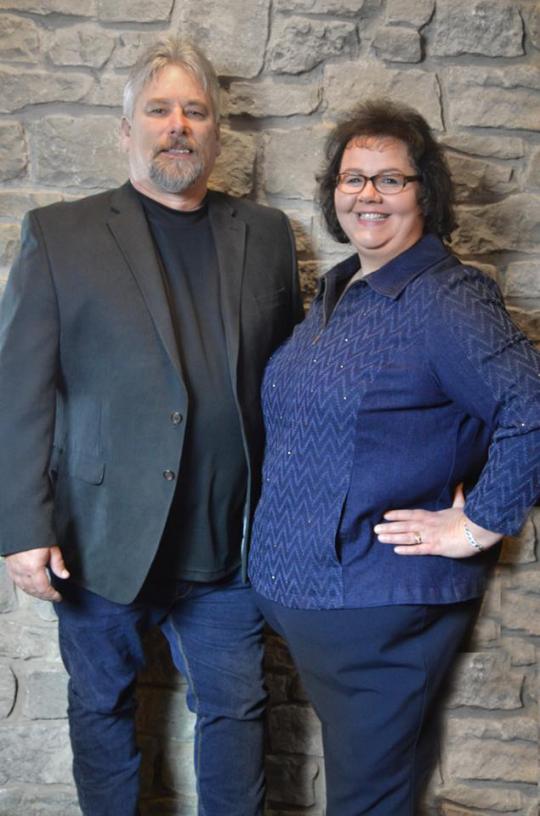 Today, The Ohio Valley Opry founded by Marvin and Deana Clark in 2000 provides monthly entertainment at the old Opera House. They toured the United States for nearly twenty years as the Marvin & Deana Clark Family then returned to the area where Marvin grew up in southeastern Ohio. 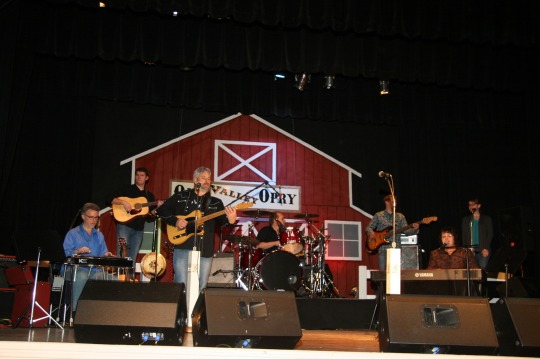 The Clark Family Band provides great variety in their performances.

During this time on the road, they played at churches, fairs, and festivals with their four daughters. Most of the time they have played Country, Country Gospel, and Bluegrass. Marvin actually writes most of the songs that the family sings. They provide music and laughter throughout their performances.

The husband and wife team of Birch and Sperry entertained with magic and the xylophone in the 1940s. This poster hangs in the lobby.

A large variety of performers and celebrities have appeared at the Opera House over the years. Evangelist Billy Sunday, William Jennings Bryan, and Senator Albert Beveridge spoke there. The most spectacular of all were the traveling shows that would arrive by train and provide lavish productions. The tradition continues today with local, regional, and national artists now performing. 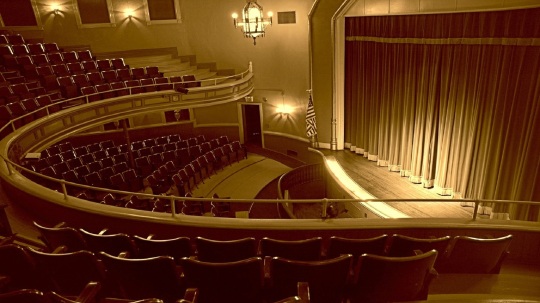 Back in 1913, a system for showing silent films was installed. The best seats in the house were those in the “Parquet Circle,” which would be the front rows of the center section on the ground floor. Those premium seats could coast as much as twenty cents, while those in the “peanut gallery” were a nickel. 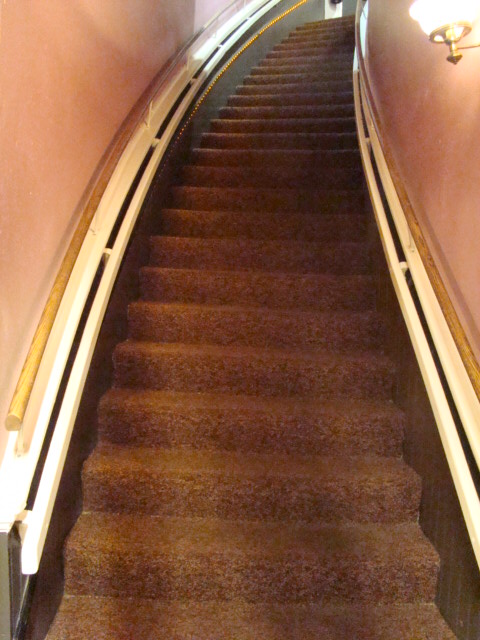 Climb this beautiful stairway to the balcony.

The first sound pictures using a “Vitaphone” system arrived at the Opera House in 1930. True “talkies” arrived in 1936. The theater still continues to screen recently released films, as it has done nearly every week since 1936. Price for viewing all films is a reasonable $4 per person.

The Travel Channel included them in their Paranormal show.

No building this old would be without some resident spirits. Ghost stories have been around at the Opera House for over forty years with paranormal investigators spending many nights there with their special equipment. Often it is listed as one of the most haunted buildings in Ohio.

United Paranormal is one of many groups that explore the resident spirits in the underground tunnels.

Some say that Everett Miller, an usher there for thirty years, watches over the Opera House and has been contacted by the investigators. Or you might see ten-year-old Elizabeth peeking from the catwalk. Deep in the basement, Dark Shadow Masses have been observed by many. Spirits seem to thrive here. Come for a ghost hunt to find out more.

It’s a beautiful drive down the Muskingum River to McConnelsville any season of the year. Check out their schedule at www.operahouseinc.com for dates and times of musical performances, film screenings, and ghost tours.

Josie points to a time capsule that her dad helped develop to be opened in 2090.

On September 21st, there will be two shows featuring country music legend, Doug Stone. Movies change each week so check out the schedule before heading to McConnelsville. The next scheduled public Ghost Hunt is December 7 and pre-registration is required.

The Twin City Opera House can be found in the center of town near the Civil War monument.

As you can see, the Twin City Opera House adds excitement to the McConnelsville area in many different ways. Make your choice – music, films or ghosts – and join in the fun.

Glimpse Out of This World at MUFON Conference 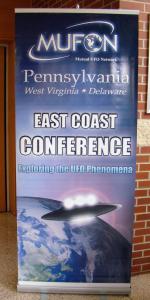 In the mountain of Pennsylvania, MUFON enthusiasts gathered at Westmoreland Community College in Youngwood for their annual conference recently. MUFON (Mutual UFO Network) is an organization investigating all reports of Unidentified Flying Objects throughout the world. Lectures were presented throughout the day, authors signed books, and visitors shared experiences.

UFOs vs Paranormal was the first lecture of the day given by Karyn Dolan. The public perception varies on these two topics as ghosts are an acceptable belief, while UFOs usually require a cover-up.  No one really likes to admit they believe in UFOs, but most people do…they just don’t want people to think they do.

If you do believe in UFOs, you have to change the way you see the whole world. The earth is no longer the only important heavenly body. People, who had been abducted, increased their psychic abilities and through meditation began to receive contact with other beings. While contact with alien life seems to change emotional levels, we all know people who are psychic vampires and drain away our energy! 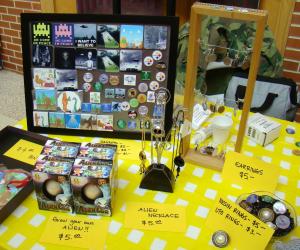 The lobby was an interesting collection of author signings, literature, Bigfoot information as well as UFO memorabilia. Bigfoot enthusiasts were also at this gathering and the history of Bigfoot legends was explained. As far back as the Native Americans, their legends discussed similar creatures in the woods. Newspaper archives were a frequent point of reference as far back as 1837 when  the first documented story in Bridgewater Bangor Daily Whig & Courier reported a hairy creature was heard whistling in the woods. Today there are many names for this hairy creature around the world:  Sasquatch, Abominable Snowman, Almasty, and Bigfoot. Researchers feel they have lots of proof…just no physical specimen! That’s a big missing link. 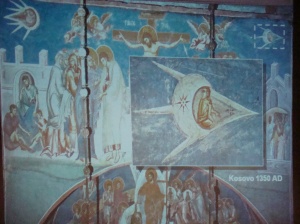 An interesting afternoon presentation showed slides of art throughout history that included strange objects in the sky…many of them shaped similar to those people classify as UFOs today. These included cave drawings, petroglyphs, Renaissance Art, and the Myans.  The oldest documentation was from The Vedic’s of India nearly 8,000 years ago.  Speaker, John Ventre, summarized, “No matter how far back in art history you go, unidentified flying objects show up.”

Ufology in 21st Century was the topic discussed by Richard Dolan, one of the world’s most prominent researcher and historian of UFOs.  His most recent book, A.D. (After Disclosure) When the Government Finally Reveals the Truth About Alien Contact, discusses the deep impact that would be brought about by the end of UFO secrecy. Many feel that governments maintain secrecy to prevent people from panicking from fear of the unknown. Perhaps aliens exist in our world today so keep an eye on some of those strange people you encounter that seem to be a bit psychic or telepathic. Contact appears to be on an intuitive level making it spiritual vs scientific. But don’t analyze too much!

Over 1100 volunteers take accounts and investigate all reported sightings. There are 3000 MUFON members world-wide in 39 countries and that is constantly expanding. In 2011 there were close to 700 sightings a month.  That number is up slightly in 2012.

While talking with Karyn later in the day, we were exchanging ghost stories. I casually remarked that perhaps my story might make her think I was a little odd. She laughingly remarked, “You’re at a UFO conference; everyone here is strange”…but all very interesting creatures!

MUFON is always looking for new members interested in the scientific study of UFOs for the benefit of humanity. There is a study guide to be completed, exam, background check and then field time with an experienced investigator. Maybe you would like to join those curious minds.