Thy leaves are so unchanging. 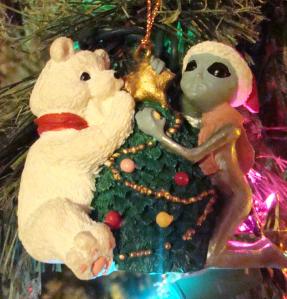 My favorite Christmas decoration is the Christmas Tree. Each ornament brings back special memories made over the years.

As a child, my memories of Christmas always centered around a pine tree. Under the tree, wrapped packages magically appeared each Christmas morning. One of the first presents I remember was a chalkboard with the alphabet written around the edge – just in time for first grade. My parents obviously encouraged my writing at a very early age. 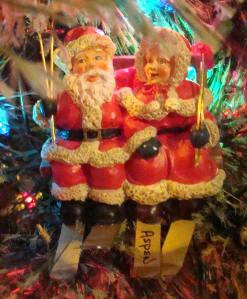 Those were the days when dad would take me in his pick-up truck down Hopewell Hill to a hillside of trees where we would pick out the very best one. Dad would saw it down, carry it down the hill, and place it in the back of the pick-up.  All the way home my eyes would be out the back window, making certain that tree remained on board.

Although mom wasn’t a big fan of decorating, she would put on the lights, then let me decorate the part of the tree that I could reach. Perhaps you can see why the Christmas tree became an important, fun part of the holiday. 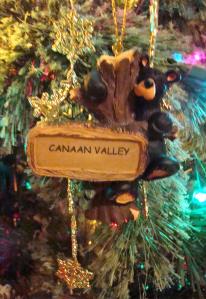 A bear from Canaan Valley is my newest ornament.

Over the years, ornaments have been accumulated from various places. Once I began my Gypsy Road Trips, when I came upon a spot I truly enjoyed, my search for an ornament began.

Now my Christmas tree looks like a Gypsy Tree with ornaments from all over the United States. No pattern or special design adorns this tree, just pleasant memories. Sometimes it takes a week to decorate as each ornament brings back happy times spent on the road. Oh, there are still a few from long ago and even some received from students in my classes, but most of them are travel treasures. 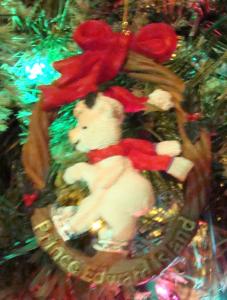 As you can probably tell, bears have a special place in my heart and they are seen in many of the ornaments hanging on my tree. There are definitely too many to share at one time, so perhaps next year you will be treated to more of the special memories hanging on my Gypsy Christmas Tree.

Here’s wishing all of you a wonderful holiday season with your family and friends. May you find peace and happiness under your Christmas tree.

As Santa would say as he drove out of sight,  Merry Christmas to all and to all a good night. 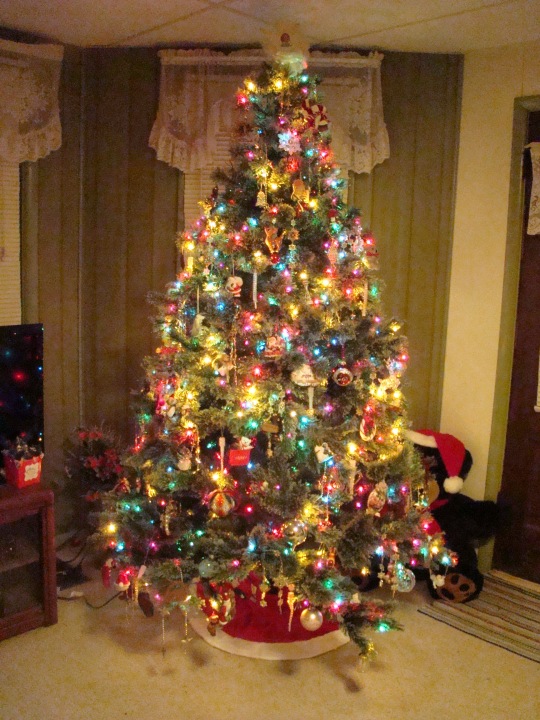 My Gypsy Christmas Tree lights up the evening.

“I know I chatter on way too much…but if you only know how many things I want to say and don’t,” exclaimed Anne, the  fictional, red-haired orphan from Cavendish on Prince Edward Island, Canada.

Green Gables is the house where author, Lucy Maud Montgomery, drew her inspiration for writing the famous children’s story, Anne of Green Gables, way back in 1903.  Since the book has sold over 50 million copies, it is understandable that the area has been developed as a tourist attraction with Anne at its center.

According to this old tale, Anne was an orphan adopted by a brother and sister on Prince Edward Island.  She was always an imaginative, redheaded girl and quite the chatterbox.  This is the story of her growing up in Avonlea and eventually teaching at the Avonlea School. 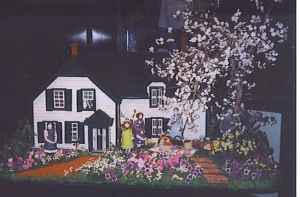 Inside Green Gables, there was a beautiful cake designed to image the house with all edible decorations. Hopefully, it was flavored with vanilla, and not liniment that Anne accidentally once used in her cake.  Within walking distance are Balsam Hollow and the forest that inspired Haunted Woods. Sometimes it is very relaxing to get away from the excitement of the day and stroll through the woods where Nature’s peace will surround you. 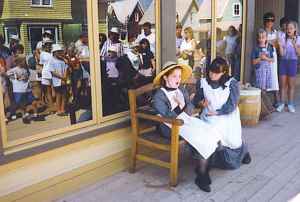 The nearby town of Avonlea is the place that Anne went to church and school. Throughout the village, bits of the story were being performed along the street and had pretty much stopped traffic, at least the walking kind. In one small shop, a woodcarver was cutting a five foot wood sculpture of Anne. 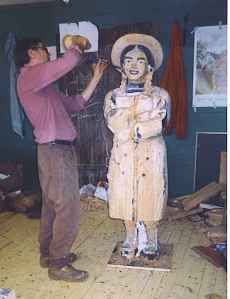 In the evening watched a local Variety Show which included everything from ballads to step dancing to fiddling. There was even a surprise performance by a local legend, who just happened to be in the audience that night.  Surprises always make these road trips more exciting.

Drove on to Charlottetown, the big city on the island, with 32,500 people. Visited a beautiful Art Gallery as well as Confederation Shopping Center, which covered three levels over a city block.   Then on to a very interesting and well done performance of “Anne of Green Gables“, the musical version, at the Confederation Centre Theater.

Beaches naturally abound on the island and one of the most intriguing is The Singing Sands Beach at Basin Head.  Here the waves don’t actually break in close to the beach, they just hum in. It is a mystical place to slip off your shoes and take a long walk. 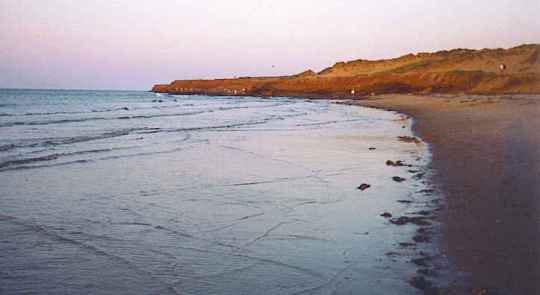 On down the road, red sandstone cliffs make for a scenic Cavendish Beach walk along the beautiful Gulf of St Lawrence.  Great place to read a good book, or go for a sunset stroll to relax from all the cares of the day, and think peaceful thoughts…or maybe plan your next road trip.

Be certain you reread the book, Anne of Green Gables, before heading for a visit to Prince Edward Island. Anne had a very inquisitive mind and leaves you with this thought:

People who live in glass houses should never throw stones!  You certainly wouldn’t want any stones in the area where this unusual Canadian attraction has three different structures made of glass bottles. 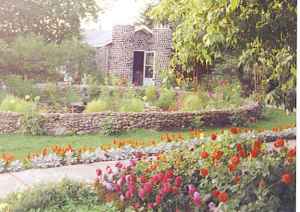 Edouard Arsenault was a native of the area and lived in Cap-Egmont, Prince Edward Island, Canada all of his life.  His occupations varied from fisherman to carpenter to lighthouse keeper. After receiving a post card from his daughter of a glass castle on Vancouver Island, Edouard decided to recycle glass bottles in a very unusual manner. After collecting bottles from restaurants, dance halls, friends and neighbors, he spent the winter months in his basement cleaning the bottles and removing the labels. There aren’t many pop or beer bottles in his structures as those bottles at that time still had a deposit refund when returned. 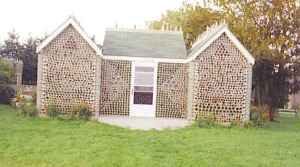 When he was 66 years old he began construction of his first bottle house, a six gabled house composed of nearly 12,000 bottles.  This interesting arrangement of glass bottles measures 20′ by 14′  and is in three sections.  Carefully cementing 300-400 bottles per row, Mr Arsenault used bag after bag of cement as he carefully arranged the beautiful patterns. Everywhere you experience the serenity and beauty of the flowers he enjoyed. 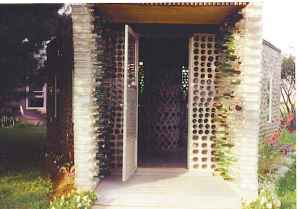 The second house, a tavern, was constructed in a hexagon shape. Built in 1982 this is a much smaller house using 8,000 bottles. The pillar of bottles, viewed through this open door, stands near the bottle bar. This bottle cylinder is the only original part actually constructed by Edouard. Originally this building was used to house the souvenirs and special bottles that he did not want to be part of the structures. Today you will find here his personal collection of bottles that he felt had extra special features. 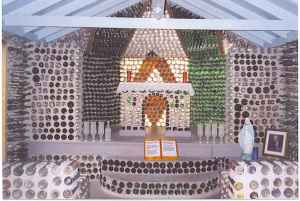 The chapel was the third and last building completed before his death.  It is a real work of art. Approximately 10,000 bottles form the chapel, complete with pews and altar. It was situated so that sunset streams in behind the altar giving a feeling of peace to those who visit.

Due to the terrible winters on Prince Edward Island, it was necessary to reconstruct these buildings in the late 1990s.  The same bottles were used in the original design.  The roof and center of the tavern are the only two that are almost completely the original structure.

A beautiful Acadian garden path meanders through the houses and ends up at the present gift shop.  Here you can find many locally made gifts as well as Prince Edward Island souvenirs.

These beautiful Bottle Houses are a real inspiration of what can be done with recycled products in our environment… and a lot of creativity.  Plus, they reflect beauty from every angle!