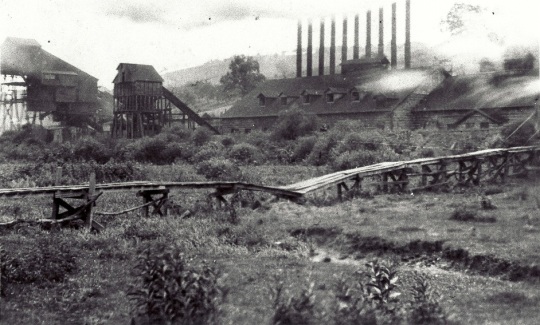 Workers used this old wooden bridge to cross from Buckeyeville to work in the Minnehaha coal mine.

Minnehaha isn’t a name most of us associate with the coal mines of Guernsey County. But the truth of the matter is there was a mine by that name back in 1906 located near what is today called Buckeyeville, or more commonly Dogtown.

National Coal Company from Cleveland had heard of the success of the Byesville coal mines. They decided to purchase hundreds of acres and lease even more west of Byesville in an area that had no name. Their first concern was the lack of a railroad to the area.

This group of children in Buckeyeville appears to be happy and they look neat and clean.

So the company paid Pennsylvania Railroad to install a track from Byesville to the new mine. This included building three bridges to cross Chapman Run. National Coal Company felt that the Pennsylvania Railroad was charging them too much by increasing the number of crossties that were actually laid.

They sent out a man to count the crossties. The man started the five-mile walk counting each crosstie but stumbled and lost count along the way. Not wanting to start over, he returned to National Coal Company telling them that Pennsylvania Railroad had actually laid more crossties than they were paid for. His secret was not known for sixty years.

Once the railroad was completed, they began bringing all the new equipment into the site including a steel tipple, generators, a coal cutter, coal cars, and an electric locomotive. A wide slope opened down to the coal seam at Minnehaha.

These water tubs supplied ten boilers, which needed plenty of water to operate.

When that mine opened in 1906, it was a very busy place. There were four boilers that made steam to turn two generators which created 250 watts of power. This was not to be used by the homes but to run the coal cutting machines and electric locomotives. The town nearby would not receive electricity until the 1930s long after the mine was closed.

Children stand at the rear of the company store in Buckeyeville.

Shortly after 1910, they began building houses in what is today Buckeyeville. By the time the mine closed, there were approximately forty houses in Buckeyeville as well as a company store, church, and school. There was no electricity or running water in the houses and rent was due the first of each month. The company store did have electricity!

This 1914 ad listed coal prices by the ton for retail rates. Check out their phone numbers!

With a coal seam seven-foot deep in places, at its peak, 320 miners and 80 day workers worked the mine. During a good year, 500,000 tons of coal would be mined at Minnehaha in spite of the fact that in the summer months miners worked only a few days a week. 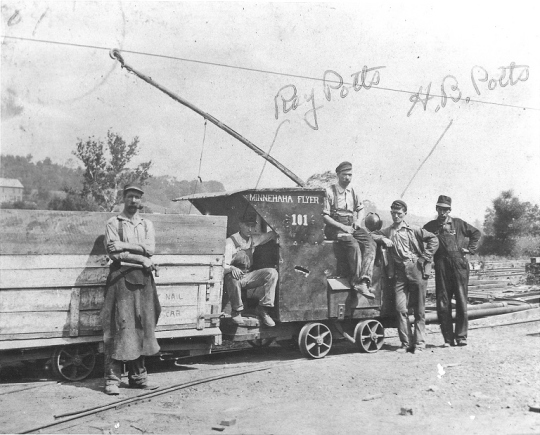 This shop locomotive carried ash and supplies to the mine. Notice the electric wires.

National Coal Company now had three mines in the area – Minnehaha, Little Kate Number Two, and Harryette. To provide electricity to all three mines they built the largest power plant in Guernsey County with ten boilers at Minnehaha.

Eventually, there were nine mines open along the railroad to Byesville. These nine produced a daily output of 100 railroad cars of coal. These cars held between 50 and 75 tons each. Train crews said they were working “the Dogtown switch.” Why was it called Dogtown? 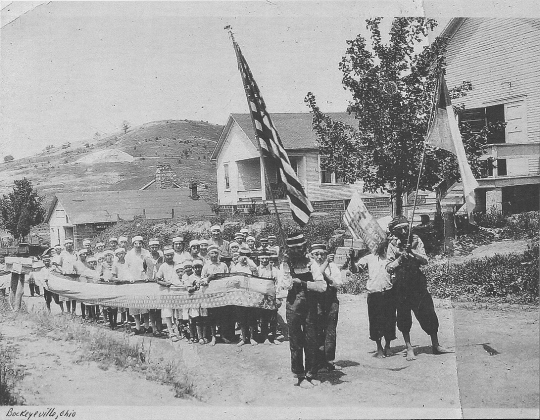 These children of miners are having a parade in 1917.

Beside the deep mines, there was a vein of coal that was not nearly as deep. Families sometimes dug into the hillsides in what was called a “scratch back mine” to get coal for their own use. Imagine working in the mine all day and then going home to dig your own coal out of the hillside.

When they tried to pull this out of the hillside in small carts there wasn’t much room. It was found that dogs could do this task quite well so families raised dogs for work in the mines. Most of the time these dogs ran loose along the railroad tracks which is why the train crews named it Dogtown. Somehow the name stuck and many people still call it Dogtown today.

There was never a doctor in this area so injuries were not properly treated. Ten men died in Minnehaha. But that doesn’t account for the fact that many had injuries that maimed them for life. Fingers, hands, and feet were lost, broken bones ruined many miners’ backs, and black lung became a curse for most who labored in the mines. This was the most dangerous job in the world.

Coal miners worked hard as they had to load all of the coal by hand using a pick and shovel. They had no vacations and were paid by the ton of clean coal that was loaded. Coal miners always worked on a buddy system for safety reasons. So that meant that when a ton of coal was loaded, that fifty cents had to be split between them. In reality, that meant twenty-five cents for each ton loaded. All of this for a two weeks pay of $15 or $16. 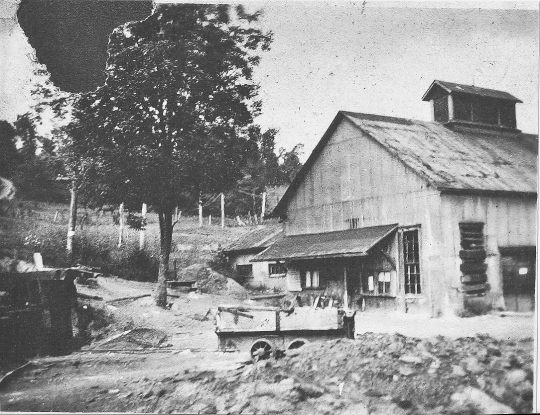 This blacksmith shop stood near the main road down to the mine.

All of their supplies had to be purchased at the company store, which was one of the first things they built. Hard to realize that the miners had to purchase their own tools, props, and wedges.

If you have heard stories of why this mine was called Minnehaha, please let me know. The name seems a bit of a mystery although it is a Dakota Indian name. Its Indian meaning translates as “rapid water” or “waterfall.” There was no rapid water or waterfall within thirty miles of the mine location.

This is a 1934 picture of Buckeyeville after the mine was closed. The bridge to work can still be seen.

Minnehaha was shut down in 1928 after much of the coal was removed. The company found that they could find cheaper labor in Kentucky or West Virginia so when their lease was up, they moved to another coal mining area. While miners here were receiving fifty cents a ton for coal at that time, the miners in the other states were willing to work for about half that amount.

Never again would trains remove coal from a town that we now know as Buckeyeville or “Dogtown.”

Thanks to Dave Adair for providing information and pictures for this article.