While climbing Grave Creek Mound, this young lady wonders about the past.

What’s inside Grave Creek Mound at Moundsville, WV? That’s a question many people are curious about. Years ago someone actually made a tunnel into the Mound and found some interesting things. An eight foot tall skeleton with copper bracelets and mica breastplate were discovered and actually placed on display for some time in a museum inside the Mound.

Alexander is doing a doctoral study on use of varied equipment to receive data on what is inside the Mound.

Now, archaeologists are not able to disturb ancient burial grounds so an alternative method of looking inside is being tried. In the spring of 2016, Alexander Corkum, a doctoral student at the University of Bradford in West Yorkshire, UK, used a non-invasive technique to investigate the Grave Creek Mound.

Modern equipment was used, such as: (ERT) electical resistivity tomography, topographic survey, GPR (Ground Penetrating Radar) survey, and photogrammetry. Most of this equipment had never been seen before in the valley. Actually, Grave Creek Mound is the first place this combination of equipment has been used anywhere in America, according to Corkum. The only previous place for gathering data with this equipment was at England’s Stonehenge, where they discovered a new Super Henge.

This GPR produces a type of picture of the internal Mound as it gets readings from electronic currents sent into the ground.

In the past, archaeologists have had digs to find pieces of history hidden under the ground. With this new equipment, they are hopeful to find images that will give valuable information about the past without disturbing the ground. Corkum feels that archaeology is destructive.

His team feels that every place does not require excavation. They feel the best way to preserve history is to keep it in the ground, while doing a remote geological survey.

The GPR had been taken up and down the mound in several directions to get as many remote sensory readings as possible. An electronic current is injected into the ground and this produces a radargram. My mind wondered if this was similar to an MRI of the ground. 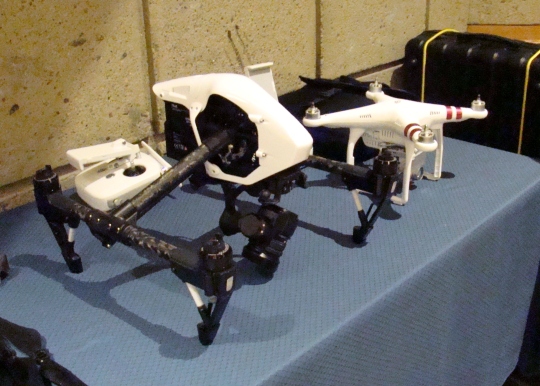 When asked why they came to Grave Creek Mound, they replied, “There’s no other place quite like it.”

For several days, data was collected but little legitimate conclusions have been reached at this point in time. They expect valuable data will be available when the results are carefully analyzed. This could take several months.

One thing the data will not clearly show are fossils and artifacts. Radar will show different disturbances in the ground area such as stones, water and soil density. 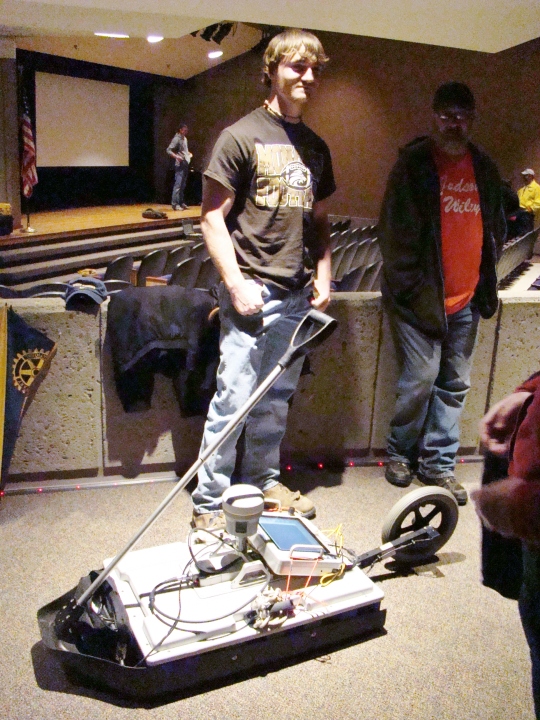 This high school student was lucky enough to get to assist with the experiments.

Jarrod, a sophomore at John Marshall High School, was fortunate to be able to assist with this project throughout the week. His youth enabled him to climb the mound time after time, pulling the equipment. Some days that included as many as seventy trips. Jarrod was very knowledgeable about the mound and interested in the process. Someday this exceptional young man hopes to become a geoarchaeologist.

A drone flies overhead taking pictures during its flight.

After the lecture, everyone went outside to either walk to the top of the mound, or watch as they demonstrated the drones taking pictures.

The final result of all this imagery will be to construct a model of the mound both inside and out. There is always something new to explore in the interesting world in which we live.