Brrr! The weather in Ohio has been bitter cold this January, so thoughts drifted to Hawaii and sunny beaches. Perhaps you might enjoy a little tropical scenery as well. While this trip was taken several years ago, the memories are still alive through pictures and journals.

The second largest Hawaiian island, Maui, often boasts the name “The Valley Isle” due to its beautiful, never-ending, scenic views. According to legend, it received its name from Polynesian navigator, Hawai’iloa, who named the island for his son, Maui, who had in turn received his name from the demigod, Maui.

Coconut Trees were a special treat.

Volcanic activity is no secret in the Hawaiian Islands, and here on Maui stands one of the world’s tallest mountains. Maui’s youngest and tallest volcano, Haleakala, measures five miles from sea floor to summit. Never fear, the last eruption happened back in 1790…but, you never know, perhaps it will blow its top again sometime soon.

Three roads will take you around the island: Route 30, The Road to Hana, and Pilani Highway. Before you head off on an island adventure, be certain your gas tank is filled as gas stations are few and far between. At the lone station in Hana, gas prices are about a quarter higher per gallon than any other place on the island. At today’s prices, that would mean $4.26 and up per gallon.

Lava fields appeared around every corner; however, there was also a great deal of agricultural activity on the island. Workers could be seen placing drain pipes in fields to be planted with sugar cane. Pineapple fields extended from roadway to ocean and the plants were just beginning to produce that delectable fruit. Surprisingly, even large herds of cattle were seen on a ranch approaching the city of Hana.

The narrow Road to Hana

The Road to Hana is one of the most scenic highways in the United States. Locals will insist that you need them to drive you over this narrow, twisting highway. But they have never been on the roads of southeastern Ohio, so it wasn’t an impossible task for this gypsy. All that was needed was a slow speed for the hundreds of hair-pin turns, and patience with other drivers. Average speed for most drivers is 15 mph on The Road to Hana, even though the posted speed limit is 20 mph. One of the main problems stems from tourists wanting to stop, soak in the tropical scenery and take pictures. Traffic congestion sometimes results, as the road isn’t very wide! 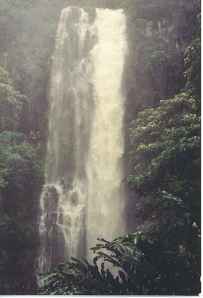 But who can resist stopping to observe the surrounding beauties of Maui? On the inland side, it’s only natural to stop at the many waterfalls along the way. Waikani Falls, also known as Three Bears Falls, is the tallest falls on Maui. Here 400′ of water slide over sheer lava rock walls to present a shimmering image.

The cascading waterfalls leading to Seven Sacred Pools were definitely a favorite spot to relax. It’s proper name is Ohe’o Gulch, one of the most popular stops on the Road to Hana. Climbing here was a cautious affair, but worth the challenge in order to swim in the pools. 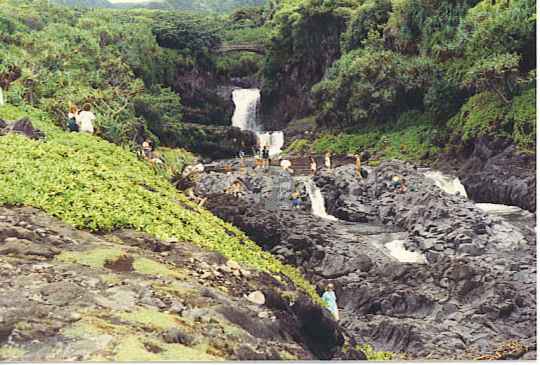 While along the coast, the Black Sand Beach entices visitors to take off their shoes and attempt to walk on the tiny black lava pebbles, which are actually volcanic rock pulverized by the ocean waves.  But near Hana, you will also find the secluded Red Sand Beach made from a collapsed volcanic cinder cone. Here you will want to wear some sturdy shoes as the red cinders are rough to the touch.

Visiting Maui brings lots of pleasure. Before leaving, pack up your pictures and memories so your thoughts can return again and again. You might even bring home a tee shirt that says “I Survived the Road to Hana”. Aloha!

Travel between islands on Hawaii usually involves a small plane or boat. Once on the islands you can rent a car to travel at your leisure. If your stay is a short one, perhaps you would rather take a shuttle, tour bus, taxi, or public transportation. Any way of travel is sure to bring an enjoyable experience.