Turn the radio on  and listen to WBPS 101.9 FM, where you can hear Good Time Oldies and Great American Standards, all day and all night.

Many remember sitting on the floor by the radio listening to those old classics. However, “watching” the radio fascinated Boyer Simcox when he was a child. While listening he saw the shows in his mind, but when TV came around the shows didn’t match his imagination. Radio always remained his preference.

The radio equipment in this one room provides entertainment throughout the Cambridge area.

Just out of high school, Boyer volunteered at a radio station in Wheeling, where he did a half hour talk show called “Firing Line”. Here he interviewed many interesting guests including John Glenn and Howard Metzenbaum. One special show happened at the time of the Kent State shootings and so many questions came in that the producer told him to keep going as long as listeners were interested.

Over the years, Boyer has held many intriquing positions where he was helping someone. One thing can be certain, he has always done what he wanted to do. He’s worked as Director of Social Services, Director of Area Agency on Aging, and even owned a couple restaurants, but always wanted his own radio station. 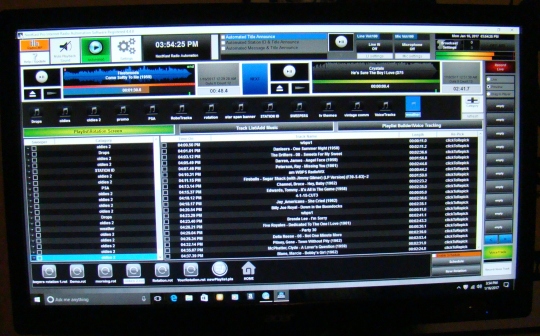 Their mixing board gives Boyer opportunity to make instant changes, or set up programming ahead of time.

Back in 1984, he called the FCC to see if a frequency was obtainable. None were available at that time, so he waited. Then in 2013, the FCC released several frequencies for non-profit or community stations. Boyer applied.

One morning in 2013, while watching the Today Show with his wife Judy, Boyer happened to check the FCC site on his tablet. He was listed on their approval list! Immediately, he handed the tablet to Judy to prove he wasn’t dreaming.

Paperwork began. Deadline for being on the air was 18 months. He decided to purchase a package with everything he needed except the antenna. When he received it, Boyer wondered, “What have I done?” There were many unanswered questions as the package had no instructions.  Boyer used the internet for information and several small radio stations formed a forum to answer questions and share information.

Work progressed slowly until he had everything assembled and all the wires connected. But when he turned it on, nothing happened. Time was getting short for his deadline, then one night at 3:00 in the morning in November, 2014, Boyer rested in bed thinking about those wires. 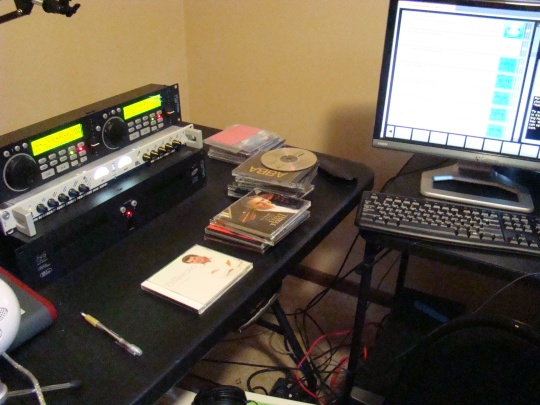 A handy supply of CDs provides variety to the programmed music.

It came across his mind that two wires needed to be switched. Changing those two little wires brought his station to life. Excitedly Boyer hopped in his car and drove all over town to see how far WBPS could be heard. When he stopped on Wheeling Avenue, he looked down and discovered that he still had on his robe and slippers. However, he discovered that the station could be heard all over Cambridge.

Boyer spends many hours at the controls of WBPS, and enjoys every minute.

Now into his third year of broadcasting, he has country-wide contacts, who share their shows with him. Bluegrass from West Virginia, polkas from Minnesota, and movie tunes from New Philadelphia are a few of those connections. The Mormon Tabernacle Choir has a featured show as well as Bill Gaither, who agreed to share his program after just one phone call.

WBPS airs around the clock these days. People listen to it all night long and also use it in the workplace because it’s happy, up-beat music.

There’s no need for local news or sports here as AVC radio stations do an excellent job of covering those items. However, Don Keating, local amateur meteorologist, does an outstanding job of broadcasting up-to-date local weather.

Boyer and Judy feel this is a great hobby that adds enjoyment to the listening area. Their cat, Mr. Lucky, sometimes tries a little programming himself.

Boyer and Judy Simcox feel WBPS is their gift to the community. They both participate in radio operation on and off the air. Everyplace they go, people stop and thank them for the familiar music. It made Boyer smile when a listener told him he wouldn’t get out of the car until a song was finished. That makes it all worthwhile.

Listeners tune in for the Pennyroyal live on Friday, the Wheeling Jamboree on Saturday and  then a day of spiritual songs – Our Sunday Best.

In the future, Boyer would like to feature more local groups on the air. If groups have a CD they would like to share, contact him at wbpsradio@yahoo.com . If anyone has an interest in volunteering or has ideas for the station, Boyer’s always ready to listen and is eager for more local participation. 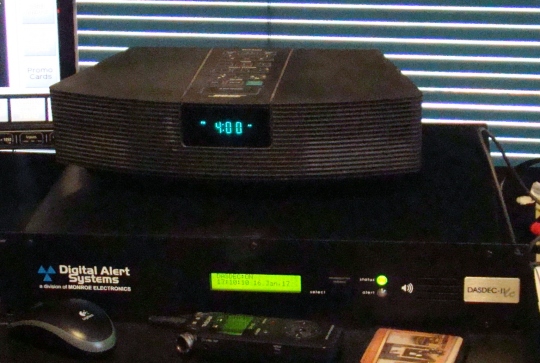 The Emergency Digital Alert System is handy for national emergencies.

If non-profit groups would like to have announcements made on WBPS, send him an email as there is no cost. He even shares them with his network of radio friends.That’s what Community Radio is all about.

When asked what he does for fun, Boyer answered quickly, “I’m having it.” His advice to everyone would be, “Don’t be afraid to try something new.” It never occurred to him that he couldn’t do it.

Music comforts the soul, especially those songs you have known most of your life. That’s why WBPS is becoming a favorite station for seniors in the area. Twenty-four hours a day,  it plays those songs that make you smile.

Listen to WBPS 101.9 FM and you’ll find yourself singing along with those old-time favorites. You just can’t help it.