On the banks of the Ohio River, climb aboard the Marietta Trolley for a ride back in history through the brick streets of Marietta, Ohio.  The one hour tour is narrated today by a lady who has lived in the area all her life so knows the history quite well. Interesting stories of famous people who have visited the area were part of the adventure.  It is a beautiful day so push open the windows and get some great pictures of the landmarks as we have frequent stops for narratives.

Marietta is the oldest city in Ohio founded in 1788 and named for the Queen of France, Marie Antoinette.  LaFayette Hotel is its oldest hotel opened in  1918.  Located where the Muskingum River meets the Ohio River, this hotel is our starting point and will be our lunch stop later in the day.

An interesting sidelight of the tour are the flood markings on many of the downtown buildings showing how high the flood waters came.  1913 looked like the year of a very high flood.  Many times the flood marks were up to the second story of the old brick buildings. 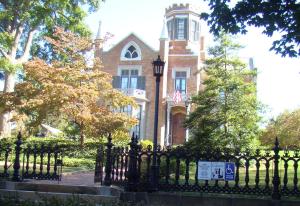 in the early days of Marietta thus there are many old churches of various religions throughout the town.  The St Mary’s Catholic Church originally housed the  College for Women in its present-day parish.

The Great Mound in Mound Cemetery was part of the tour.  The cemetery is thought to be the burial place for the largest number of  Revolutionary War officers buried in one location. Wonder if their spirits still dwell on the hillside?

Meigs House was built in 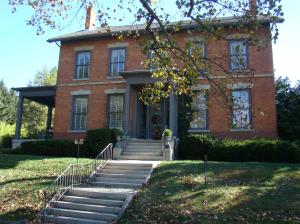 1802 (before Ohio became a state in 1803) for Jonathan Meigs, Ohio’s first postmaster, governor and US senator. This beautifully restored brick dwelling that has been used as a home and office, but appears to be a perfect place for a bed and breakfast.

The trolley ride ended with a ride through Historic Harmar Village where you can see the Coca Cola Museum as well as the Children’s Toy and Doll Museum. Gives you lots of interesting places perhaps for another day.

Bouncing back to the Ohio River, our ride ends with lunch in the Gun Room of the LaFayette Hotel.  Maybe you can come back again with some friends and enjoy another trip through Marietta. What an interesting ride!