Since the prehistoric Moundbuilders came to the Ohio Valley and Marietta, sometime between 800 BC and 700 AD, those early ancients remain quite mysterious. It is thought the Adena culture built The Great Mound, where Marietta Mound Cemetery is today located. The Hopewell, descendents of the Adena culture, are responsible for a portion of the mounds in the Marietta complex.

Sacra Via – The Sacred Way

From the Muskingum River to what is now 2nd Street, a roadway called Sacra Via, meaning Sacred Way, was constructed of white crushed mussel shells, which made a solid pavement. The reflective light from the moon on the mussel shells almost made it seem like a lighted path when the ships would dock on the Ohio and Muskingum RIvers. Today that Sacred Way is maintained as a public park where the Ohio Land Company members are honored. 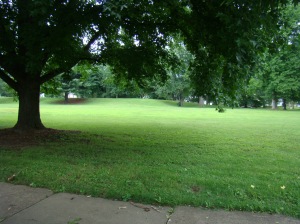 Sacra Via continued to what is now called the Marietta Earthworks. This archeological complex included a large square enclosure surrounding four flat-topped pyramidal mounds, another smaller square and the conical shaped mound in the cemetery. Brick walls enclosed the Sacred Way from the Muskingum River to the Quadranaou, the largest flat topped earthen pyramid. The walls of the enclosure were aligned with the winter solstice since astrology played a major role in celebrations and rituals of those early cultures. The bricks were removed in 1843 to use as home foundations.

The roadway ended at the largest mound, called Great Mound or Conus, where city developers created a cemetery, Marietta Mound Cemetery, in 1801.  More Revolutionary War officers are buried in this county than at any other place in the United States. General Rufus Putnam and General Benjamin Tupper, both founders of the Ohio Land Company, are buried here. Serving originally as the burial place for chieftains, 30′ tall Conus is the Adena culture’s largest conical, ringed mound still visible today.

Rock covering capsule at top of the Great Mound

To keep the mound from being destroyed, original pioneers in Marietta had the cemetery fenced in back in 1837. When a slight excavation of the site occurred, bones of an adult Adena Indian and some of his possessions were discovered buried in a horizontal position and covered with a large stone. Once it was discovered this was a burial site, further excavation was halted. The mound was sowed with grass, and stone steps were built to the top. Those same steps can be climbed today with the addition of a handrail for easier climbing.

After climbing 45 steps, the top of the tree covered mound has benches for resting and viewing the city of Marietta,   A cool breeze was welcome after the strenuous climb but it lasted only a minute.  From the top you can see the 15′ wide ditch and  4′ deep embankment that surround Conus.  An interesting stone at the top of Conus states: Beneath this stone is a time capsule placed here in commemoration of the bicentennial celebration of the United States of America. Junior Bicentennial Commission, July 3, 1976 to be opened July 4, 2076.

Here in this cemetery, seen from high on the mound, are buried a Moundbuilder chief, veterans of the French and Indian War, the Revolutionary War, the War of 1812, the Mexican, Civil and Spanish American Wars plus many heroes of peace. The spirits of those who helped build this nation live on.

Marietta Mound Cemetery is located in Marietta, Ohio off I-77. Take Exit 1 along the beautiful Ohio River following Route 7 West. The cemetery is located at the intersection of 5th Street and Scammel Street. From Route 7, turn right on Greene Street / 7th Street, then right onto 4th Street and another right onto Scammel Street. The Cemetery will be directly in front of you. You can’t miss it!