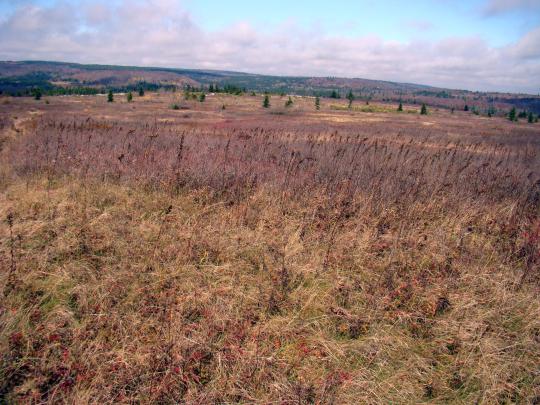 Desolate! That seems the perfect description for the Dolly Sods Wilderness. This vast, rugged back country can be found in the Allegheny Mountains of West Virginia in the Monongahela National Forest. 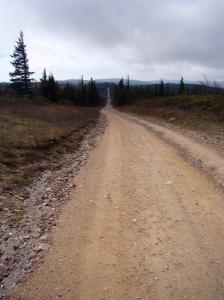 Named for a German family, the Dahles, locals added “sods”, because that is their term for an open mountaintop meadow where cattle grazed.  Over the years, the entire name has been localized to Dolly Sods.

The road to the top contains narrow, twisting, dirt roads. You just hope you don’t meet anyone coming around the bend. Add a little fog to the adventure and the trip becomes even more exciting. As you enter the wilderness area, you might feel civilization is being left behind. No guardrails line the sides of this mountain road, but hopefully the trees would catch you if you had to get close to the edge.

Flexible weather can change several times in a day. Within an hour, sun, rain, snow, and fog might all make an appearance. Cool weather prevails  and frost can occur on any time of the year. But that doesn’t deter the campers, who camp out year round. 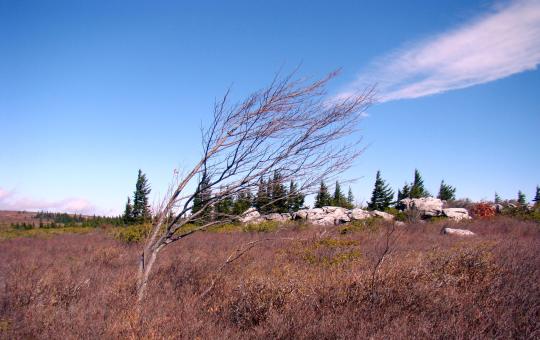 Winds blow fiercely here as witnessed by the red spruce trees, whose branches grow on one side, the side away from the wind.

During the early 1900’s this mountain top was a great source of timber for the United States. At that time, some of the trees measured 13′ in diameter – quite the giants! Those early settlers cleared the field completely of all growth and brush. Sparks from the locomotives, saw mills, and logger’s warming fires set fire to the field to burn everything off; the peat burned for years as it was seven to nine feet deep.

Today, little growth remains on the top of the Dolly Sods, but a new crop of trees is growing at lower levels. Right now this high plateau can best be described as a vast “nothingness”, but low growing blueberry and huckleberry bushes, wild strawberry plants and even a daisy can be found struggling for existence.

Many trails exist to explore the wilderness and you don’t have to worry about reptiles as they don’t want to hang around in the cold. When you finally get to the top, rocks and low growth cover the open areas. Over 17,000 acres compose this arctic-like, wilderness area, which runs about 49 miles across the top. 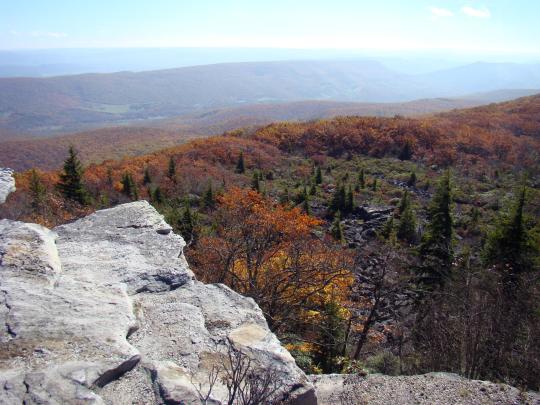 Dolly Sods sets on the Eastern Continental Divide with waters flowing to the east continuing to the Potomac River, while those flowing to the west help form the Ohio River and eventually the Mississippi. In 1852, an article in Harper’s Monthly Magazine described the area as:

…so savage and inaccessible that it has rarely been penetrated even by the most adventurous. The settlers on its borders speak of it with a sort of dread, and regard it as an ill-omened region, filled with bears, panthers, impassable laurel-brakes, and dangerous precipices.

A challenging rocky trail back to the parking lot

At one point in time, a glacier covered the top of Dolly Sods. Walking the trail to Bear Rock, water lays on top of the ground since it can’t be absorbed by the rocks just below the surface.  The trail required careful steps to avoid too much water, and it became very narrow between the low growth of wild blueberry bushes. But in just a little while, the trail turned into one made of rocks and it was a game of hopping from rock to rock to reach the edge.

An interesting sidenote was the fact that the US Army used this area as an artillery training ground before troops were sent to Europe in World War II. Hard to tell what might be found in the rocks and brush. 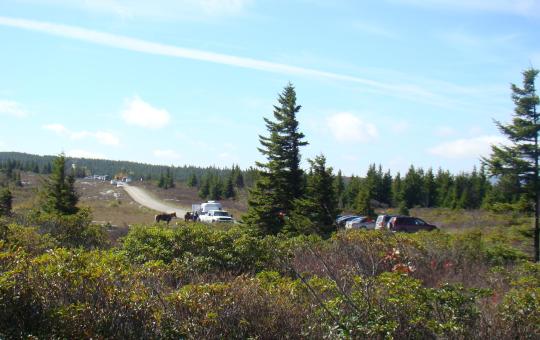 Many seem to enjoy escaping to the world of nature.

Starting back to the parking lot, it was surprising to see how many people were out walking the Dolly Sods on a weekday at a temperature of 49. Had to wonder how they found it!

From Canaan Valley follow WV 32 south to the Laneville Road (WV 45). Turn left and go approximately 6 miles to the Red Creek Bridge, where the road changes from pavement to gravel and is now Forest Road 19.

The Smallest Church in 48 States Our Lady of the Pines