Now it’s time to head to the other side  and walk down the Elakala  Trail. This is a rather rough trail with no steps, just a mountain path. You must be careful of tree roots and rocks in the middle of the path, but the view is worth it. Elakala Falls is a series of four waterfalls of Shays Run, as it cascades down a canyon wall into the Blackwater River below

View of Elakala Falls from the top

The first waterfall can be accessed fairly easily so more photographs happen here than at the other three. That first waterfall spills over 35 feet to continue down Shays Run. A wooden bridge there provides an easy means of crossing for an overview, but you will want to go just a little farther to get the best picture.

Some choose the challenge to continue down to the next waterfall, but jumbled rocks and unsecure footing combine to make it very difficult. Anything beyond the second fall is considered extremely dangerous and not recommended for any but very experienced hikers. No marked trails exist for the other three and the gorge here drops 200 feet. 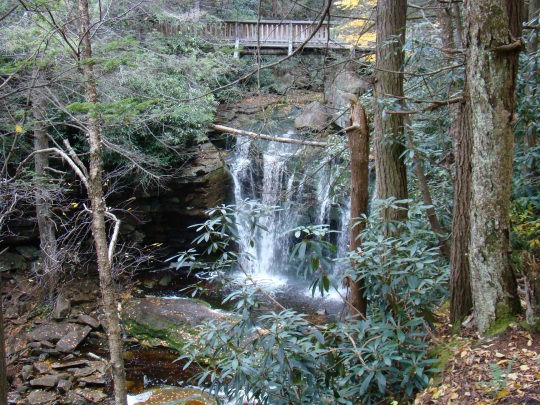 The name for these waterfalls originated from old Native American Indian legends, of which there are several. The one I like best claims that  an Indian princess named Elakala threw herself over the edge of the first waterfall when her warrior scorned her. While it’s impossible to know which legend rings true, this area seems to be a perfect place for those early Native Americans to have lived – near the water and under the many rock shelters present.

Directions to Blackwater State Park travel many scenic routes along the way. These are the clearest directions I have found: Take I-7o E to I-79 S. Stay on I-79 S to Morgantown, WV. At Morgantown, follow I-68 E to Rt. 42 S, Friendsville, MD. Follow to Rt. 219 S through Oakland, MD, to Thomas, WV. At Thomas, take Rt. 32 S to Davis, WV. See what I mean?