“The Rock with a View” describes a visit to Coopers Rock between Morgantown and Bruceton Mills in West Virginia, bordering Pennsylvania. The crowded park grounds gave a festival like appearance with beautiful American chestnut and stone picnic shelters welcoming families and groups to spend the day. Fifty miles of hiking trails provide an outlet for exercise surrounded by nature. During the winter months, these trails are used for cross-country skiing.

But the picnic area and hiking trails weren’t the attraction here. After walking down a short scenic path, you arrived at an immense rock, which serves as a scenic overlook for miles around. Caution must be used on this very steep and slippery rock.

Legend has it that Coopers Rock received its name from a barrel maker, also called a cooper. The story goes that a fugitive hid away from the law for several years under the shelter of the rocks in this vicinity. In his new mountain hideaway, the cooper made barrels, which he sold to people in the nearby communities.

The early history of the area centers around the iron ore industry, with many iron furnaces located nearby as early as 1798. With the discovery of iron ore and limestone, the abundance of hardwood trees for fuel made this the perfect spot for Henry Clay Iron Furnace, which produced pig iron.

Standing on the Main Overlook, Cheat River Gorge appears in panoramic view. Fall is the perfect time to enjoy the scenic gorge and river surrounded by autumn colors. Enormous boulders and cliffs encourage rock climbers and hikers to explore. 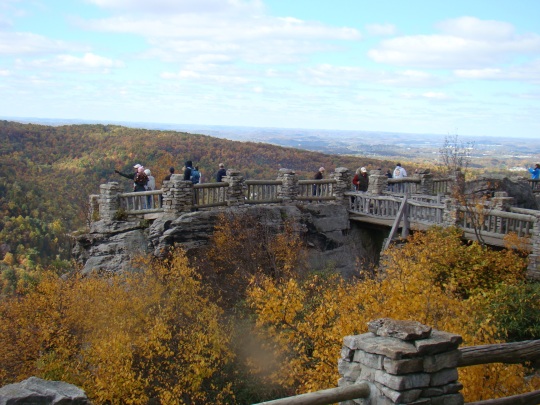 An astounding piece of work is the stone bridge which connects the overlook to the main ridge. The steps were carved out of the mountain during the Great Depression by the Civilian Conservation Corps. The view from the bridge is quite spectacular as well.

During the last few years on Earth Day, Benjamin Gazsi of West Virginia University made eco-sculptures near the parking lot of Coopers Rock to create another reason for people to visit. The Sleeping Giant, Standing Bear and Coopers Rock Turtle are the first three structures to be completed using products of the forest. These characters made of tree branches, mud, grass, leaves, and moss will be enjoyed by visitors until nature returns them to the forest floor.

Access to the park is closed during December until March 31 for motor vehicles, but you can still park at the first lot and walk in. There is no charge for visiting and hiking this fantastic forest. Being in a peaceful spot surrounded by nature clears the mind and relaxes the body.

Coopers Rock State Forest has easy access just east of Morgantown, WV from I-68 off Exit 15. I-68 actually bisects the State Forest into two areas.

Polar Frontier at Columbus Zoo – A Cool Place to Visit