“Ahead of its time” would best describe the magnificent home of Jeremiah and Jane Reeves in Dover, Ohio during the early 1900s. Today, the J.E.Reeves Victorian Home and Carriage House Museum still remain a showpiece of beauty and craftsmanship.

Reeves smokestack still stands in Dover today on acreage behind the home.

But Jeremiah did not always live in such grandeur. Born in England in 1845, Jeremiah began working as a boilermaker in Wales at the age of ten. When he was eighteen, he and his brothers moved to the United States, where they worked in the mills in Cleveland and Pittsburgh. A few years later in Niles, Ohio, they organized Reeves Boiler Works.

When they heard that Dover Rolling Mill was having financial problems, they purchased and reorganized that industry in the growing canal city. Reeves Steel became the backbone of industry in the Tuscarawas County area. The family remained in the iron and steel business for the rest of their lives, but had many other interests as well. 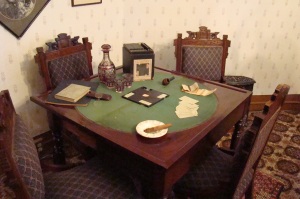 The wealthy played a card game of Whist around the game table.

When Jeremiah needed money to expand his business, no area banks would loan him the needed funds. But that didn’t deter Mr. Reeves. He opened his own bank. Over the years, he also built workers’ homes in Tin Town, a hospital, a streetcar line, Reeves Hotel and much more. Jeremiah definitely held the key to successful business encounters. 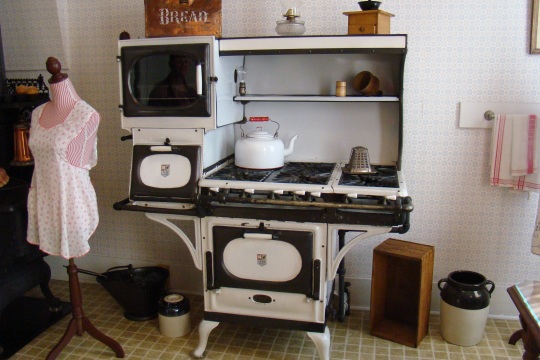 J.E. Reeves wanted to help others by letting them help themselves. During the depression, a man knocked on his door, asking for money to help his family. Mr. Reeves refused to give the man cash, but told him, “I’ll give you a broom and you can sweep the sidewalks. Then I’ll pay you.”

Back in 1901, Jeremiah Reeves moved his family to a refurbished farmhouse on the outskirts of the growing canal city of Dover. Their Dover farmhouse became the most fashionable home for miles around. Mr. Reeves made certain that his family enjoyed all the modern facilities. In the early 1900s, this home had running water, gas heat, and electric lights. Nearly all the furniture and antiques seen in the home were originally part of the family home 100 years ago. Walls contain family photographs and outstanding artwork, while stained glass and leaded windows appear over door frames inside and out.

Next to the home stands a Carriage House Museum with a fairytale like appearance. This fancy barn actually held Mr. Reeves’ horses and carriages, and had space for a workshop.  Today inside this fancy garage, visitors will find a vast collection of vehicles: the family’s hansom, sleigh, rare electric car, and a restored doctor’s buggy. Upstairs the Carriage House features a history of Dover, when it was Canal Dover before railroads were prominent there.

The mansion is open for tours, conducted by outstanding guides, for many special events such as Gatsby Night, Living History Tours, and their elegant Victorian Christmas. On a recent visit during Gatsby Night, entertainment was provided by the Moravian Choir and Big Band. Mrs. Reeves was a devout Moravian all her life, and Reeves Library can be found today at the Moravian College in PA.

The museum has been opened since 1976, when it was sold to the Dover Historical Society by Jeremiah’s grandson, Samuel, for the amount of $1.00. The family hoped that it would be preserved for its historical value…and that has been done with grandeur.