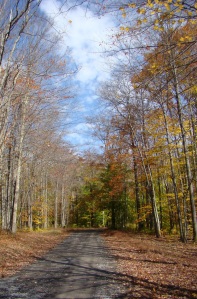 A scenic gravel road through wild, wonderful West Virginia in the fall of the year

Often a gravel country road leads to places that give us a better understanding of our country’s history. Sometimes the things we find along the way don’t look as important as they really are.

Such is the case with one of the most significant landmarks in West Virginia, the Fairfax Stone located at Fairfax Stone Historical Monument Park near Thomas, WV. This stone marks the North headwaters of the Potomac River, which flows all the way to Virginia. Today the original stone is gone, but a replacement stone marks the spot so future generations will not forget how the states’ boundaries were determined.

The reason for the search for the headwaters of the Potomac River came about because the King of England gave Thomas Fairfax all the land from the Potomac River to the Rappahannock River. Naturally, Lord Fairfax wanted to know where the boundaries of his land actually were.

This was part of the Northern Neck Land Grant. The surveying for this western boundary of Maryland was done by Colonel Peter Jefferson, Thomas Jefferson’s father, and Thomas Lewis. Many historians say that George Washington perhaps set the original stone himself as a young surveyor.

Way back in 1746, the original stone was placed there  to honor a boundary dispute between Thomas Fairfax, 6th Lord Fairfield of Cameron and the English Privy Council.. Later it became the spot to mark the state boundary of West Virginia and Maryland. The dispute over the boundary between Maryland and Virginia, later West Virginia, was so severe that it ended by being solved by the Supreme Court. Now it is easy to see its importance.

The original stone was a small pyramid of sandstone and had the letters “F.X.” scratched into the stone. Now an engraved six ton rock with a flat surface displaying an engraved metal plague sets over the site of the actual spring, the beginning of the North Branch of the Potomac River in West Virginia. An inscription on the plaque tells the historical significance of the stone. The marker from 1910 rests close by.

Even though this park contains only four acres, the Fairfax Stone Historical Monument Park attracts many historians, who want to walk where their forefathers trod. Then take a ride just south of here and view some modern history in the making – the Mountaineer Wind Energy Center, the largest wind farm east of the Mississippi that provides electricity to many of the mid-Atlantic states.

Next time you take a drive, perhaps you will want to explore some of those dirt roads along the way. You may be surprised at what you find.