SMART Centre Market opened its doors in 2010 to encourage students’ interest in science.

A delightful Science Centre Market exists in downtown Wheeling, WV – right next door to their historic Centre Market District. This is no ordinary shop as it combines elements of hands-on experience, museum-like pieces, as well as a place to find some unusual gift ideas for those interested in science.

Libby and Robert Strong enjoy having fun as well as teaching.

It seemed the natural thing to do for a physicist and a biologist! 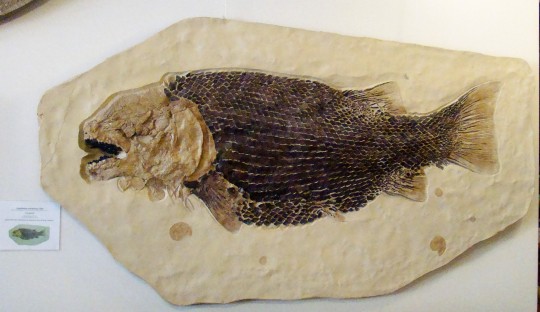 This cast shows the armored skeleton of a German fish with teeth sharp enough to bite through the shells of squid.

A fossil is a snapshot in time, so they feel it important to have original fossils throughout the center. Since originals are hard to come by, some of the larger displays are casts of original fossils, so children can see their size and detail. It is important to keep past science discoveries alive.

This wooden singing tree produced a beautiful song as a marble, made at near-by Marble King, dropped from leaf to leaf.

Around every bend, there’s a spot for hands-on discovery. Robert pointed out that there are two kinds of people who enjoy their place: little kids and tall kids. Even adults need to keep their curiosity alive, and learn something new each day.

This Gravity Well lets children watch a coin go around at high speeds as the coins descend to the vortex tunnel.

This is the place to learn while you play. Children find interesting a line up of scales where they can discover their weight on earth, the moon, Mars, Jupiter, and Pluto. On Pluto, they would weigh the least, and on Jupiter the most – due to gravitational pull. A Gravity Well lets you watch different size coins make their way down the well at different speeds. 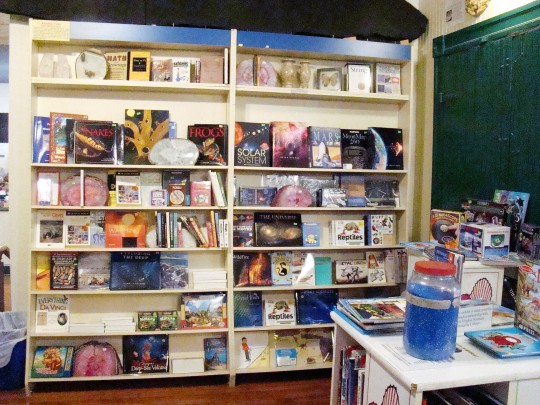 Books on every scientific subject fill the shelves along with science kits to ignite their imagination.

Besides all the activities in the center, the Strongs hold field trips, camps, workshops, and have special open evenings for star gazing. Their main desire is to create a place where kids can have fun learning about science. Robert and Libby bubble over with enthusiasm.

This 1955 game of Wooly Willy shows the magic of magnets as it creates “Magnetic Personalities”.

Everything in the center has an unusual quality. No matter where they sat or stood, the Strongs could point out unusual items such as dinosaur teeth, leaf fossils depicting global plate shifting, or pieces of k-t most likely from a million-year-old asteroid, which coincided with the extinction period of the dinosaurs. All this from one spot!

When Robert was asked about his favorite part of the center, he said, “When the door opens and people begin conversations about science, you are going to learn something.” Those people, who enter through the front door, teach him something from their questions and contributions. “It’s fabulous! It’s a perk being here – people and ice cream.”

The day had to be finished with an ice cream cone, which Robert handed to me upside down…and it didn’t fall out!.That’s the first time a physicist ever made me an ice cream cone and it only cost a dollar. This ice cream comes from Kirke’s Homemade Ice Cream at near-by St. Clairsville.

With a visit to the SMART Centre Market, kids of any age can catch enthusiasm for the world of science. Robert and Libby are prepared to help you light the fire of exploration. Don’t forget the ice cream cone!

Hours for the SMART Centre are Tuesday – Saturday from 10:00 – 6:00. Check out their special events at http://www.smartcentremarket.com

Fashion Shows Can Be Enjoyable