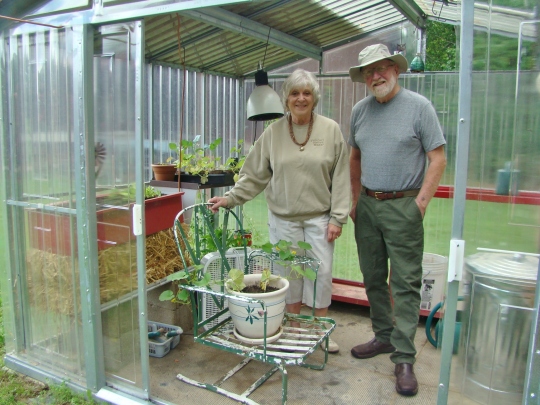 Since they raise most of their own food, their greenhouse was the first thing Maggi and Gene wished to discuss.

Teamwork best describes the lifestyle of Gene and Maggi Jorgensen, the artistic couple from Painters Hollow near Salt Fork State Park. Working together, they have accomplished more than the average couple because they love what they do. “If we can’t have fun, we’re not going to do it.”

Farming runs in Gene’s blood as his dad farmed in New York and white-washed barns to help with expenses. For many years Gene worked as a sheet metal worker, which led him on varied adventures all over the United States and beyond. Once he even climbed a mountain in Peru.

Maggi worked in the engineering department at NCR until its closing. Not wanting to transfer, she trained to become an RN. We’ll talk more about those necklaces she wore to work later.

Stopping by on a warm spring day, the first thing they’re eager to talk about is their garden, “We live out of our garden.” They even pick fresh lettuce from their basement all winter long.

Certain crops, like tomatoes and eggplant, grow best for them in bales of straw. The red ball rests on a decorative iron holder made by Gene.

Their small greenhouse provides the perfect place to start plants for transfer to their garden and straw bales, which produce a bumper crop of tomatoes and eggplant. Their newest experiment this year was starting strawberry plants from seed. It worked! Now they have a small strawberry patch as well. 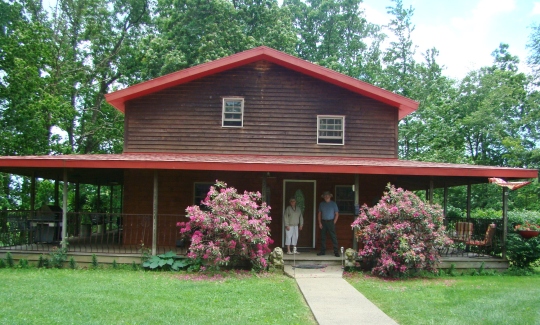 Their home is very important since they built it themselves with pine logs from their own woods.

The lumber for their home came out of their own woods. In 2000, they decided to build using square-cut, white pine logs with foam log tape in between to seal all cracks. This resulted in a beautiful home in the country.

Gene’s dream of a blacksmith shop has become a reality. 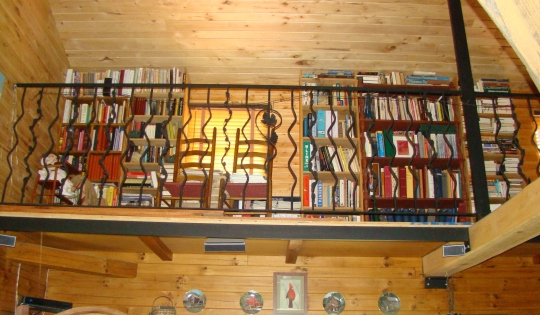 Evidence for Gene’s skill at blacksmithing can be seen in the railings of their library.

Maggi made her first nail, a towel bar and towel rack in that class. Gene has metal creations all over the house inside and out. One of his favorites is making a cross out of a railroad tie. Now Gene has his own magnificent blacksmith shop containing a coal forge and filled with power tools such as: power hack saw, rod shear, punches, and stake plate.

This class has led them on an exciting new adventure. Gene had already been making jewelry for Maggi to wear to work. They were so popular that she sold almost everyone she wore.  Making copper jewelry became a favorite pastime with the blacksmith skills being used to make and repair needed tools.

Wishing to improve her natural creative talents, Maggi took watercolor and acrylic classes. They both want to make themselves the best they can be.

This is a sampling of the jewelry that will be on display at the Salt Fork Festival.

Their favorite metals for jewelry remains copper, which is always covered with a clear shellac. Recently, they’ve added sterling with brass and bronze for special touches.

Rings were a new item in 2017. Gene’s workbench shows the finished rings on the pliers’ handle.

In 2017, Gene began making rings. Five unique patterns come in various sizes. Watching Gene follow the steps for making a ring, it makes you realize how time consuming it is to get that perfect product. This work requires great patience.

Iceboxes are used for storage throughout the house. This one used for bathroom storagem originally served as icebox for Plainfield Store.

Their first show happened in 2011 at Octoberfest in downtown Cambridge. The following year they started sharing their products at the Salt Fork Arts & Crafts Festival. Maggi enjoyed coming to the festivals for years, but never expected to be showing at one. Now Painters Hollow Products have become a popular exhibit. Visit them in August at the Salt Fork Festival.

Gene enjoys his workshop where he can shape metal however he wishes.

Gene and Maggi are perfectly content on their farm. For them, it’s a good life and they never want to leave. They don’t even want to travel, except to craft shows, and their idea of a perfect evening would be sitting on their porch with a glass of wine.

“I’ve got a blacksmith shop and the best partner anyone could have,” explained Gene. As for Maggi, “Life here is fun: the jewelry, garden and everyday life.”

Imagine everyone would wish for that kind of contentment.

Find Victorian Splendor at The Castle in Marietta