Follow the trail those early pioneers took from the Ohio River to beyond New Concord and visit four S-Bridges and two stone bridges along Route 40. While you can no longer drive on any of these S-Bridges, you can walk on their bricks and think back to the difficult times those early pioneers must have faced as they headed to Ohio and westward.

“The Main Street of America” began as a dirt road. Next, they tried logs and many called it a Corduroy Road, but it was very rough. Crushed stone was added called macadam and finally, much of it was paved with bricks. 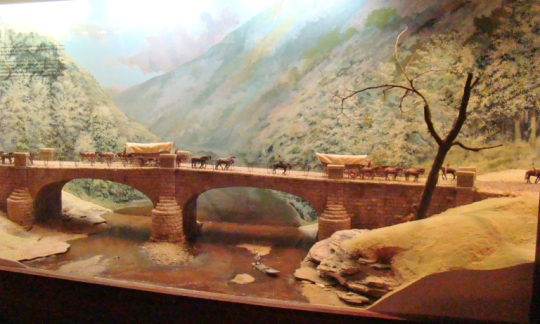 The National Road was one of the first paved roads across the state of Ohio. While it began in Cumberland, Maryland in 1817, it wasn’t until 1825 that the road was built across Ohio until it reached Vandalia, Illinois in 1838. Stagecoaches and Conestoga wagons were the two most common ways of travel, but many rode horseback or walked.

There are many reasons people say they built the S shape. Some claim it was to stop runaway horses, to go around trees or even that the builders were inebriated. The reason was simply an engineering decision.

1938 sign on Salt Fork Creek Bridge: In memory of the pioneer who built this “S” bridge.

Where the road crossed a creek at an angle, a stone arch bridge was built at right angles to the streamflow. “S” shaped walls of cut stone were then built to direct traffic around the jog and back into line with the road on the other side. It also made work easier for the workers as they worked from each side of the creek. The brick roadway made the bridge extra durable.

Here is a short description of the location of each of those S-Bridges and stone bridges along the National Road in the order of their appearance from east to west. 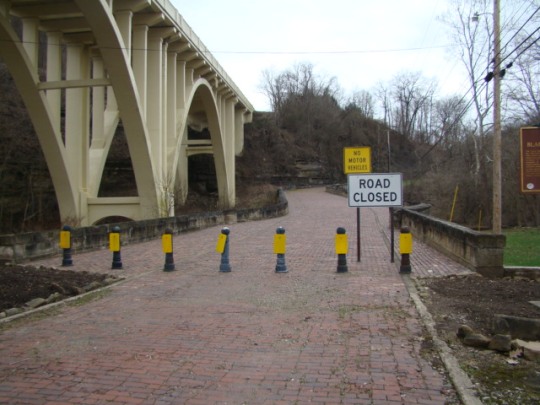 Blaine Hill S-Bridge – Crossing Wheeling Creek near Blaine, Ohio, its three stone arches span approximately 345 feet, the longest crossing of any bridge at that time with a 6.3% grade. This eased the climb out of the valley and was a marvel of engineering. All the original precisely cut stones are there today.

Salt Fork S-Bridge – Just east of Old Washington, you can find a well-preserved S-Bridge, which was near the town of Easton. The bridge is built of randomly laid stone giving it a road width of 26 feet. It was closed as recently as 2013.

Cooks Run Stone Bridge – Only remnants remain of this abandoned stone bridge. When a new bridge was built over Cooks Run, the remains of the old bridge were left underneath. It can be seen about 500 feet off Route 40 about 2 miles east of Cambridge on the north side of the road.

Crooked Creek Stone Bridge – On Manila Road, you can still drive over this Crooked Creek bridge. This is south of Route 40 on the other side of the railroad tracks across from the patrol barracks. While the entrance to the bridge has a large curve, the bridge itself is not s-shaped. 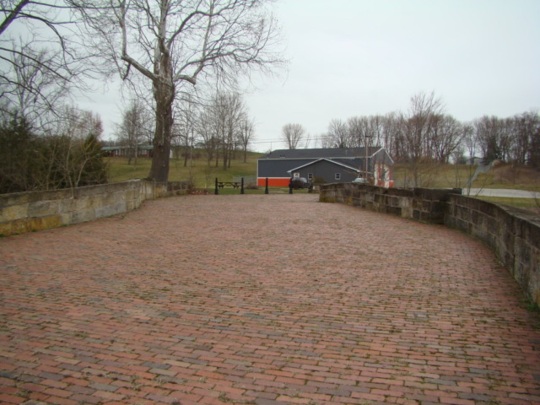 Peter’s Creek S-Bridge- This is one of those bridges that many of us pass quite often on the north side of Route 40 near Pike School at Peter’s Creek Road. There is a small park area to have a picnic or just relax.

Fox Run S-Bridge – On the west side of New Concord, this bridge has been restored and a small area made into a parking and picnic area. My sons fondly remember going here with their grandfather to enjoy an ice cream treat from the New Concord ice cream stand.

Historic signs can be found at the S-Bridges.

Four of these bridges have been found worthy of restoration to preserve the history of our ancestors while others have disappeared. This road was the only link between the east coast and the western frontier during the 19th century. There were four tollhouses in Guernsey County to help with the great expense of building this highway. Congress spent almost $7 million building this 620-mile road.

Take a historic ride along Route 40 in Ohio starting at Blaine, where you can see the history of the developing highway that Abraham Lincoln traveled on trips from Illinois to Washington, D.C. Beside the Blaine S-Bridge is the BlaineViaduct which was built when the S-Bridge could no longer handle all the auto traffic. Just a short distance to the south you will find today’s I-70. From the S-Bridge, you can clearly see the three generations of our national highway system.

Move on to Old Washington and end east of New Concord to view the route of those early pioneers. Imagine the wagons loaded with goods and crops as they traveled the Old National Trail. Perhaps you would have enjoyed being on the road at that time or maybe you would prefer the comfort of today’s travel.