Vane Scott had an attentive crowd at Patriot Plaza in Sarasota, Florida.

This concert was presented before the recent social distancing was put in place.

The 2,800-seat outdoor amphitheater at Patriot Plaza in Sarasota, Florida was recently filled to capacity for Vane Scott’s presentation of “The Many Faces of Old Glory.” The event was sponsored by the Sarasota Military Officers Foundation so American patriots could learn more about the history of the flag of the United States.

The Pops Orchestra of Bradenton and Sarasota provided background music.

This was a repeat performance for Vane Scott as he had previously performed there in 2015 with the backing of the Pops Orchestra of Bradenton and Sarasota, who again provided background music for this year’s flag show. When someone is asked back for a repeat performance, it’s obvious that the show has been appreciated.

Surrounded by the many flags used in the performance, Vane’s dad started this flag show.

Vane credits his dad with starting the flag show back in 1975. Of course, Vane went along to many of those shows and his passion for the story grew. His dad encouraged Vane to learn the story of the flag and they even practiced at the kitchen table when his father became ill.

Soon afterward, he decided to carry on the family tradition.“I needed to tell Dad’s story.” Vane would tell you today, “Dad’s with me every time I do his show. It’s been nine years since he passed away. I miss him terribly.” 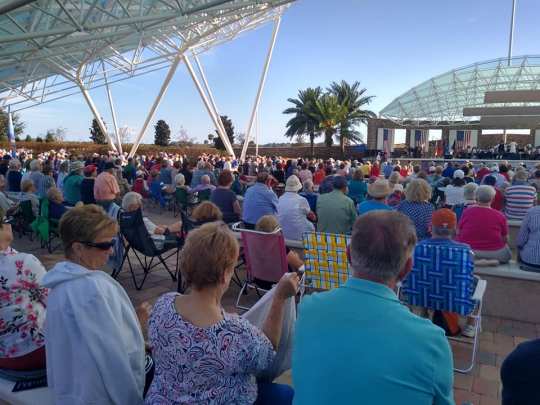 A capacity crowd filled the stadium to hear the history of our flag.

When he was introduced, he told the crowd, “I’m from Newcomerstown, Ohio along with a couple of famous people you might remember. The baseball pitcher, Cy Young, grew up in our area and Ohio State’s football coach, Woody Hayes went to school there.”

He then delighted the crowd of Floridians, many with Ohio roots, by raising his arms and saying, “O-H”. To which nearly 2000 voices responded, “I-O.” The evening was off to a great start!

Vane tells the story as he shares the Bennington Flag from the American Revolution.

“The Many Faces of Old Glory” contains the story of the many steps taken before we arrived at the United States flag we know today. Vane has over twenty different flags that help him tell the story. Some are odd, strange and downright crazy looking so there is humor laced with the history to make the show entertaining as well as informative.

Vane was honored and pleased to have Miss Tampa Lauren Nielsen as his backup singer. She sang “The Star Spangled Banner” as well as “God Bless America.” Vane remarked, “She has an amazing voice and range. She hit those high notes perfectly.”

He still uses the same flags his father left folded up nine years ago. His goal is to help others understand the country’s rich heritage and give us a reason for being proud of our country. 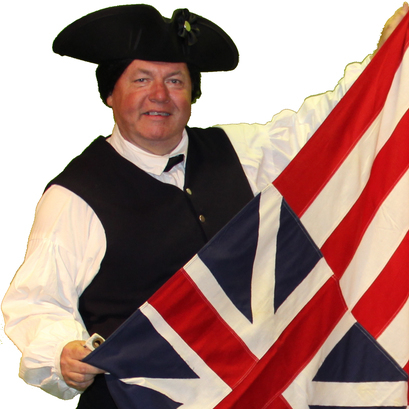 Vane is always ready to tell “The Many Faces of Old Glory”.

While Vane is back home now, he’s always willing to present his flag show when the opportunity presents itself. Perhaps when things settle down in our country, your group might like to contact Vane Scott for a performance of “The Many Faces of Old Glory.”

Vane always reminds the crowd, “We may be born in America, but to be an American is quite another thing.”